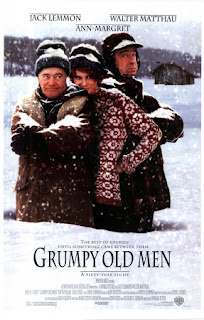 I had a heart attack March 14th 2003 that did extensive damage to my heart muscle. I did not know how much I would recover or if I would ever be able to work again, so I made the decision to move from the Twin Cities to live "up north" with my parents at their place on Platte Lake in Crow Wing County. I think it was in the Spring of 2004 that I learned the bridge that separates Platte and Sullivan lakes is a good place to fish that time of year and so I would go there often. I quickly discovered that there was a group of 3 or 4 older men that fished at the bridge regularly,2 of them fished their almost every day or evening. I enjoyed their company and at times found their antics to be nothing short of hysterical. It wasn't long before I started refering to these guys as the "Grumpy Old Men" when I would tell my parents or others the stories about what these guys were doing or saying that would make me laugh. Once I started blogging I dubbed the bridge the Grumpy Old Man Hole or GOMH.

Naturally, the Grumpy Old Men moniker came from the Jack Lemmon, Walter Matthau movie about two crusty old Minnesota fishermen that always gave each other a hard time. My Grumpy Old Men would give themselves and anyone else fishing at the bridge a hard time. All these guys ever catch is "bullheads." 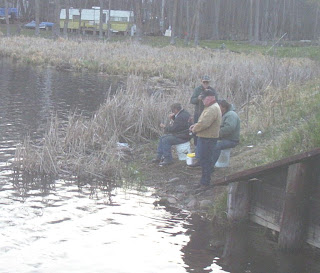 In this picture you can see 3 out of the 4 main grumpy old men. The closest guy in the brown jacket is Willard and he is always talking about something and is the ring leader. The guy sitting on the bucket closest to the bullrushes is Lee Ander who is kind of quiet but loves to talk fishing and gives Willard a hard time. The farthest guy away standing up is Lewis, he is Lee Ander's brother and doesn't usually fish or say a whole lot to me unless we are the only two there. I don't have any pictures of Bud the 4th grumpy old man. Bud doesn't come around much, but he swears more than the other 3 combined in a month unless of coarse Willard gets really mad about something and then you very well might hear a few expletives one after the other. 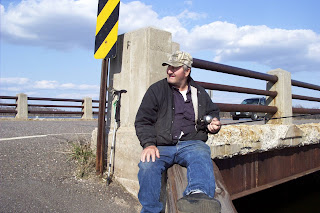 This is Lee Ander after he had to have his foot cut off due to a bad infection. After this unfortunate event he would pretty much only fish from this spot. 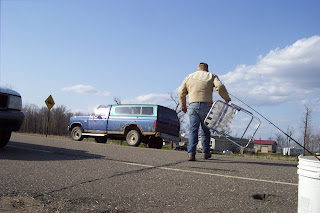 Willard did not want to have his picture taken. Who knew he had a shy side?

Hopefully the Grumpy Old Men will have survived another winter and I will have them entertaining me again in 2009.
Posted by Basspastor at 12:11 AM