Today I was in Brainerd and hit up Fleet Farm and Gander Mountain. At Mills Fleet Farm they had some Dean Rojas Bronzeye, Bronzeye Jr's...

and Bobby's Perfect Frog's on "Clearance." Unfortunately the Clearance lures at the Baxter Mills Fleet farm aren't really heavily discounted, but saving a buck or two per lure was enough to get me to stock up with 3 clown Bronzeyes, 1 toad Bronzeye, and 1 sparrow Bobby's Perfect. You rarely see these lures go on sale here in Minnesocold. The Spro Jr's cost 50 cents more and I elected not to buy any. When it comes to slop frogs I have traditionally thrown the larger size, which I think is an advantage because you get bigger hooks and a bait that makes more commotion on the surface. Am I missing out by not going with the smaller size?

In the clearance bin I could not pass up a pack of Swim Senko's which are supposed to make outstanding trailers when you are swimming a chatter jig. Maybe they will be good on swim jigs too.

At Mills the new X-Rap Shad Shallows were on sale so I picked up a glass ghost(3rd down) and pink, which are my 2 favorite colors for X-Rap jerkbaits and Husky Jerks for bass. 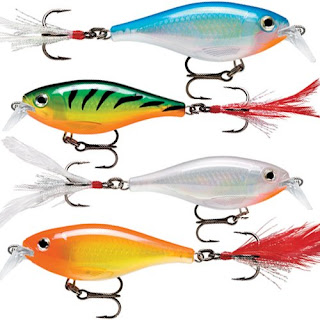 I had thought that Mills was no longer carrying Cubby Mini-Mite's because there weren't any in there normal place but there were several of the knock offs on the shelf.

An employee was stocking near by and I asked him if they were no longer going to carry Cubby's. It turns out the Cubby's were all out of the way over on a far wall with the ice fishing lures. I am now stocked up with glow Cubby's. I went through a full 5 pack of them last year. I elected to go with the 5 pack again instead of the 3 pack with the extra bodies.

I was tempted to buy a panfish rod on clearance because it had the action I look for in a pannie rod , but I think I can get something similar for less than $30. They had quite a few of these rods and so maybe they will be marked down more. I would really like to get 1 more good panfish rod.

Next I headed to Gander Mtn. so I could look there for panfish rods and also see what inventory they will carry for 2009. Last year MT Buckets Mike Thompson and Dave Lindmark from GEM bought some great panfish rods at Gander, but I don't think the Brainerd store ever carried those same rods and it doesn't look they will have them this year either. I did manage to pick up a couple of 100yard spools of 40lb moss green Power Pro; I can't say that I've ever seen Power Pro come in 100 yard spools, but you can bet I was willing to snap up the $5 price difference from a 150yard spool. Generally the Team Daiwa reels I use have smallish line capacities and a 150yard spool is overkill and I end up having 30-40 yards that I can't put on the spool, so the 100 yards is perfect. Gander also had some Yum Tungsten hybrid bullet sinkers on clearance that I couldn't pass up. Turns out these sinkers are going for 99cents a pack online at lurenet.com. It's pretty obvious to me that these things didn't sell, but I haven't found anything negative being said about them, so maybe the idea of a scent carrying sinker was just not a brilliant idea; I most certainly didn't buy them for the scent feature.

And thus ended the bait monkey attack.
Posted by Basspastor at 7:37 PM