I thought that Andy's Bass Blog had managed to beat Holmer of Bass Utopia this year, but then I realized I missed one of Holmer's fish and sure enough the upgrade on the cull was enough to beat out Andy by a quarter of a pound.  That makes it the 5th straight year Holmer has won the Derby.  Overall the top weights were way down this year.  Holmers weight of 26.54lbs would have got him 3rd Place each of the two previous years.

This year we had 2 fish over 6lbs both caught by Carl Spande of BassMN.com.

Vikings Season Over- My Thoughts

I believe, like my brother Todd, that Coach Frazier deserves another season as head coach. However, unlike Todd I believe Offensive Coordinator Bill Musgrave deserves to stay as well.  D Coordinator needs to be gone.  Will I get my wish on this? Probably not, but I put it out there.  If Frazier is gone then Brian Billick is my first choice.

As far as how the season played out.  I am most disappointed with the way Peterson was used in the 3 game stretch from Carolina to Green Bay.  Seriously, what was our play calling about in those 3 games.  It's to bad he got injured at Baltimore, otherwise he would have been in the race for another rushing title this year.

I am equally disappointed that Ponder proved he was not up to the task. To me, the play out of Cassel was only marginally better and I believe the statistics back me up on that.  And like everyone else I have no clue what the deal with Freeman was all about.  I don't know what we should do about QB for next year.  I would prefer we go for a defensive player with our #1 draft pick rather than reaching for a QB..  It was clear to me this year that our #1 problem was our defense, not our QB play.  It will be interesting to see what our off season moves will be.

The biggest positive from the season has to be the play of Cordarrelle Patterson.  We got a bigger, stronger Percy Harvin. 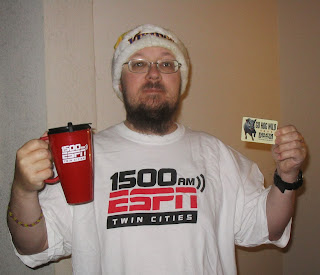 The swag arrived: 1500AM ESPN Twin Cities Mug, T-Shirt, and Mouse Pad and $50 Duluth Trading Co. Gift Certificate that I'm using to get their Ballroom Carpenter Jeans
Posted by Basspastor at 6:41 PM 0 comments

Email ThisBlogThis!Share to TwitterShare to FacebookShare to Pinterest
Labels: 1500AM ESPN, Prizes

Yes It Is Time For An Early C&R Season in MN!!!

Is it time for an early C&R bass season?

The process for getting this looked at has been a little slow in my opinion, but it looks like there is a good chance this will happen in 2015.  There will be a public comment period sometime in the next few months and probably be a hearing or two at the capital.  Providing there is no significant opposition this should pass and I'll be throwing what I want to on the Fishing Opener in 2015.
Posted by Basspastor at 12:03 AM 1 comments