Vikes- What I think they should do now. 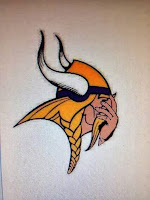 The Vikings made the decision to rush Josh Freeman out to see what he could do versus the New York Giants on Monday Night Football. If you didn't see the game, then you are lucky, because it was Uuuugly!!!  Josh was obviously not ready to play for us yet.  He needs more time to learn the system.  He needs to get his mechanics fixed. And he needs to get his head right.  If I were the Vikings Management and Coaches I would sit Freeman for our next three games minimum.  I would start Ponder verses Green Bay next week and put Cassel as back up.  That is what I think they should do now.
Posted by Basspastor at 3:21 AM 1 comments 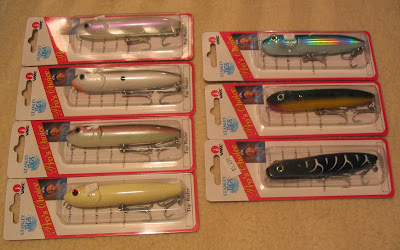 I spotted these Stanley Phantom's in an Ebay auction for 70 assorted lures.  I asked if he was willing to sell me all the Phantom's separate and he was, so we agreed upon a price.  The bone and white one are back ups for one's I already have.  The blue one is the same one I lost these summer when I got broken off.  The black, bullfrog, rainbow, and white with the spot and scales are ones I've never seen before.  With the way the weather is looking I probably won't be trying any of these until next year.
Posted by Basspastor at 8:20 PM 2 comments

Josh Freeman Signing With The Vikes- My Thoughts

I paid a little bit of attention to the Josh Freeman saga over the past week, but I didn't think he would end up with the Vikings, so I didn't pay a ton of attention to it.  I was shocked when I heard he was going to sign with the Vikes last night.  So I have spent the past couple of hours reading peoples reactions and learning more about Freeman.

How Josh Freeman became Greg Schiano's enemy #1 by Bleacher Report pretty much sums up what Vikings fans need to know about how Freeman ended up leaving the Bucs.

As far as reading fan's reactions that is usually pretty worthless, but every once and a while you read something that makes reading through the crap worthwhile.  The comment I thought made the most sense came from the Minnesota Vikings Facebook Page.  This is what some guy named Skyler Geer wrote:

Listen uneducated fans, when Freeman is good he's better than every QB on our roster. That being said he doesnt know our system yet, Cassel is the hot hand.
I think a lot of this signing is to motivate Ponder/Cassel.
Start Cassel the next few games while Freeman learns the playbook see how he does. if it's not good we can throw ponder back in or if Leslie thinks Josh is ready he could be very scary he will throw it which opens up field for AP. Which we just saw Cassel do.
Don't expect to see freeman for 3-5 weeks if one of others plays bad. If we stick w/ Cassel & he plays well freeman may never get a shot here.

The thing that I think it important to realize is that Freeman chose to come to MN over apparently a few other teams.  I think that speaks well of both Frazier and Spielman.  It's pretty clear that Freeman has been seriously regressing and he and his agent believe MN is the best place to get his head straight and turn it around.  Both Ponder and Cassel are now on notice that the future of the MN quarterback position is up for grabs.

Updated 10/9:  The more I have read the past couple of days the more I am liking this deal. At worst if Freeman doesn't work out the Vikes will probably get a compensatory pick.  It seems that Freeman's stats were pretty good last year until the last few games where he threw a bunch of picks.  That apparently coincided with the Bucs not choosing to extend his contract.  That decline continued into this year.  It's pretty clear that the situation in Tampa under coach Psycho had turned toxic for Freeman.  This guy could easily turn into a Stafford like Franchise QB for us.
Posted by Basspastor at 4:18 AM 0 comments