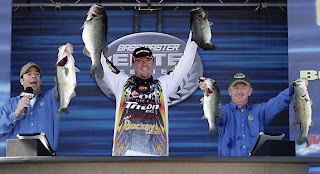 Tonight at 7:15pm (which is now) The Bass Zone is going to have Jason Williamson on.

Update: I believe you can watch a replay of this Wide Open at Bass Zone.com.

They are showing the winning swimbait. It is like an Optimum with kind of a clear green color to it.

Apparently the Legend was following Jason on the water today and saw him catch a lot of his fish.

Talking about Jared Lintner who got 3rd who also kind of came out of nowhere.

Everybody was going for the win today.
Legend "Alton fished the perfect tournament"

Talking Stephen Browning who came in 4th another guy not talked about much.

"What a great way for Rojas to start the season." Apparently somebody non-Elite was in Rojas area today and they smacked a couple of toads.

Ike was just glad to get some points and get out of town. Never found that big load of fish today.

Gary Klien's deep fish pulled off the structure and suspended and he couldn't make them bite.

Bragging about being on the guy today who was on the big fish. Too bad I missed Wide Open earlier today.

The area that I am fishing is just a spawning flat with 10 or 20 feet of water with a drain in it. He has caught them in there every time he has fished the lake. Not a whole lot on Navionics chip to give it away. The locals do fish it.

The winning bait not a whole lot special about it, you just have to fish it slow. Does not think the big swimbaits are for covering water. It is the biggest Osprey Swimbait straight out of the package.

His sack didn't go over 30lbs until the last hour.

Talks about the support of his family.

"Light Hitch" is the color of the Swimbait.

On his way back in he didn't know what to think. Had no idea he had 34+ thought he had just over 30. Thought if he was catching em then somebody else would.
When it gets over 25lbs guessing weight goes out the window.
He thinks the area is a pre-spawn/post-spawn spot but probably.
He finished in the top 10 with only his last 2 days wait.
A lot of guys swing for the fences and it doesn't happen, but this time it happened.

The key to the swimbait bite is to reel it besides the tree. A proper cast is key.

Impact of Marshals, the sport really needed it. Claimse that his Marshal learned more by not fishing than had he been fishing.

Was not sharing his area. There were some local boats were up shallow.
"I learn something every time I put my boat in the water"
"I like to fish for big one's"

Talking Dardenlle, not scared of dirty water. If they bite a jig than I should be OK!

Says his back and arms are sore from throwing the swimbait.

Today was the biggest limit he has ever weighed. His hands were all beat up.
"Bass hands"
Sometimes he did use 2 other swimbaits of the same color with different size and action.
"Last 2 days nothing but a swimbait"
Got a few the first 2 days on a Zoom Monster Worm.

Would retie after every big fish on the swimbait. When the fish is hooked the swimbait runs up the line exposing the line to those sandpaper teeth.

"This solidifies what I am doing and shows me that I can compete"
Jason will take off now, they go to the break before wrap up.

Apparently Mark Jefferies is getting to keep the winning swimbait.

Legend has a Stren Tournament coming up.

Doing their Thank You's: Rudy's Bar-B-Q, Skeeter, Yum, I missed the others.

Will have a twist for Dardenelle. Looking for viewer comments.