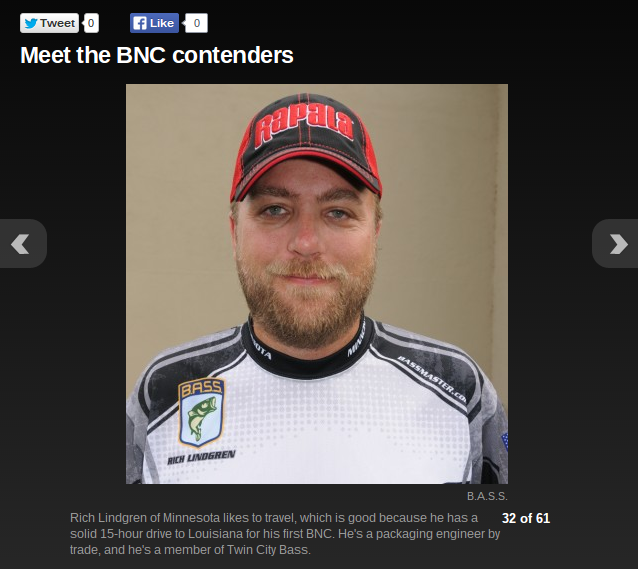 The B.A.S.S. Nation Championship is next week at the Ouachita River down in Louisiana.

I headed to Mille Lacs this morning in the fog around 5:30AM.  I was fishing by 6.  The fact that I didn't see any little walleye's swimming around was a bad sign.  When i t got light out I saw one baitfish jump, compared to dozens I saw on Monday morning.  I did some exploring, saw some ducks and seagulls and left around 9AM.  I tried Erskine, Bulldog, Rock, and the GOMH with not even a single bite for the morning.

I spent the afternoon getting my tackle organized.  The last couple of years I neglected to do this after my last tournament of the year leaving organizing until Spring.  It's a good thing. I needed to do some work on the Tackle Warehouse that I wouldn't have known about otherwise.

I ended up not getting to Rock about 6:20 or so.  It was dead calm.  I decided to throw the Stanley Phantom Topwater.  Sure enough what I'm pretty sure was a nice bass nailed it but didn't hook up.  I tried throwing the craw tube as a follow up bait, but she gone.  On pretty much my next cast with the Phantom I had a fish hit me beyond the weed clumps to the South.  I stuck this one.
That was all I got.

I then headed to the GOMH.  I grabbed two rods and headed to the NE side.  Somebody spoke to me and it was then that I noticed somebody was fishing off the bridge on the South side.  Turns out it was Peter.  After throwing a few casts on the NE side I joined him up on the bridge.  I told him what I've been getting lately.  He didn't get anything, not even a bullhead.  We talked about going ice fishing this winter.  Looks like I am going to have to get my ice fishing gear figured out.
Posted by Basspastor at 11:31 PM 1 comments

Al writes about my club's surprising inability to weigh a 5lb bass this year.  Our big bass of the year was an ounce short of 5lbs.  He was right about the lakes we fished this year.  Only Leech is known as a big fish factory and we hit it on a day the fish just were not going very well.  That was the lake Mick Ziebell got the 4.93lber on.  We fish on average one lake a year known to kick out big fish on a regular basis.  Every lake we fish has the potential to kick out a true hawg for MN, but they maybe only have a couple of them in a whole lake; And those fish are smartest or they wouldn't be that big. 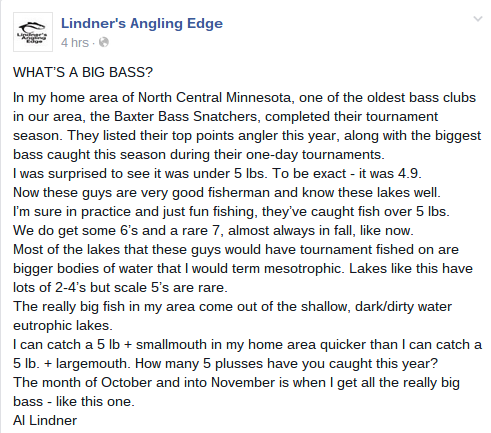 ...Is now up at the Fishing Log Blog, written as if it was written the same day.
Posted by Basspastor at 3:36 AM 0 comments 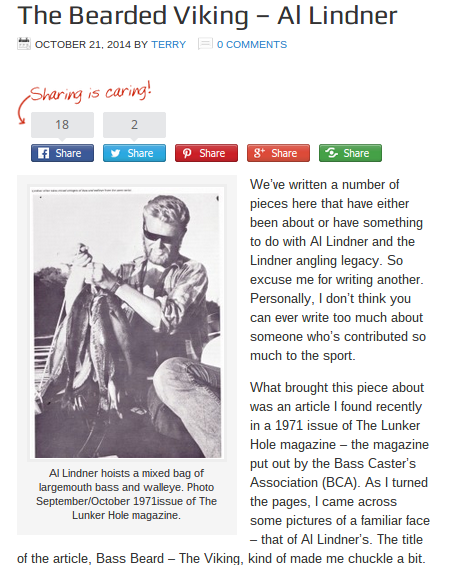 Bass Fishing Archives has a great article from 1971 on Al Lindner and fishing in MN.
Posted by Basspastor at 5:49 PM 0 comments

Got Another Golden at the GOMH

Conditions: Nearly warm and breezy out of the W NW mostly sunny

Rock Lake:
I arrived at Rock at about 6:15PM.  Didn't get anything.  Saw a small fish jump in the floating leaves and out by the reed point.  I left at 10 to 7PM

GOMH:
I arrived at the GOMH and there was this guy Chris from Milaca who had been there since about 4PM getting nothing.  He was waiting for his ride.  I got kind of flustered because I rolled up the window on my St. Croix Mojo Crankster rod when I left Rock.  Miraculously it doesn't seem to be broken; I threw quite a few casts with it down on the NE side.  Chris got a real bullhead while fishing off the South side.  It swallowed his hook and he broke his line trying to get it off.  He threw it back.  Eventually I joined him.  We talked about the Vikes and fishing at the bridge.  He fished there about a month and a half ago when the idiot who trolls under the bridge was there and catching fish.  I was jigging the Grass Pig off of the SW corner when the golden bullhead struck at about a quarter to 8PM.  If Chris wasn't there I probably would have already left.  I let him have it and he was totally grateful.  His ride showed up around 8:10PM.  I fished about 20 more minutes then left. 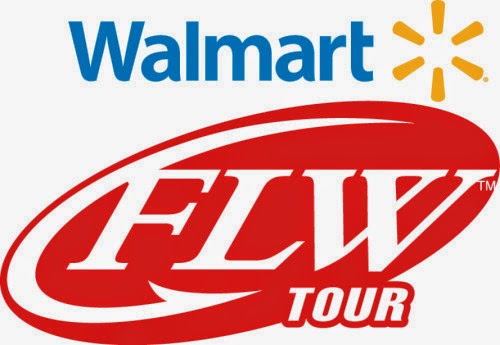 Here is the synopsis from Wired2Fish:

I don't have any argument with any of the changes.  I could care less who's Jersey's a pro wears on any day of competition.  I think making The Cup exclusive to Pro's only was the right move.

Here is FLW's spin on it.
Posted by Basspastor at 3:27 AM 0 comments

My bass club, the Baxter Bass Snatchers 6 man team dominated the Challenge Cup on North Long Lake this year.  They put a beat down the teams from Brainerd Lakes Bassmasters and Range Bassmasters.  Total weight for the Snatchers was 72lbs 12ozs to the Lakes 56lbs 3.5ozs and the Range's 34lbs 9.5ozs.  The top spot and big bass went to Dennis Lothspeich, third from the left, with 17lbs 4ozs (6 fish limit), 4lbs 5ozs b.b..  Bill Ludenia, first on the left, came in 3rd with 16lbs 5oz and 2nd big bass at 4lbs 2.5ozs.  Chuck Steinbauer caught almost 13lbs.

Also on the Team were Keith Tuma, Tim Benson, and Darren Kiefer.

Rock Lake:
Nothing, not even a nibble.  Some deer were running around behind me in the woods for a while.  I left at 6:30.

Jenny's:
Spooked something on my first cast.  Got a Spro Frog stuck in a tree. Left at 10 to 7.

GOMH:
Was just about ready to leave.  I was jigging the swamp gas Grass Pig off the SW corner when a golden bullhead just tagged it. BAM! Not skunked.
That was the only hit I got.

5:30-7:30PM
Conditions same as last night but about 10 degrees warmer wind out of the E SE

GOMH:
I arrived around 7PM and there was a guy and his teenage son fishing on the NE side for golden bullheads.  He said it was his first time out fishing this year.  They didn't get anything when I was there.    I went down to on the SW side.  I tried the Poison and the craw tube, nothing.  I thought maybe I got a hit on the grass pig but wasn't sure.  A fish boiled on the rocks on my side.  I cast there and got myself a golden bullhead.  Well isn't that something?

Posted by Basspastor at 9:36 PM 0 comments

I Caught Some Fish Tonight

After the MN Gophers victory in Football over Northwestern I decided to get my gear organized and go fishing.  First stop was at the Sullivan Inlet, nothing.  Then the Platte River Culvert, nothing.  I missed a hit that was probably a toothy bullhead at the GOMH on a bluegill Pure Poison.  I went by Bulldog, but somebody was there so I headed to the Rock.  I was pleasantly surprised to see the dock was still in the Lake.  On my very first cast out into the lake a bass just hammered the Poison.
The weeds were kind of a problem for working the Poison, so  I went to a black/blue Craw Tube.  I missed what felt like a good fish because my drag wasn't tight enough.  I tightened the drag.  I was throwing what was going to be my last cast when this chub bit me.
I might of had a hit on the Chigger Craw as well.  I left just in time to see the sun setting over Platte Lake.
Last stop was a Jenny's where I got this pike on a Horny Toad and I missed a pretty good swirl as well.

With the weather warming up  I plan to get out a few times this week.
Posted by Basspastor at 9:19 PM 0 comments 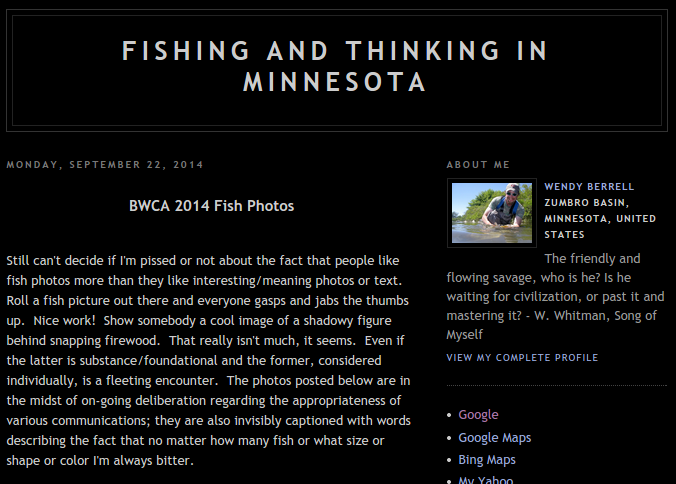 Somehow the blog Fishing And Thinking In Minnesota has escaped my notice since 2005.  Probably because he is a fly fisherman who doesn't fish for bass that often.  I discovered it today while cleaning up my MN Bass Fishing Blogs blogroll from Hats On the Water's blogroll.
Posted by Basspastor at 4:01 PM 0 comments 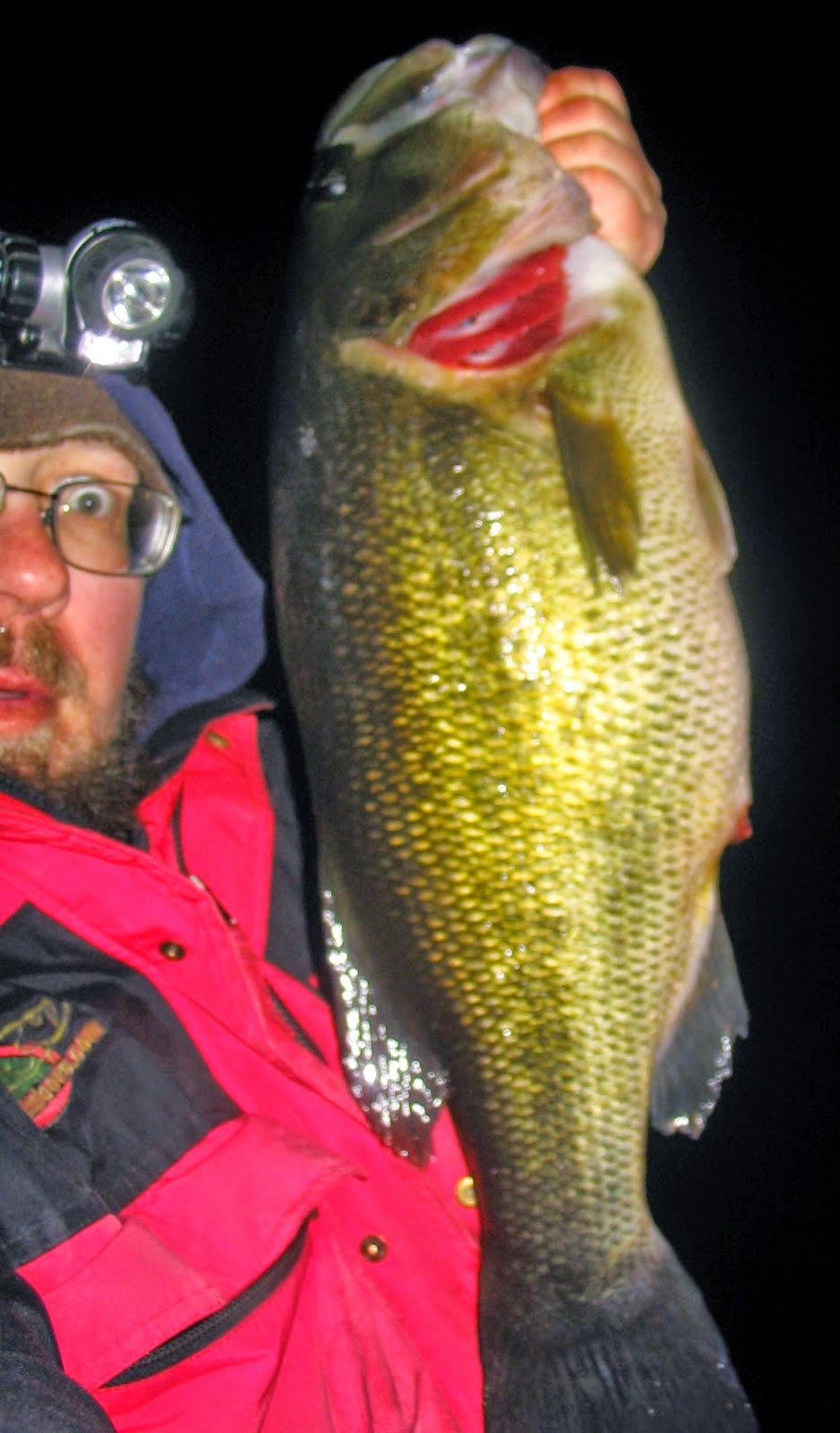 At the top of the blog just under the header there is a row of links to my various blog Pages.  Since 2012 when Blogger first gave me the option to add Pages like this I have done a "Livewell" to showcase pictures of my notable catches from a given year.  I just now got around to finishing my 2013 Livewell and also my 2014 Livewell.

Enjoy!
Posted by Basspastor at 2:21 AM 1 comments 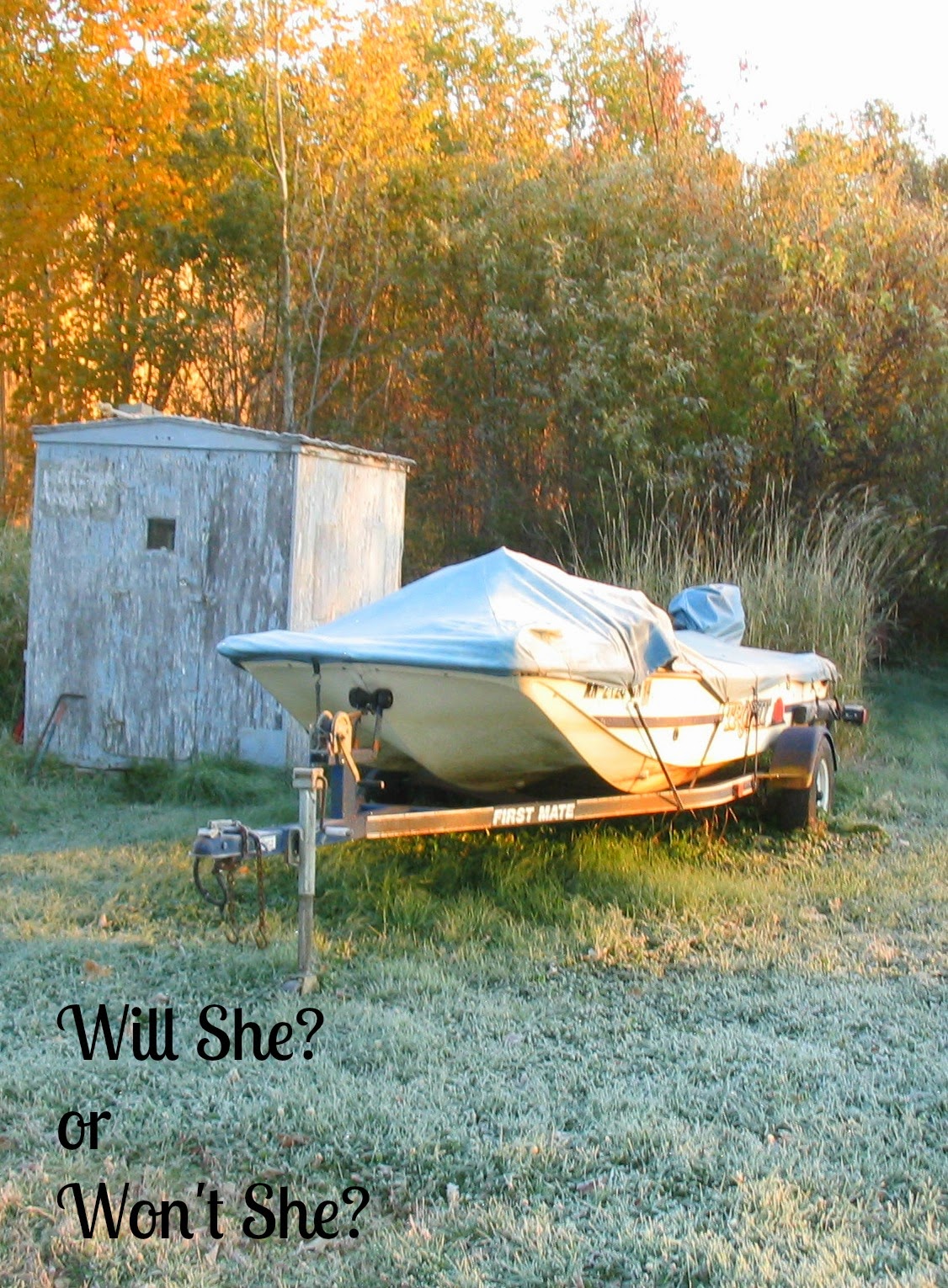 Will the Trophy make it out on the water this year?  I'd put your money on won't.  I have the itch to go fishing, but I think my shore spots still have a descent shot to produce.  The weather is supposed to warm up starting tomorrow, so we will find out soon.
Posted by Basspastor at 9:55 AM 0 comments 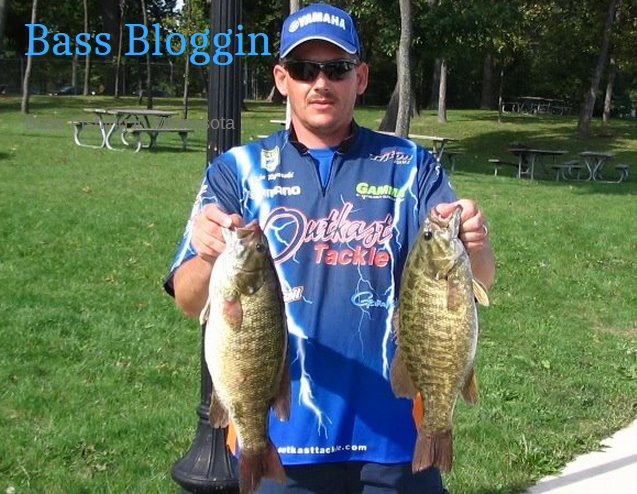 After not blogging since 2012, John Pozarski is back to blogging at least some of the tournaments he fished this year.

Congratulations on the Fishers of Men Whitefish Win John!!!
Posted by Basspastor at 5:08 AM 0 comments