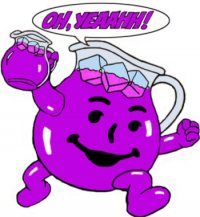 I am not ready to drink purple Kool Aid yet for this year.  The performance in the 3rd pre-season game by our 1st unit was pretty dreadful on both sides of the ball. Hopefully it was just an off night indicative of nothing.  I am hoping Zimmer plays our O-Line starters for the whole first half of the final pre-season game.

I think the offense will be better this year, but how much better is a big ? in my mind.  I think that our D got worn down last year with all the time they had play and our O's inability to score touchdowns.  I don't know how much improvement we need to see to make us a playoff team.  We could be in the mix for a Division title, but then again maybe not.  We will see.

Excitement Level:  Muted for now.
Posted by Basspastor at 3:12 AM 0 comments

I really need to get cracking on getting out fishing with the fishing buddies.

Bass Snatcher Goals:
1.  Get "Wood" in at least one tournament. (1st-3rd Place Finish or Lunker)
2. Win my 1st tournament. (My best finish to date is 2nd Place.)
3. Get "Lunker" in a tournament.   (Preferably one over 5-8 to win the revolving big bass pot that I'm now entered in thanks to somebody finally winning it last year.  With 3 big bass lakes on the schedule there is a shot.)
4. Get paired with Chuck Fields.  (He usually only fishes a couple of tournaments a year so chances of it ever happening are not very good.)
5. Finish in the Top 10 at the end of the year.  (Something I haven't done since 2011)
6. Catch a limit at every tournament of the year.  (I've done this twice, but in 2012 I only fished 4 out of the 6 tournaments due to a bad back.)
7. Pre-fish with at least 3 boaters.
8. List the Rods I'm bringing for each tournament before the tournament.

Blogging:
1. Blog about anytime I reach a goal.
2. Record all fishing trips at Fish Swami
3. Fish at least 150 days and blog about them
4. Do a better job of blogging when the Elites come for the AOY this year on Mille Lacs.

* Catch is anything I deem it to be including follows by pike or smallmouth (while pre-fishing), a pike missing my lure, fish seen on the Aqua View, and fish that get off before I have them in hand that I can positively identify.
Posted by Basspastor at 2:20 AM 0 comments

The GOMH NE Side This Year and Last

The Day:
Not sure exactly what time we blasted off at.  We didn't run very far.  I started off throwing the Whopper Plopper.  After about 15 minutes my boater Mick got himself a decent bass on a craw tube.  I immediately put down the Plopper because there hadn't been a hint of activity on the surface and picked up the Legend Xtreme with a blue/black Chigger Craw on it.  About 5 minutes later I had my first bass in the boat, a 13.3 incher.  Mick then got another decent one and I got a 13.5".  Mick then caught 17 incher and a couple more good one's in pretty short order.  I got a dink next to a dock as we worked our way back over where we had fished.  My blue/black Chigger Craw was trashed so I put on a breen one.  There started to be some surface activity so I started  throwing the Plopper again.  Mick caught his limit fish about an hour and 20 minutes in.  I put the Plopper back down pretty quickly.  I think Mick culled once and I got my big fish of the day, a 15.25"on the Chigger Craw.  I was throwing both the Chigger Craw and a craw tube as well.  I had several fish pick them up and drop it immediately.  Also plenty of bites from sunfish.  The area seemed to go dead, so we headed North to his big fish area.

There were lots of sunfish swimming around, so tried the LiveTarget Sunfish Wake bait.  I saw some boils on the surface so I also tried a bluegill Shower Blows 105 for a while.  Mick started catching some bass but they didn't help him, maybe he culled once or twice.

Mick gave me a red shad craw tube.  I threw it for about 10 minutes without a hit and went to a black/red fleck Chigger Craw.  Mick caught another bass and asked me why I wasn't throwing the craw tube.  He had a good point.  I switched from a 3/8 to 3/16 weight with the craw tube.  While I was fishing the Chigger Craw and the craw tube once again I was having fish pick it up and drop it.  I tried letting it sit or giggling it in place, but they wouldn't come back for it.

It was now a little after 11AM and we headed South.  I don't know which bay we were in but Bill Bailey and Alan Steinbauer were both fishing really close to where we pulled in.  Mick had a small keeper on before I even had my line in the water.  Alan's boat left pretty quickly and we headed that way.  Mick caught another bass that didn't help him.  We went right into the thick coontail and Mick was showing me how he fishes for them in the Fall.  He pulled in a small keeper on his first or second drop.  He then caught another one pretty quickly.  I think I then missed a hit and Mick caught another one.  I missed a couple more bites, but finally hooked up on won just over 13 inches.  Mick sat down and ate a sandwich.  I think I missed one more hit, before me left for the next spot.

The next spot was reed island.  I had a fish just hammer the craw tube after it landed, but when I set the hook there was nothing there.  Might have been a pike.  We fished the area for about half an hour and didn't get anything, so off we headed to what must be eastern most southern bay and fished off of a point.  I got my last fish of the day (13.75) there and missed a couple of hits as well.

My Thoughts:  Mick probably caught 4 fish to my one.  He had me around fish all day and even gave me the color that was working.  By the time I figured out I needed to grind with craw tube it was too late.  My mental focus was good all day.  Disappointing to not get a limit, but I had a good time. 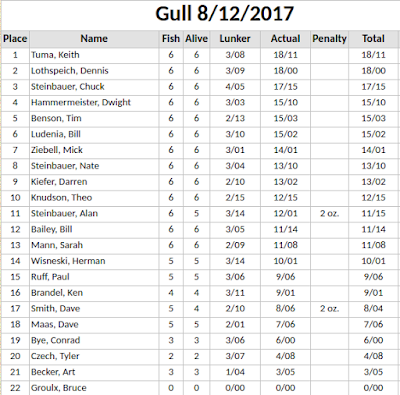 Posted by Basspastor at 3:52 AM 0 comments

I was to worn out yesterday to write this blog.

I was right about my boater Mick being over due for a good day on Gull Lake.   He caught 14 pounds and probably landed 15 plus keepers for the day.  My day wasn't nearly as good.  I came up one fish short of a limit and all but one of my fish was under 13 inches.  I had a lot of hits where a fish would pick up the bait and spit it immediately. Could figure out a way to get them to pick it up again.  Letting it sit and shaking it in place didn't seem to work.  There were a lot of sunfish around to so some of the bites I thought were bass were probably those as well.  I really should have had a limit.  It looks like not getting my limit cost me two places minimum.  It just wasn't my day.
Posted by Basspastor at 5:28 PM 0 comments

For the 3rd tournament in a row I have been paired with a boater I had never fished with before.  This time it's with Michael "Mick" Ziebell.  Mick has been in the club for 31 years now.  He has fished a lot of tournaments on Gull over the years, but has never done particularly well on the lake.  I would say he is overdue for a good finish on the lake.  I didn't get out to pre-fish, but Mick got out a few times and caught some fish.  It looks like light winds for the day and partly cloudy sky's.  Lord, please let them bite on topwater.

Here's the Rods I'm bringing with: