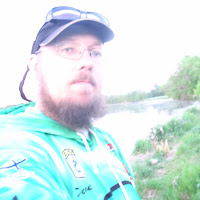 The "Blind" Lake turned out to be the Cullen Chain.  I got a front row seat to Guy Henkensiefken's domination.  He won the last tournament on the chain back in 2011 and he won today and got Lunker/ Big Bass. He also caught a big dogfish.  I had another mediocre day on the water while my boater lit it up.  Once I got my limit I was happy.  I will have a full report after I get the official results.
Posted by Basspastor at 9:01 PM 0 comments

What lake will we be fishing?  Find out at 6:30AM tomorrow.

I'm hoping it's on Pelican.
Posted by Basspastor at 11:43 PM 0 comments

New Topwater Lures For Me 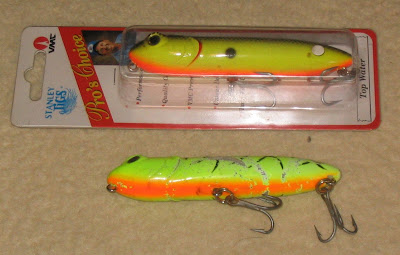 Another Stanley Phantom came up for bid on Ebay.  I snatched it up and I was the only bidder.  As you can see it's close to the same color I crushed them on earlier this year.  The new one has red gills and a black top and the black dot instead of black stripes, otherwise they are the same.  I'm going to just leave it in it's package for now.  It's always nice to have a back up lure.

I also picked up some Strike King KVD Sexy Dawg's. 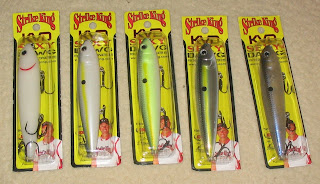 Posted by Basspastor at 6:48 PM 0 comments


Weather: The day went back and forth between partly and mostly cloudy.  Wind was light in the morning building to about 10 MPH out of  the NW in the afternoon. Temps went up quickly from a cool morning into the low 70's.

We went to the mouth of a slop bay and worked our way in.  In the pads I got a 15" fish on a Yellow Spro Frog.  I think that was the only fish we had hit in the slop.As we came out of the bay I think that is were Art got his first fish of the day.  Next we headed to a hump that Guy and I fished in my last tournament on Rabbit Lake.  Art just got done telling me "this didn't seem to be the deal" when I hooked into a quality 16.5" bass on the Chigger Craw.  Next at my suggestion we went to a weedline off of some docks that Guy showed me at the previous tournament. I cast into a clump of cabbage weeds that were on the edge of a weed point with the Chigger Craw.  I thought I was caught on some weeds but then my pole kept bending, so I set the hook.  It immediately jumped showing me it was a bass and it was a good one.  When I got it in I estimated it at 19.25".  I had to estimate it because Art ruler was only 17.5" in length.  Art guessed it was close to 5lbs and I said it was a 4 for sure.  It turned out to be 4lbs 4ozs and won me the Lunker/ Big Bass "wood".  Needless to say I was feeling much more positive about the day at this point.

As we worked our way East I spotted a stick in the cabbage on a reed edge and pulled a 15.25" off of it on the Chigger Craw.  Art got a fish off of some  pads with the wind blowing into them.  I missed a good bite in the reeds with wind blowing into them on a craw tube near our starting spot.  We ended up going to the far West end of the lake.  Art lost a good fish right away on a frog, then he caught a dink that was too small.  We worked around the bay.  I did have one hit in the slop, but it may have been a pike.  As we came to the mouth of the bay Art got one in the pads on a frog.  As we worked our way East I got my limit fish, a 14", on a Hack Attack Jig with a Chigger Craw trailer out of a pad edge that had wind blowing on it.  We got back to Guy's docks and I pulled a 13 incher that didn't help me off of a boat lift on the Hack Jig.  On the next dock I culled out the 14" with a 15" with the Hack Jig.  That was my last bite of the day.  We fished some more slop and Art missed some hits.

Results:  The guys really sacked them in this one.  My 14lbs 6ozs bag was only good enough for 13th Place.  Chuck Steinbauer won his 3rd tournament of the year and second in a row with 18/05.

Thoughts:  Huge thank you to Guy Henkensiefken for showing me the area/ spot where the big bass came out of.

We didn't fish in the East Lake at all.

Turns out Guy is my boater for the next tournament, which is a "blind" tournament where we won't find out what lake it's at until that morning.
Posted by Basspastor at 5:23 AM 0 comments

I guess you could say after the last two tournaments I got depressed.  I didn't get around to writing this report until 2 weeks later after the guys gave me crap for it at the Rabbit Lakes tourny yesterday..  There is really not a whole lot to tell.  In the morning my boater Adam predicted it would take 20lbs to win.  We sped off to his starting spot, an off shore weedline.  Adam got 1 bass there on a craw tube I think.  On the second spot he got one on a jig.  We tried a bunch of different places for the next 5 hours only getting a couple of pike. Finally on the starting spot Adam connected with another bass.  I think we left and came back and Adam got 2 more bass.  We left and came back to finish the day on the spot.  With 5 minutes left before we had to go in  I was just about to say it didn't look good for me getting the skunk today, when I had a hit on my Crazy Leg Chigger Craw.  It was a 3.75lb bass, so I didn't get skunked.

Results:
My fish kept me out of last place but that was it.  I was 2nd to last place for the 2nd tournament in a row.  This time I finished in 26th Place.  Chuck Steinbauer won it with 20lbs even.  This was Chuck's 2nd victory of the season.  Big Bass was 5lbs even.

Thoughts:
I wish I had packed a 2nd Texas Rig Rod.  I finally got the fish after going down to a 3/16th oz weight and the Chigger Craw.  Would it have made a difference, who knows.

This tournament pretty much wrecks my season in terms of my end of the year standings.  I'm going to need 3 strong finishes to have any shot at  making the Top 10.
Posted by Basspastor at 10:38 AM 0 comments

Well today far exceeded my low expectations.  I caught a quality limit and got Big Bass with a 4.25lber.  I was reminded that I have yet to do my full report from Rush Lake two weeks ago.  I'll probably get on that tomorrow.  This is the 2nd time I have gotten the clubs Lunker Award.

I also won another Stanley Jigs Phantom on Ebay today.
Posted by Basspastor at 8:18 PM 0 comments

This will be my 2nd Tournament on Rabbit Lakes.  I fished an Excel Bass Tournament there in late June of 2004 and I fished with the Snatchers there in late July of 2010.  I don't know if those experiences are going to be of any benefit or not. I got out to fish with my boater Art for about 3 hours on Wednesday.  Art doesn't have good track record at the lake.  He also doesn't have a GPS, only an old Garmin fish finder.  I took him to 1 place we got fish on the West Lake and told him about 2 others.  We didn't get anything but panfish hits off the hump.  On the East Lake I took him to 1 weedline where we got fish in the last tournament.  I got 1 bite that I think was a bass and Art mostly retied from a bite off he had in the West lake.  Art didn't like fishing in the wind so we moved.  The next two places we went were spots we fished in the last tournament, but hadn't told Art about; He caught a nice keeper off of one of them.  We did see a couple of other of our guys catch fish.

Honestly my expectations for this tournament are at an all time low.  I just hope I can get a keeper.