Had a fun good day on the water with plenty of fish caught. Unfortunately for me, I didn't get a kicker bite. A limit of 2lbers just doesn't get the job done at this lake.  I think everyone that is in my tier of people in the AOY race beat me.  Making the Top 10 this year is going to be a challenge because as it appears there are 15 anglers with a legitimate shot of making the Top 10 this year.  Who I draw for our next tournament at Gull River is probably make or break for my Top 10  hopes.  Reputation is that it is a really tough fishery and not getting skunked should be my number 1 goal for that tournament right now.
Posted by Basspastor at 11:37 AM 0 comments

Since 2007, a year before I joined the Bass Snatchers, the Snatchers have fished Rabbit Lake very three years.  So this will be my fourth tournament there with the club.  I've fished a "Mini-Bucks" and an old Excel Bass Circuit Tournament that I finished 3rd in when I first moved up here.  I have a lot of experience on the lake and have fished it with some of the clubs best fishermen.  My boater Darren usually brings in an over 2lb per fish average here.   We had a productive pre-fish.  Hopefully, the weather will be a little cooler and cloudier than forecast.  Feeling good about this one, but know I can't take anything for granted in a tournament.

Thoughts Coming In:  We had a very good pre-fish.  I was a little concerned because it was a deep jig bite.  While I can catch fish that way I know it is an area of weakness as I miss a lot of bites.  My boater Bill Lundenia is a jig master.  I figured I would see if they would hit a craw tube, which I'm much more comfortable with and switch if Bill was catching them on a jig.

The Day: We went South to start where the fish were bigger on average in pre-fish.  I started by throwing a River2Sea Bubble Walker over the calm lake.  A pike jumped about 5-feet in the air and was my first fish in the boat.  After about 10-minutes it was clear that any area fish didn't want it on top, so I switched to the craw tube and pretty quickly got a 2lber.  I got one other 2lber, but it was not happening so we went to the "Smallmouth Hole".  I picked up a quick keeper as did Bill.  Then Bill had a 3lber throw his jig. I got a couple more 2-pounders on the craw tube.  We then went to a hump and I got 2.66lber on the craw tube.  The sun came out.  We tried one more spot in Farm Island then headed for Little Pine.

Bill got a bass in Little Pine on the jig, so I switched to the jig immediately.  I missed 3 or 4 bites.  Bill was missing bites and getting bit off.  It was dead calm and minnows were skittering around above the milfoil, so I thought I would throw a few casts with the Bubble Walker.  On the second cast, a 3lber took it but immediately jumped and threw the bait.  Bill then had a good fish break off at the rod.  He was looking for his line; The fish he lost jumped and immediately my lunker of the day (3lbs) struck the topwater.  I got a bass that didn't keep on my very next cast.  That all happened in the span of about 6 casts for me.

We went back into Farm Island and fished some docks.  I tried out the Neko Rig like I said I was going to do.  I got one that almost helped me breaking my Techna AV rod in the process. I got a couple of dinks as well.  We went back to everywhere we fished in the morning and I had a few fish pick up a brown/green pumpkin craw tube.  We ended the day watching Checkbook snatch a good one.  Bill only got 5 keepers in the boat.

Results: My fish went 14/8 which put me in 4th Place and allowed me to be the Co-Angler Champion.  The tournament was won by Tim Benson with 16/2 and Tim got "Lunker" with a 3/08 fish.

My Thoughts: A good day for me, some tough luck kept it from being a good day for Bill as well.  I may not switch a thing up for the next tournament at Rabbit Lake.

Posted by Basspastor at 3:46 PM 0 comments

Bill Ludenia and I are Boat #1 out tomorrow.  It will be interesting to see where Bill chooses to take us because he caught nice fish everywhere we went pretty much when we pre-fished on Wednesday. I only caught 2 fish, but they were good ones.  If they bite tomorrow like they did on Wed. I should be in good shape.  It's going to be sunny with very little wind, so it might be a grind.  I'm breaking out the Zoom Speed Craws which I haven't used in years and trying something I've never thrown before ever, a neko rig.

The Tale Of My Other 25hp Johnson

I had mounted my new to me 1993 Johnson 25hp motor back in May of 2010, but there was something about that motor I didn't trust.  Electric start, but it didn't have a pull start as back up in case the battery died or something like that.  There was an eBay auction, I think in June 2010, with a 2001 25 HP Johnson that had an electric start/pull start, so I bid on it.  I didn't win the bid, but the winning bidder backed out and I was given the chance to buy it for my bid amount.  I decided to take him up on the offer as had I won the original bid I was going to get the motor.  So Dad and I drove up north of Bemidji to go and get it.

I had been using the 93 Johnson for a couple of months by then and was pleased as punch with it.  So the newer motor just sat in our garage, then in the pole barn.  I didn't give much thought too it.  So this year on Sunday, June 2nd the older Johnson broke down.  My hope was that it would be a quick fix and I would be up and running in no time.  Pete was coming up the next weekend and he would be able to fix it if that was the case.  That wasn't the case. A part had to be ordered and Pete lives in Lake City in SE Minnesota. I was so depressed out about it not being a quick fix I just shrugged off Pete's suggestion that we get the other Johnson and put it on. Pete went back home and I was catching eyes at Mille Lacs at Eddy's Jetty, so things were OK my world.  My brother Todd got back from his two-week long family trip to Alaska the last week of June. It became clear during that week that trolling motor only fishing wasn't cutting it.

With Todd and Steve both up here over 4th of July week.  We got the motors switched out on the 3rd.  The maiden voyage was a success and now hopefully we are good to go on "My Other 25hp Johnson."
Posted by Basspastor at 3:52 AM 0 comments

Email ThisBlogThis!Share to TwitterShare to FacebookShare to Pinterest
Labels: Johnson Story, The Other Johnson, Trophy Story

The Day:
My boater Tim was confident we would crush them.  The fish had other ideas.

We started outside a small cove along the South shoreline.  Nothing there.  I started topwater, then went to spinnerbait, then to a jerkbait, then back to a smaller topwater.  As we got to a rocky shoal at the cove entrance Tim got his first keeper a small smallmouth.  I'm not even sure what he was fishing with.  We started approaching some docks.  I think Tim caught a fish and needed to re-tie so I went to the front of the boat.  I had a fish hit my Shower Blows when I wasn't paying attention and lost it half way to the boat.  It was just a small keeper, no big deal right?  A little way down the shoreline I got my big bass of the day on the Shower Blows.  It was a smallmouth that went about a pound and 2/3rds.  That was it for me for quite a while.  We jumped to a couple of reefs.  Tim had a good smallie break him off because he had his drag set too tight.

Tim was drop shotting and hardly getting a bite.  That really played with me mentally because I just was not prepared for the day to go down like that.  Finally, about 3 hours in we headed for some bullrushes.  Tim got a good largemouth on his second cast and then quickly missed one.  I missed hit on my frog in some small pads.  I then got a small keeper off the back side of the rushes.  Tim started culling and I got one that barely went over 12-inches.  I missed a couple more bites in the rushes.

We went and tried some other spots.  I got a couple shorts off of a small point.  We went back to the start spot and Tim got his big bass, a 3lb smallmouth.  It just wasn't happing there so we jumped a couple of offshore spots.  Tim had a smallie get snatched by a muskie when he was bringing it in.  He fought it for a couple of minutes before the muskie let go. Then the smallie got off Tim's line just like that.  It wasn't a very big one and when it got off the muskie was in hot pursuit. We went back to the bullrushes to end the day.  I missed one bite on a frog and I think I missed a couple that hit the craw tube but could have been rock bass.  Who knows.

Three small fish, what a disappointment!

My Thoughts:  I didn't fish well.  For some reason, I was checked out mentally for most of the day and just couldn't get comfortable with what I was throwing.  I just think I was so unprepared for fishing to be so difficult.  For at least the last two weeks of June catching bass for me became a difficult proposition.  Not sure what it's gonna take for me to get out of this rut.  I better find my mojo quick because the next tournament is less than two weeks out. 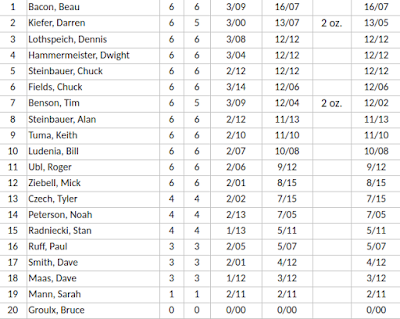 Posted by Basspastor at 5:17 PM 0 comments