Out With Some New and New to Me Equipment

Today was the maiden voyage for my ION Auger, my new to me Polaroid Dual Screen Waterproof Camera and the "Selfie Stick" my brother gave me for Christmas.  Impressed with the Auger, not so much with the camera or ice thickness.  But I'm not gonna complain about the camera as I got it cheap.  The ice thickness was only about 14 inches and I won't drive the Expedition out until it is more like 20".
I think I will bring both camera's with me for as long as the Power Shot still works.  I'll keep the Polaroid mounted on the selfie stick.

The sunfish were active today.  I got a couple 7 inchers and this 8" that broke my line, but I managed to grab it before it got away.
I got the crappie before I broke the jig off.  I wasn't going to retie as it was prime time.  I put some smaller minnows on the Glow Demon and got a few crappies on that and a Glow Demon with a waxie and Gulp Minnow;  None over 9.75".  Also I got this bullhead that came through suspended about half way up in 15 feet.
1 Bullhead
12 Sunfish
9 Crappies
Posted by Basspastor at 12:05 AM 1 comments

I started my Livewell 2016 with a 13" crappie I caught this year and I'm pretty sure all my notable catches from 2015 are now in my Livewell 2015.  Please click on the links and check 'em out.
Posted by Basspastor at 6:54 AM 0 comments

Email ThisBlogThis!Share to TwitterShare to FacebookShare to Pinterest
Labels: Livewell

Last Saturday I was unable to attend the first Bass Snatcher Meeting of 2016.  Here are the Lakes they came up with for 2016.  The dates and lakes won't be official until after our Feb. meeting.  I've fished at least one tournament on each one of these lakes.

I think we are a little sketchy on Mille Lacs as bass might not be in season yet;  It depends on what the DNR does with the regulations there this year.  I think I am in favor of going to Mille Lacs provided the season is open.  I believe this would be the earliest tournament in the history of the club.

I hope Platte/Sullivan stays.  The only bummer being that if it's a hot bite I can't fish the lakes on Thurs. & Fri due to our clubs "Off Limits" Period.  I will definitely be putting the Trophy in the water this year if Platte/Sullivan stays on the schedule.  The last time we were here was in 2011.

Fish Hook Lake is southwest of Leech just North of Park Rapids.  It's a lake that has fished really well for the club and 2011 was the last time the club fished here as well.

Pokegama at Grand Rapids is a lake that has just about everything a bass fisherman in MN can want.  When we were last there in 2012 I was dealing with lower back problems and that was the last tournament I was able to fish that year.  Maybe this will be the year I get a smallmouth there.

Rabbit Lakes have been good to me in the past.

Gull Lake I've only fished two times, both tournament days.  I've always caught fish and this could be prime time for a topwater bite; Bring it!
Posted by Basspastor at 8:03 AM 0 comments 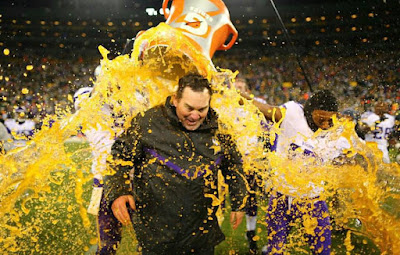 4 Species For My Birthday

I got out earlier today hoping to use the Aqua View.  There was no fish where I had visibility and not enough visibility where there was fish.  I started where I got my fish yesterday.  There was nothing doing.  I moved a little shallower and there were perch there stealing my waxies.  I did catch one.  At 4 I went back to last nights holes and some sunfish moved in.  Then I got the pike.  Then crappies moved in.  I got 4 that were 10"ers.  Last fish of the night was a sunny.
1 Pike
1 Perch
8 Sunfish
13 Crappies
Posted by Basspastor at 11:29 PM 0 comments

Yesterday I went and got water for my minnows at Rock Lake and people were running wheelers on the lake, so I knew it was safe.  Today I got out and there was no one in my area but there had been a spear house there recently and somebody had drilled holes I was able to kick in.  I ended up drilling two additional holes.  First 5 fish were sunnies, the biggest was 7.75" out of about 15'.

What I Caught Pike And Walleye on in 2015 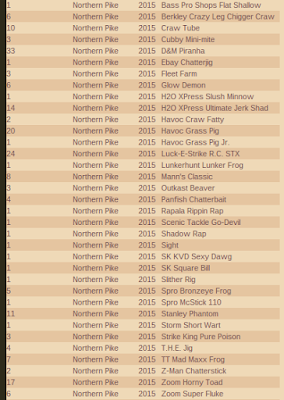 Walleye numbers were up slightly this year with 32 fish caught.

Posted by Basspastor at 1:22 PM 0 comments

Email ThisBlogThis!Share to TwitterShare to FacebookShare to Pinterest
Labels: Pike, Walleye, What I Caught Fish On

The 2 sight fish and half of the Fluke fish weren't actually caught.  They were follows.

As for the LM 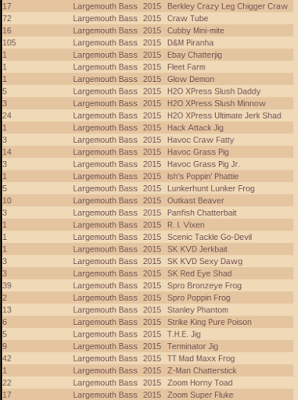 I only caught 450 largemouth in 2015, a significant drop from the 602 I caught last year and way off the 922 I caught in 2013.  This was by far my worst year for catching largemouth since I started keeping track at Fish Swami in 2011.  I am blaming the normal Spring ice off and low water at Platte/Sullivan for most of the drop off in fish caught.  The GOMH just wasn't holding fish like it has in the past.  Instead of getting 10 or more largies per trip, I was getting 5 or less.

The positives I can take from 2015 were the number of fish I caught on Spro (41) and Mad Maxx (42) frogs and the 24 fish I got on the H20 Jerk Shad.  Also for the 1st time a chatter jig was my best largemouth lure of the year with the D & M Baits Piranha being the only lure in triple figures.  Some memorable hits this year on the frogs and the Piranha.
Posted by Basspastor at 11:09 PM 0 comments