Conditions: 60-73℉, Cloudy for most of the day, Light Wind WSW
Water Temp: 76℉ maybe
The Day:  The first spot we stopped at was at a hump offshore somewhere where Dwight caught a good one while pre-fishing.  We both started out throwing topwaters, but with there being a bit of a breeze I quickly put the popper I was throwing down in favor of a junebug color Evergreen Jackhammer.  On about my 5th cast, it was fish on.  I could tell it was a good fish, but it wasn't exactly fighting like a bass.  Turns out it was a nice walleye, maybe 23-inches long.  About 5 minutes later I got a pike.  That was it for the starting spot.  We tried briefly aways off of a point, not getting anything.  Then we tried close to some reeds.  No bites there.  Then we headed out to where I had the big bass miss my topwater in pre-fish. 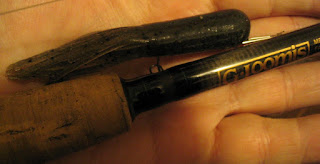 On my very first cast with the same smoke colored tube I used to catch some fish on my first ever tournament on Pelican Lake in 2009 I got the skunk out of the boat for myself with a 1.75lb bass.  That was the only bite we got out there.  Next, we went to the reeds on the South side of the island.  Dwight had we thought was a 2lb smallmouth hit at his lure, but not get it.  We then briefly fished off a point and on the north side of the island not getting anything.  Next, we headed to the reeds on the south side of the entrance to Breezy Point Bay.  I had a good fish take my Hack Attack Jig, but it came off as I tried to bring him through the reeds.  Pretty quickly after that Dwight got the skunk out of the boat with a nice one.  Dwight then added a small keeper after missing a couple of bites.  I had a fish hit the Jig, but I swung and missed.  I pitched right back to the spot and got a small keeper.

Next, we were gonna fish some other reeds, but another tournament boat was fishing out in front of them, so we fished a sunken island instead.  Pretty sure this was the spot Dennis started us on back in 2009.  It was calm, so I got out the good old bullfrog color Frenzy Popper I used to catch some fish on back in 2009.  Sure enough, I had a fish hit it, but not hook up.  I threw back to spot missing it by several yards.  A bass that was just over a pound and a half was on it.  Not sure if it was the same fish or not, but that was the only bite I got on the popper for the day.  We next went and tried the reeds, but Dwight didn't like them and we quickly left for a cabbage area somewhere on the eastern side of the lake.  There was a bit of a chop and I elected to throw a swimbait and was quickly rewarded with a small keeper.  Next, we went back to the area where I got my first keeper and I got a 2lber there on the swimbait.  We tried running South, then back to the starting spot.  With about an hour left we went back to the reeds where we caught fish.   They now had the wind blowing on them and we didn't get any bites.  With about a half hour left we ran some docks.  Dwight got a small keeper and a short.  He also had a what was probably a small keeper come off.  With 10 minutes left, we were getting over towards a large swimming area when we came to a dock that was right on the break.  Dwight got a good keeper.  I then briefly had a fish on.  A few casts later I got a 2lber on a green pumpkin Jackhammer.  I was pretty pumped.  My last bite of the day was a nice pike that hit the junebug Jackhammer.  And then time was up.

Results: My limit weighed 10lbs 4ozs and put me in 10th Place out of 21 anglers fishing.
Dennis Lothspeich won with 19/2.  Chuck Steinbauer had "Lunker" with a 4/12 largemouth.  Beau Bacon was the Co-Angler Challenge Winner with a 18/6 bag, which was 2nd Place for the tournament.

My thoughts:  There were only 8 limits caught of which mine was the smallest.  I am pretty darn proud that I managed to catch a limit.  With two tournaments remaining I still have a shot at finishing in the Club Super 6, but it's an outside shot with 4 guys ahead of me right now for the 6th Spot.  One more finish in the Top 8 should pretty much guarantee I reach my goal of finishing in the Top 10 for the year. 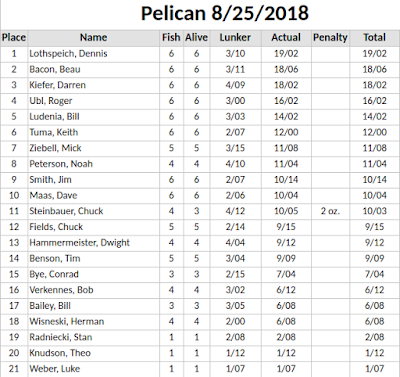 Posted by Basspastor at 5:02 AM 0 comments

As predicted the tournament today was indeed a grinder.  I didn't get my limit in the boat until the final 10 minutes.  My boater Dwight only got 4 keepers.  Only 8 limits total out of 21 guys fishing. I finished somewhere in the Top 10. Dennis Lothspeich got his second win in a row.  Full report after I get the official results.
Posted by Basspastor at 10:44 PM 0 comments

Probably gonna be a grinder.  Thankfully it is supposed to stay on the cool side all morning and light winds.  Hopefully, there won't be a fog delay. Just hoping for 6 keeper bites.

The smallmouth front is looking pretty pathic this year.  I haven't caught one yet.

I also surpassed my goal of 500 pikes for the year sometime late in July.

Posted by Basspastor at 2:21 AM 0 comments

July Was A Froggy Month 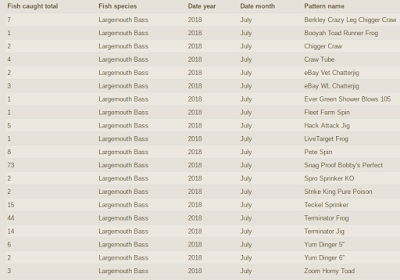 That is 73 bass caught on the Bobby's Perfect for the month.  Thanks to all the fish I caught on the lure in July it has eclipsed the craw tube as my #1 bait for the year.  I've caught 100 plus fish on three different frogs so far this year.

Posted by Basspastor at 5:13 AM 0 comments