My Snatcher Season At The Half Way Point 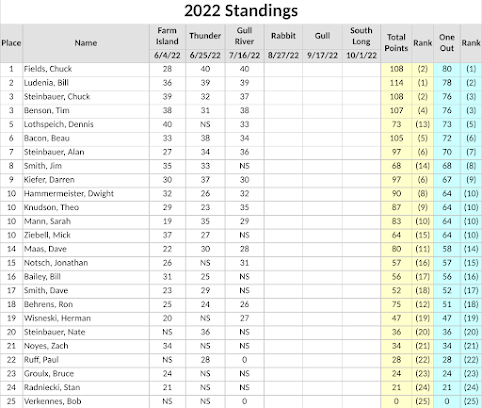 I got off to a less than mediocre start on Farm Island. Didn't fish clean on Thunder, most likely costing me a top 10 finish. Then I struggled to generate bites on the Crow River. So I have dug a hole for myself that will take a really strong finish to land me into the Top 10 at year's end. I think I am going to need at least two guys currently in the Top 10 to only fish 4 tournaments this year, and even then I think my chances are well under 50%. 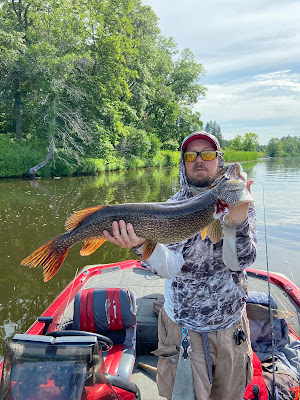 Conditions: Periods of clouds and sun, 70's to upper 80's, a bit humid, light winds
The Day:
I was so disappointed that my Tackle Warehouse order did not arrive on Friday, but such is life. We blasted off as boat #4 and headed West, getting passed by Snatcher Dennis as we headed up river. Our first and second spots were slop areas on adjacent sides of the river, and we didn't get a bite at either place in about an hour of fishing. So we headed up river farther, and Bill got a quality smallmouth right away on a popper. He then got a rock bass and a couple of non-keeper smallmouths. I got a pike on a lipless Frenzy and a rock bass on a Jackhammer. I also had something that felt quality on for a few seconds on our second pass down by where Bill got the smallie.
From there, we headed up in sight of the bridge, and Bill popped a nice large on his first pitch. I think I got a pike and rock bass, and Bill got a couple of non-keeper smallies and rockies. I think we moved down the river just a little way. Bill got a nice smallie throwing a Senko by the shore and a fourth nice keeper smallmouth in the middle of the river. We pulled in behind Snatcher Al, where Bill got his first keeper; Bill got a non-keeper smallmouth.  We went down river a little way, and I got the big pike which put up a good battle. I took my time with it, and Bill eventually netted it and took pictures. I wasn't too pleased because the day was more than half over, and I didn't have a bass in the boat yet. We worked a shaded bank and didn't get anything. So next, we headed back to where the river narrows to the East of the public access. And started working our way West fishing wood. Bill got his 5th keeper pretty quickly. We continued working wood. Finally, I got a keeper in the boat out of some weeds and wood, and it was a good one, 4lbs.
There was a slop area just upriver from where I got my fish, and in the next 10-minutes, I had my bag for the day, catching two quick fish on a frog. We then went back up river to our second stop working that slop bay better than we did the first time. I got one 11-inch largemouth on a frog. Then we crossed the river expanding on our first area of the morning. Bill had to miss 5 or 6 bites on his frog before he finally got his limit fish in the boat, which was a quality largemouth. I think he then caught one that didn't help him. For the final 20-minutes, we worked the slop area by the access. I had a fish boil on my frog but did not get it and didn't try again. And then the day was done.
Results: My 3 fish weighed 7/13, which put me in 13th Place out of 17 Anglers, two of which blanked. Chuck Fields made it back-to-back wins with a 17/01 bag, and my boater Snatcher Ludenia made it back-to-back as runner-up with a 16/12. Lunker went to Snatcher Sara with a 6lb Pig. 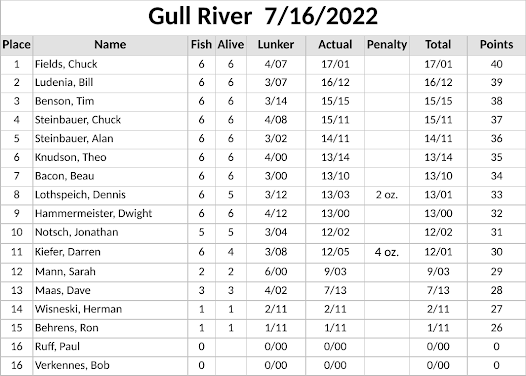 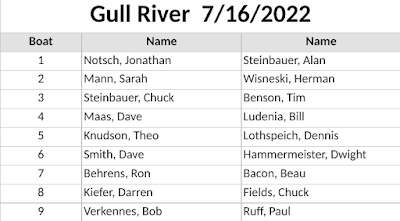 The Plan: It is tournament week, and this Saturday, we will be fishing the Gull/Crow Wing River. This will be the second time the Snatchers have fished it since I joined the club. The previous tournament was in mid-August of 2019. Unfortunately, I was unable to pre-fish. On the good side, I drew Snatcher Ludenia, who knows just about every fishery we go to well. He has a track record of bringing in limits here but on the small side. I am on the hunt for giants and bringing the heavy artillery. I am guessing Bill will be pitching a jig. If I can get hits on a frog/toad,, I will do a lot of that.
Update: So I talked to my boater, and it sounds like we will be fishing for smallmouth most of the time.  Made some adjustments. Unfortunately, a shipment of baits from Tackle Warehouse that was supposed to arrive on Thursday got delayed and didn't make it. Bummer!
Rods I am bringing:
7'4" H Zillion (Jig)
7'4'' H Tatula (Frog)
7'4" H Tatula (Swim Jig)
7'4" H Tatula G2 (Toad, Buzzbait)
7'4" H Tatula Glass G2 (Chatter, Topwater, Lipless)
7' H Avid (Craw Tube, BFE)
6'10" MH Tatula G2 (Swim/Skip Jig)
6'8" Avid M (Spinnerbait, Topwater)
Posted by Basspastor at 4:10 PM 0 comments 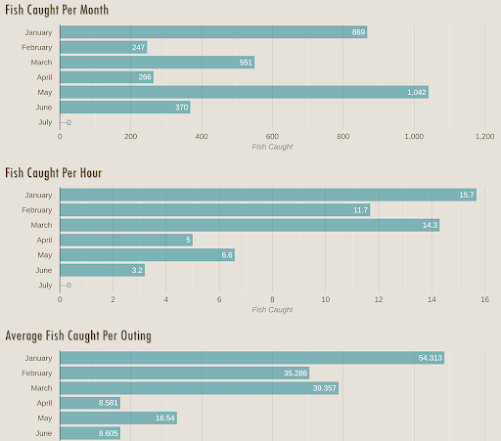 I knew the hot bite in May wasn't going to last. I am pleased to say the fishing in June wasn't a complete train wreck as I feared. Didn't get skunked once, and the golden bullhead fishing was good. My first tournament of the year wasn't good, but I bounced back with an OK finish in the second one, aided by a smaller field. It truly is amazing how differently the weed composition is on Platte/Sullivan from one year to the next. The weed growth should finally fill in for the year in the next week or so. If I am lucky, the fish will group up. Fishing could actually improve in July. That never has happened, but here is hope.
Posted by Basspastor at 12:58 AM 0 comments