I decided not to do my MN Blogger Derby this year.  Andy Nitchals would be running away with it if I did.

Post 2011 Stroke My Fishing Abilities Suffered Worse Than I Realized

As I look at my Bass Snatcher results from 2008 through 2015, there can be no doubt about it.  In my first 4 years in the Club, my finishes improved each year.  Then I had my stroke in late 2011, and the bottom fell out in my finishes, especially after the 2012 season.  The fact that I didn't fish much out of a boat the past 3 years has got to be one factor, but I think a small one.

But I don't feel like my abilities have suffered as much as my results show. I am frustrated by how this year ended, not even getting close to a limit in two consecutive tournaments for the second year.  Last year it happened in the middle of the year, but I snapped out of it posting respectable finishes in the last two.   I definitely have bad taste in my mouth in how the last four tournaments turned out this year that is going to be with me for a long time.
Posted by Basspastor at 5:02 AM 1 comments

Congratulations Guy!!!
Conditions: Mostly sunny, wind out of the ESE 5 to 15mph, temps from the low 40's getting to low 60's.  About 4-5 foot of visibility in some of the bays less in others.

The Day:  We headed up to the North end of the eastern most bay.  It's a slop area where we got bites in pre-fish.  Guy was punching and I was throwing a frog and toad.  Guy missed one or two hits, before we left after about trying for half an hour.  We went to the southern end of the same bay where there is some slop and reeds.  I broke off my Horny Toad when I got hung up on a reed.  I think guy got his first bass and a pike out on the weedline.  I got a pike on a Craw Fatty just before we left to fish some docks.

My Thoughts on the 2015 season:  I didn't get my revenge on any lake, but Farm Island.  It was the second time I missed two tournaments in a year;  The other time was in 2012 with back issues.  Missing the tournament at Woman Lake really sucked.  Missing what would have been a hot, humid, and miserable day on Rush Lake not so much.  It was my worst year for number of fish weighed (16), weight (28.31lbs), and points accumulated (101), which was down 9 places from 2012.  However, I finished 16th out of 41 guys in the Club this year, which was better than 2012 when I finished in 18th Place.

It was a tough year for fishing in the Club as a whole.  For the first time since I've been in the Club we didn't have a single Snatcher go 6 for 36 getting a limit in each tournament.  In the final four tournaments of the year Woman, Rush, Mission, and Cedar more than half the field failed to come in with a limit. Hopefully the poor fishing in the last two thirds of the season is a fluke of the lakes chosen and days fished and not a trend. Participation was down with Cedar Lake being the smallest field I've fished against.

Posted by Basspastor at 1:24 AM 1 comments

Fishing was tough yet again for me on tournament day.

Guy, my boater for this tournament, kicked my butt again;  It's the third year in a row I've drawn him with the same result.  A lot of guys struggled.  I only weighed in 3 bass today, same as the only other tournament I fished on Cedar Lake.  I think I had more weight this time, but I'm not sure.   I also caught two small pike.  Guy got 3rd Place and sealed up club Mr. Bass/Angler of the Year.  I probably had the bites to get a limit, but my Texas rigging skills on a weed line aren't what they used to be.  I had fun, just wish the wind would have been half as strong.
Posted by Basspastor at 10:21 PM 1 comments

Unless I finish in the Top 3 or get Lunker tomorrow the 2015 season will go down as my worst year in the Baxter Bass Snatcher Bass Fishing Club.  Unfortunately I missed two tournaments with health issues.  I don't care where I finish tomorrow.  I just want to get a limit of bass and catch as many fish, not necessarily bass, as I can.  The weather has cooled down this week and we are in a stable pattern, so the fish should be biting unlike two weeks ago when the cold front shut the fish down.  Looks like it's going to be a cold morning, I better find myself some gloves.

We did get out and pre-fish last weekend and we had some success, so I am hopeful for a good day.
Posted by Basspastor at 10:36 PM 1 comments 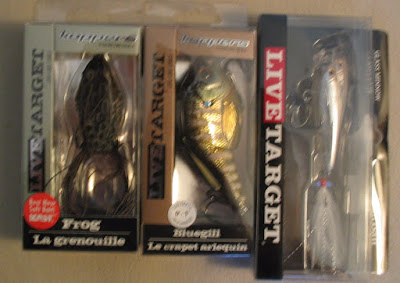 Here are the 3 baits I chose from LiveTarget for being the top team in their group for the final B.A.S.S. event of the year at Sturgeon Bay.  I got the hollow body frog, the wakebait, and Baitball Popper.  I think I had a hit on the wakebait tonight but I didn't hook up
Posted by Basspastor at 8:59 PM 1 comments