PS Pastor Cheesehead I need your email, phone, and address. I've been wanting to get hold of you but nothing I've tried has worked.
Posted by Basspastor at 3:10 PM 0 comments

I took the "Slop Slip" out on Platte from about 4:30 to Dusk on a gorgeous fall night, but the bass were not hitting but the Pike were swirling. I saw stuff including my Sizmic Toad getting whacked at, but those Pike were just trying to scare that Toad; I never did catch a pike and I didn't lose a hook either (a few legs off the Toad's yes, but hooks no thank goodness). I did get one 14/15" bass, I missed another that size when my hookset sent him rolling, and I think I had a shot at a big one that promptly buried me in "the straw and hay."

I then went to Eddies on Mille Lacs to meet the guys coming in on the 6-10PM launch. It was very slow and only Capt. Shrink Wrap caught anything among the guys and gal with FOM. They had 19 people on the launch and only 8 or 9 were caught in the 4 hours. The later launch had better success by the sound of it. The Jetti was a dud, but it sure was nice out and I stayed until after 1AM. Some guys gave me some leaches and I talked to a guy who was out the night before and got into em.

It looked to me like IP was going with a perfect W SW wind and bright moon.

Tonight it looks like Cyb and I will be getting out.
Posted by Basspastor at 2:16 AM 0 comments 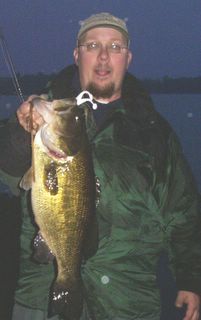 ...Is my biggest bass of the last couple years. She measured in at 21.5 and I would guess was in the high 5's; She hit a Sizmic Toad fairly close to the boat. It is the second biggest I've caught out of Platte. I caught a 21.5"er that was much thicker and probably went mid-6's two years ago.


This bass was one of those fish that fools you. I thought I had a little pike swirling at the frog in a tease. Fortunatly I decided not to pull it away and kept baiting it. I did this for a good 30feet, before it finally sucked it in; all the while I thought it was just a slimer. It was about 10 feet from the boat when it took the frog and I set the hook, all I saw was head and mouth of a big bass. I was using heavy tackle in fairly heavy but dying cover and so I horsed it right to my awaiting hand.

As long as I'm on big fish Here's two I caught on Platte the night after this years September Tournament debacle on Platte/Sullivan: 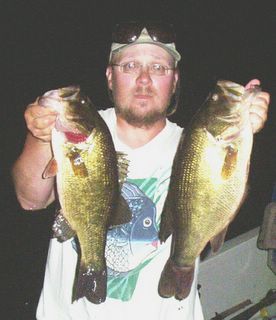 The big fish was only 19.75 but weighted 5lbs4ozs. The smaller fish is a regular sized mid 3lb 18" Larry. I got the big one under a dock that I just hammered to no avail on the previous tournament day; Got her on a SnagProof Bobby's Perfect Frog on one serious swirl. Sometimes you know they are big and sometimes you don't.
Posted by Basspastor at 7:07 PM 0 comments

Update, didn't get there until 10:30. The wind had come up nicely out of the SE, but the clouds were cutting out the 1/2 moon. I only got one that was under 14", one of the few small guys I've ever got off the Jetti.
Posted by Basspastor at 7:59 PM 0 comments

It was a long day out at the "New House" which is actually now after long last on the property. I video taped the thing. Watching a modular home get put on it's foundation is interesting and I am sure my commentary and videography skills made it even more so. My one regret is that I didn't interview "the guys." A little Leno'esk "Dave Walking" would have been cool.

Anyway I headed out at dusk on this perfect mid fall day and slammed 5 topwater bass, but none were pigs. I had several pike blow ups and one was from a huge'n. But it missed the Sizmic Frog. Oh to be out all day on a day like this, the fish were shallow and ultra aggressive; another day that you could pop a state record.
Posted by Basspastor at 7:43 PM 0 comments

There is a new blog that I encourage everyone to visit: Living the Dream by Master Outdoorsman Spike Miller. Spike was my department manager at Gander Mountain in Maple Grove a couple of years ago and is probably the most knowledgeable and versitile fisherman and outdoorsman I've ever met. Spike is also a "natural" comedian and story teller. Well I haven't had time to read the blog, I have little doubt that it will evolve into a classic, if Spike sticks with it.

If he can just translate his story telling prowess, and this guy has stories upon stories, into a written form than we may have the bloggosphere's best writing pioneer on outdoor subjects. PUT THAT BLOG IN YOUR FAORITES AND READ OFTEN.

As for Spike, I will get up to Red this winter to fish those Wall, um I mean Crappies this winter. Expect a phone call sometime soon.
Posted by Basspastor at 12:34 AM 1 comments

I have been busy beating them back in the comments section. Looks like I need to find that Blogger code to stop em and start running the Frachise Empire again.

The Tournament Report is up for the Team Bass Horsehoe Chain of July 9th and I do plan to give reports for the rest of the season as I have time. I also hope to update the Fishing Log Blog some from 2005 as well as Bass Pundit Preach and B.P. vs. Cyberfish. We didn't face off much this summer and our last outing we both got skunked. Before that Cyb shived me at Mille Lacs during the Sept. full moon. He was ON FIRE that nite reeling in the piggies, thanks to my boat control and that Firetiger HJ.

Anyway, soon I should be blogging again on a regular basis.

Coming Soon... a pic of a real Toad I caught in September.

The weather has been unseasonably warm for about 2 weeks and a lake finaly gave up a ghost! (We have had perfect weather for this to happen.)

While the pic makes it look 10plus; the Certified weight will be 8lbs15ozs, which will break the old record by a couple of ounces. Still no 10er for the Mud Ducks! It was caught out of Auburn Lake, a small west metro lake of 261Acres; I'm not sure if it was caught out of the West or East Lake. That lake will probably get pounded by idiots now. I don't think I've ever fished that lake, but I've fished a few that are close by as that there are a good number of sleepers in that vicinity. It is close to Victoria and is just the SW of Lake Minnetonka.

The fish was caught by one of the big guns of MN Bass tournament fishing, Mark Raveling. He got it on a big ole buzzbait. A lure I've had zero success with this year.