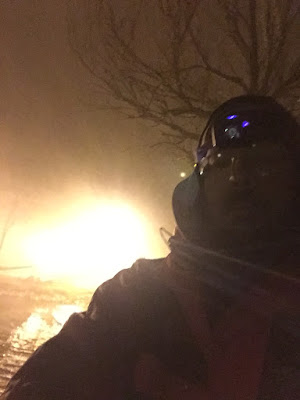 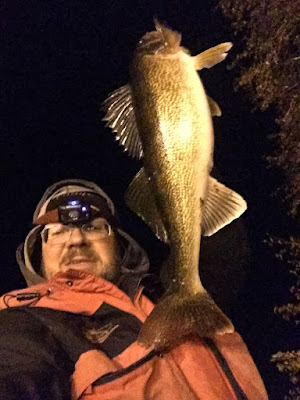 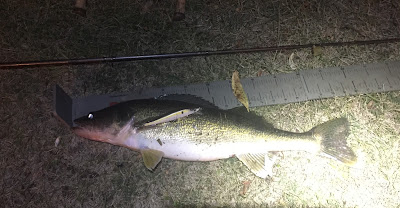 Posted by Basspastor at 4:36 AM 1 comments 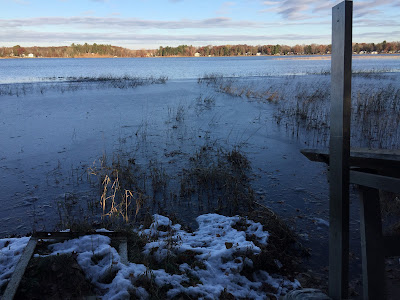 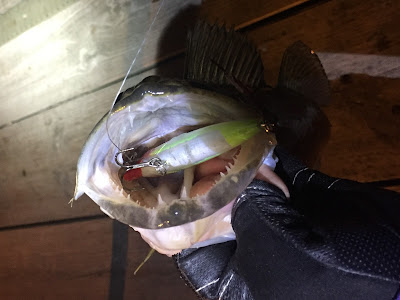 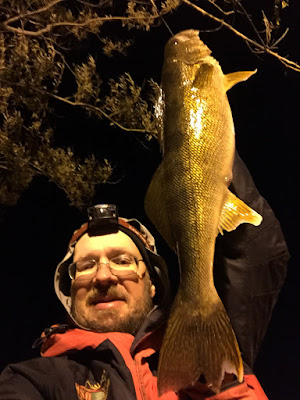 Posted by Basspastor at 4:40 AM 0 comments

To Ice Fish or Not to Ice Fish? That Is the Question. 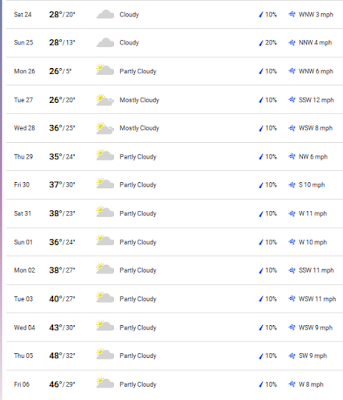 The cold through Tuesday should have Platte Lake locked-up tight with possibly Bulldog and Rock being safe to fish as well.  I'm definitely thinking about getting out on October ice if it's safe. I've already snow blown the driveway, so why not. Not sure that the Expedition will be up to get me out though. Maybe I'll trade cars with Steve.

Thankfully it doesn't look like the Jetty is going to be ice-covered. So hopefully I'll be fishing out there next week after we get out from beneath the freezing temps.
Posted by Basspastor at 3:06 AM 0 comments 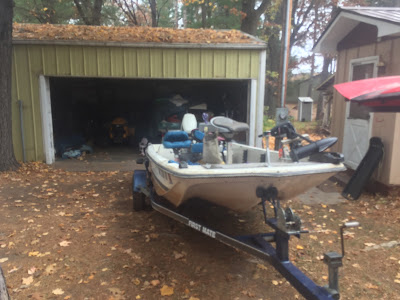 In light of the impending freak snowstorm today, Dad and I pulled the Trophy out of the water this morning.  If the forecast for the weekend holds Platte should be iced up in a week. I dropped my iPhone in the Lake and got a towel stuck in the winch. Other than that it went smoothly.
Posted by Basspastor at 11:53 PM 0 comments 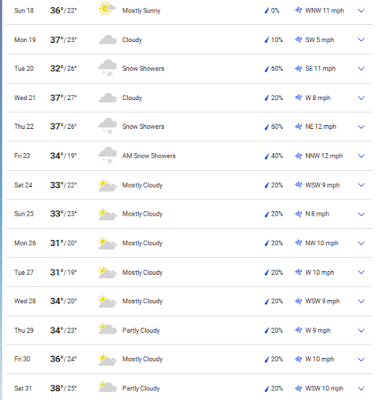 The forecast is getting worse every time I look at it. Taking the Trophy out on Wed's. Not sure if I'll be able to get one final bass trip in or not.Ridiculous!

Posted by Basspastor at 2:50 AM 0 comments

Ten Years Ago Today, The Repo Man Got Lit Up at SPSI 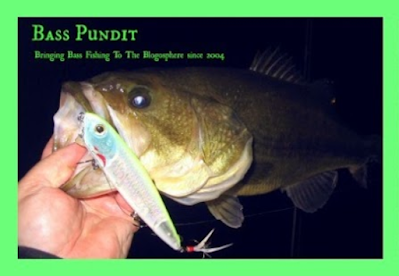 It was a memorable trip. After two straight skunks, I found them and capped it off with a couple of three pounders on top.
Posted by Basspastor at 6:09 PM 0 comments 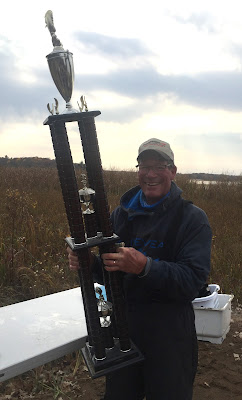 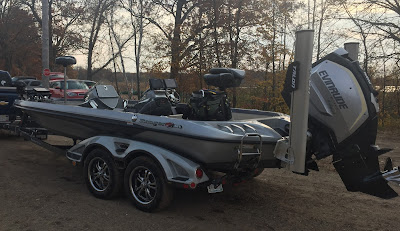 Posted by Basspastor at 4:06 AM 0 comments 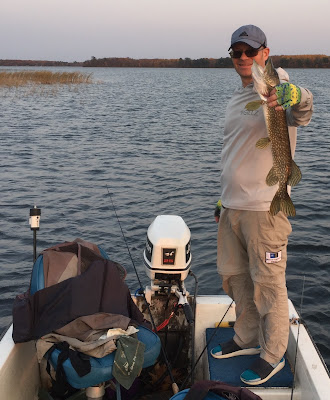 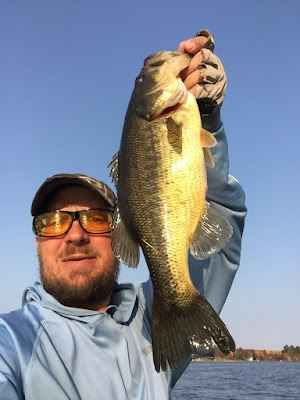 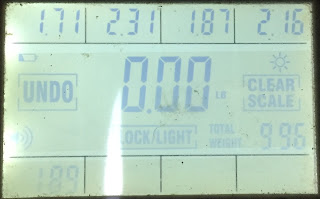 5:00-7:00PM West Point, Loon Sex Point, SPSI, Big Rice PT to AACane, NPBI, F Flat
66-72℉, PC, 4-15mph WNW
53℉ Water Low
Todd and I took the pontoon out of the lake, then went fishing. I don't think I got a bite at West Point, but maybe I caught a bass there on the Jackhammer. I know I got one for sure just past the rice. Then we went to Loon Sex Bay where the wind was more out of the West than I was expecting. Todd got a couple of pike as we worked down the point. Then we headed to SPSI and I got a bass after the Jackhammer got hung up on the bottom. I popped it free and then the bass popped the lure. Todd might have lost a fish or got hung on the buoy. Then we went to Big Rice Point. The wind was blowing pretty good there.  At AA Cane I got a bass and Todd got a pike.  Then we went to NPBI where Todd lost a good bass at the boat.  Then we went to F Flat where I had a couple of strikes on the Whopper Plopper that didn't hook up. I was dumbfounded that fishing wasn't better. I am totally gobsmacked by the fact that this was my last trip in the Trophy for 2020.  I fished tournaments the next two days and fished at Eddy's Jetty waiting for the weather to turn warmer, except it didn't. I pulled the Trophy out of the lake on the morning of Tuesday, October 20th before that day's snowstorm hit. We got about 8-inches in that one and about the same on Thursday the 22nd, followed by several days below freezing. Uff Dah!
Posted by Basspastor at 9:21 AM 0 comments


The inaugural episode of Covering Water was on Mandy Uhrich, a Brainerd Area Fishing Icon. Apparently, they just shot an episode yesterday with Josh Douglas on Mille Lacs Lake.  I thought the initial Episode really set a high bar, excellent production. Really looking forward to more.
Posted by Basspastor at 4:30 AM 0 comments 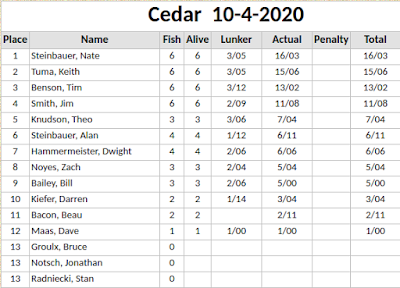 If I never see Cedar Lake again it will be too soon. We started out with a slow-motion start in heavy fog that was lifting by the time we arrived at our starting spot in Sunrise Bay. The fish were inactive.  So we started covering water. I got a couple pike. I think Nate connected with his first fish around 10:30AM in some pads on a swim jig with a Kalin's Mogambo Grub, He missed a bite and then caught one off a dock. We then tried the North end of Sunrise and he missed a couple there. We briefly tried the Slop Hole. That wasn't happening so we quickly left. Just outside of the Slop Hole Nate got a nice keeper and had a couple other good ones boil on his jig. He gave me a Mombo and I got my keeper that was 12.25". We then left Sunrise and worked in the mid-section of the Lake. We were fishing pads with reeds and about to leave when Nate caught a good fish. That bite clued us into a pattern, but we couldn't land out bites and I got a pike.  I did lose a small keeper that hung me up on the pads. We went back to the place in Sunrise where Nate had the boils. I had a feeling one of us was going to get smoked and it was me first. I got too excited and jerked the jig out of the fishes mouth. Nate caught his limit shortly after that. We went back to our starting spot and didn't get anything. Then we went and worked the area across from where I missed the blow-up. I missed a blow-up in the reeds there as well. We went back to where Nate got his first fish and I got a pike. We spent the last 15-minutes by the access. Nate got his biggest fish of the day there and I got another pike. Fricken Cedar Lake.
Results: My fish weighed 1lb and put me in 12th Place. Nate won the tournament with 16/3. Tim Benson caught the 3/12 Lunker and Placed 3rd making him the 2020 Bass Snatcher Mr. Bass. Theo won the final Co-Angler Challenge of the Year out of Tim's boat.
My Thoughts: It was a tough bite and even if I had caught that other bass I had on I don't think it would have moved me up any. Who knows if my other bites were even bass or not. I finished in the Club Super 6, so I do get Wood for this year. I set new personal bests for Total Points, One Out Points, and Average place of finish. I wasn't because I fished that great, I didn't. We just didn't have our full complement of guys this year. 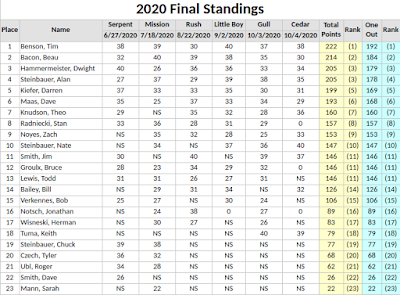 Posted by Basspastor at 5:05 AM 0 comments 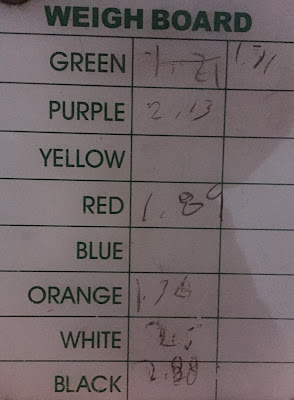 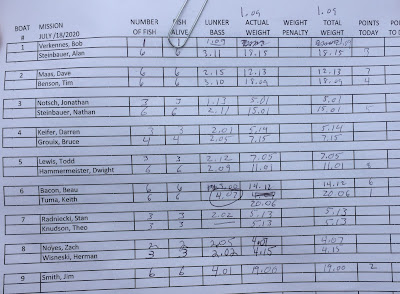 Oopsie: As I started North on 25 toward Brainerd I remembered I didn't put my cull tags in my bag.

The Day: Everbody was there early in the belief that there wouldn't be parking spaces due to a big walleye tournament, but that wasn't the case. I was the last guy to arrive. I got my stuff in the boat and Tim had four extra cull tags. We blasted off a little before 7:30AM and we headed right to the reeds on the West side of  Round Lake. It wasn't long and I flipped up my big bass of the day 2/15 on a Texas Rigged junebug craw tube.  Tim got 2 or 3 keepers on our first pass along the outside edge in maybe a 60-yard stretch. We then worked our way back inside the reeds but not too far from the edge. I missed a bite on a Hack Attack Jig and caught a pike around the same area where I got my bass. As we started back on a second pass Tim got a nice one. I think he was culling by the time I got another bass. I did lose a fish that broke me off. Tim threw a chatter jig to a small reed island and had a good one jump all over it. I cast my craw tube to the area and was immediately hit by my second biggest bass of the day. We thought maybe we found a school, but nope. So after checking the area out resumed fishing down the reed line. Not too far down Tim got another good one on the chatterjig. I caught a 12.5" just outside of the reed line on a Hack Attack Jig. Then I got on the reed line on a tilapia craw tube. The sun had come out prompting me to go to a lighter color. I got my fifth fish on a D & M Baits junebug Piranha 2 Swim Jig (chatter). I got my limit fish around noon on the craw tube. We then worked our way back with me missing or losing several bites.

We then tried a small reed bed and Tim got a couple of upgrades. At that point, we decided to leave Round. We went to reed bed on the North end of Gull. I got one upgrade on a junebug craw tube and caught a dink on a LiveTarget Baitball Popper. It wasn't happening. We spent the final hour and a half on the South end not catching anything.

The Results: My fish weighed 12/13oz putting me in 7th Place. Tim had 18/9 putting him in 4th. Keith Tuma won with 20/6 and got Lunker with a 4/7 fish  Second went to Smitty with 19even and Al Steinbauer got third edging Benson by 6ozs. The Co-Angler Challenge was won by Beau again.

My Thoughts: I am satisfied with my day. It took me a couple hours to relax and get comfortable and in tune with pitching the reeds. We were the only boat in Round and because of that fact we probably should have stayed there the whole day.

This Tournament guaranteed I will finish 5th or 6th in AOY.

Posted by Basspastor at 2:15 AM 0 comments

Gull Plan: Hopefully, I won't freeze my butt off and the bass bite in Round Lake in the morning. Apparently, that lake is notorious for shutting down by about 10AM.  It would be great if the day breaks that tendency. Runs are gonna be cold. Whatever we do after that is a bit of mystery to me. Thank goodness winds are supposed to be light booth days this week.

Cedar Lake:  Try to figure out a pattern and if we can't hopefully I can junk fish up a limit. I have failed to get a limit both times the Snatchers have fished here.

The goal is to get a limit both days and be the top Co-Angler at least one of the days.