I've only been on Lake Alexander twice in my life.   One day fun fishing in the Fall and a Snatcher Tournament in early June 2014.  My boater Club President Tim Benson said he caught them doing everything he tried when he pre-fished, but that was a week and a half ago.  I've never fished with Tim before so I'm looking forward to it.  If I'm really lucky the big Alexander smallmouth will be on topwater.   It's going to be a hot one tomorrow

Posted by Basspastor at 8:00 PM 0 comments

The Day:
Neither of us pre-fished so we went in basically blind hoping Alan's experience on the Chain would carry the day.  We got off to a pretty good start running across Whitefish up into Loon Lake.  My first bass of the day was a line burner caught on a 105 size Shower Blows.  The only topwater bite I got all day, but wind and weeds forced that hand.  I was surprised by the amount of weed growth in a number of areas we fished.  At the end of the first hour my boater Alan was culling as he got into a spinnerbait bite in the wind.  I managed to pull a 1.75lber off a dock on a 5" Yum Dinger while that was going on.

We moved up to the North shore out of the wind.  I caught a 13-incher on the Dinger casting towards some pads.  Alan spotted some beds and we drifted over a fish that was still there and Al caught it.  It was Al's biggest of the day (3/10) and only smallmouth.  I didn't catch any smallies.  I caught my biggest one of the day (2.50) shortly after Al blind casting the Dinger.  We continued fishing docks and pads until I got my limit and culled once which happened by 9:30AM when we left Loon on our way to Cross Lake.  One of the fish I caught had a Senko and hook stuck in its gullet.  I pulled the Senko out and the darn thing went belly up soon after.

Al decided to give Hidden Lake a quick look and he got three quick small upgrades.  I missed my bites and Al started losing fish as well.  After that, we hit some spots in Cross that yielded only little fish or nothing.  So we then went to Clamshell.  I think Al got one cull there.  I lost a couple of bites that felt like good fish.  We tried Bertha for a little bit getting nothing then headed to Hay to finish the day.  I missed a good fish and got a small upgrade on the bubblegum Super Fluke fishing docks.

I thought I had done OK, but boy was I wrong.

Results:
My limit weighed 11/13 minus 2oz penalty so 11/11 was my official weight which put me in 17th Place out of 20 anglers.  Alan was only 2 places better with 12/11.  The winner was Chuck Fields setting a new all-time record bag for the Bass snatchers at 23lbs.  Tuma tied the previous all-time record with 22-10 getting 2nd Place. The winner of the Co-Angler Challenge was Beau Bacon with 17/4 out of Tuma's boat.

My Thoughts: Not being able to pre-fish this one relegated us to the back of the pack.  We were the only boat without at least a 13lb limit and you had to have 15/8 to crack the top 10.  Neither I or Al anticipated that.  On to Lake Alex. 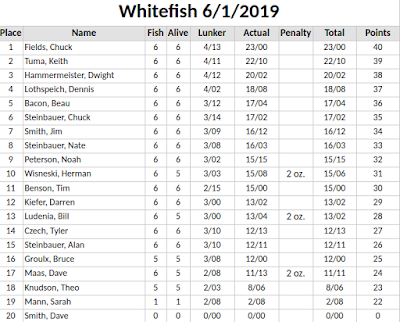 Posted by Basspastor at 3:26 AM 0 comments

The guys crushed 'em today at Whitefish Chain and Chuck Fields set the All-Time Snatcher Best Bag of Fish with 23-0. Keith Tuma apparently tied the old record with 22-10; At least that is what I thought I heard his weight was. I didn't quite catch my 12lb goal do to some poor execution. I think I landed in the bottom quarter of the field. My boater Alan Steinbauer faired a bit better than me but also had missed opportunities plague him. We had a good time so it's all good.
Posted by Basspastor at 11:56 PM 0 comments