FYI- FLW Fantasy Fishing Is Up And Running 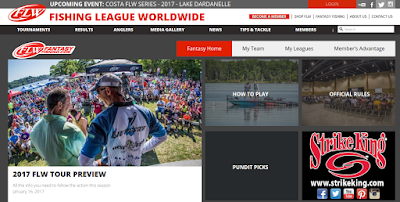 First tournament of the year starts next week on Thursday at Lake Guntersville.  I'm meh on the changes on the website.  Some things I like, some not so much.  I do like the fact that we only have to pick 8 anglers with the same $200 system with anglers priced around the same as last year.  A lot more flexibility in picking rosters now with two less anglers to pick.

FLW Fantasy
Posted by Basspastor at 8:10 AM 0 comments

9:00AM-1:30PM Rock Lake My Spot 14'-17'
Conditions: 34 degrees, Cloudy and fog in the morning, light W wind, sloppy and wet on the ice
With the warm weather we have been having my motivation meter finally started ticking up and so today was the day I put it all together and got out.  There wasn't much going on at Rock Lake and two parties pulled their permanents off of the lake today.  I'm taking that to mean the bite hasn't been very good out there this winter compared to other area lakes.

I had a thought before I started drilling holes that since I didn't have any minnows all I needed was a single hole instead of my usual double.  I found one open hole in the area but that was it.  I didn't really look to hard to see if there were any others.  I think I drilled 6.  I started in the farthest North.  And my first fish for 2017 was a...
All I got in the first hole was sunfish and they were finicky.  My line on the VMC Fly's rod was getting caught on the spool where I tied to the backing.  I took the time to get the not put at the very bottom of the spool where it is less likely to catch.  Turns out that was a good thing I did that.

In the second hole I busted the bass first thing after not getting a hit with fish down it on the Rippin' Rap.

The way the bass ran I thought I had a decent sized pike on.  I was pleasantly surprised it was a bass seeing as how I didn't catch a single one out there last winter.  That fish made my trip.

I also caught some perch.
This was the only bite I had on the Rippin Rap.

I was satisfied I knocked the rust off and packed up at 1:30PM.  I should have moved around more quickly and drilled a few more holes. 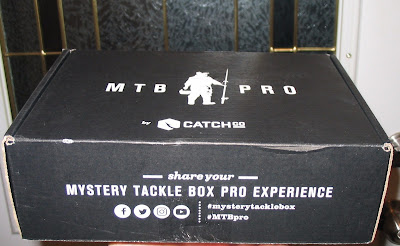 The box actually arrived about 3 weeks back and I just haven't felt like blogging about it until now.  Here is a list of the things that was in it. 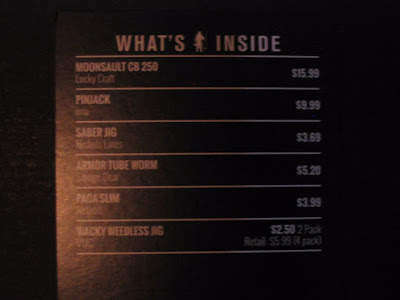 The Lucky Craft Moonsault: It's supposed to be a lipped bait that performs a lot like a lipless one.  I guess I'll see how well that works out.  I see they are on sale right now at Cabela's for $6.99 where they retail for $16.99.

The Ima Pinjack: Another 6-8' running crankbait that is supposed to come through weeds fairly well.  The trick with this on is to back off rather than ripping the lure when you hit a weed.

Nichols Saber Swim Jig:  It's a swim jig with gimmick for locking plastics in place with a toothpick.

Netbait Paca Slim: Sort of similar to a Chigger Craw

Savage Gear Armor Tube Worm:  Has a nylon mesh that is supposed to make the bait last a lot longer than your average Senko.

VMC Wacky Weedless Jig:  It is what it is.  I've never used a wacky jig before. 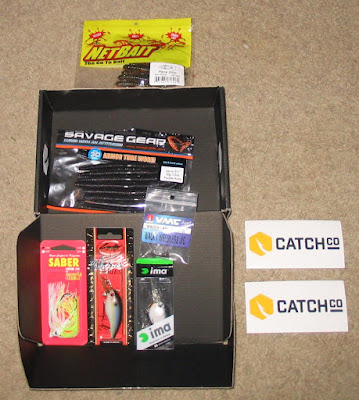 I believe I should be able to catch fish on 100% of the lures that came in this box this year provided I think to put them on.

I can't say I am blown away by the value in this box do to the Moonsault being a lure I can get new for more than 50% off retail and the fact that they only gave me two of the VMC jigs. 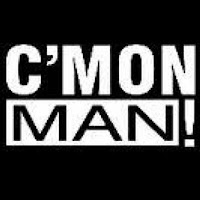 I don't see anything in here being something I would buy for myself with the exception of the wacky jigs.  But who knows maybe something will jump out at me and prove itself to me.  I'll keep an open mind.

Right now I grade this box out as a C-.

Hopefully I'll be more impressed with the next one.
Posted by Basspastor at 4:26 AM 0 comments 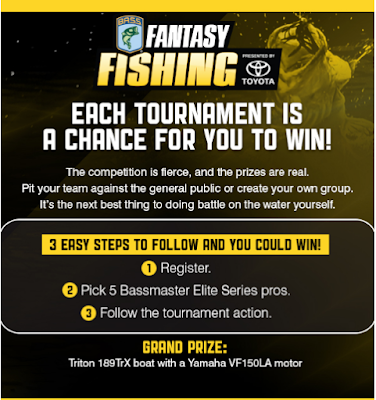 Sign up here, but the first tournament is a month away.  If you like to play fantasy sports I recommend you give it a try.  You don't have to know much about fishing to be successful.  Pretty much any angler can do well in a given tournament or bomb for that matter.  Last year I pretty much sucked at picking my teams most of the time.  (David Walker, I'm looking at you.)
Posted by Basspastor at 1:32 AM 0 comments

Baxter Bass Snatcher History Made in 2017

For the 1st time in the 41 year history of the club we will have a female member.  I wasn't at the December meeting when it was discussed.  Since it was decided to accept her in December nothing was said about it at the January meeting and she wasn't at the meeting (at least I don't think she was.)  I only learned about it because they sent out a list of paid members and there was a Sarah on it as a new member.

So while we won't have female President in 2017, that doesn't mean there wasn't any great leap forwards for the progress of women this year.  Welcome to the club Sarah!
Posted by Basspastor at 9:08 AM 0 comments

I Am All For Panfish Protection

I am all for whatever it takes to increase panfish size in this state.
Posted by Basspastor at 2:05 AM 0 comments

It was good year for Walter and me with 42 fish caught. 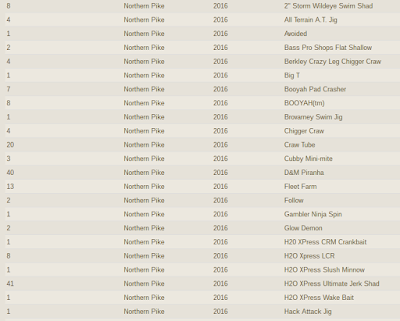 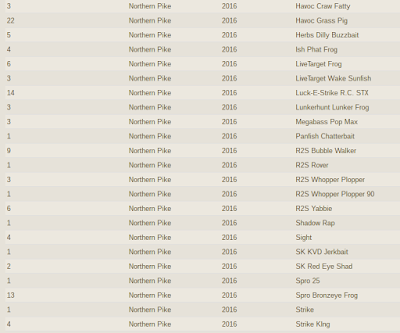 It was a banner year for me on the hammer handle factory that is Platte/Sullivan with 488 pike considered caught by me.  I am especially lenient in what I consider a caught pike because I don't want them stealing my lures. Just seeing one come after a lure is enough for me to count it.
Posted by Basspastor at 1:04 AM 0 comments

Email ThisBlogThis!Share to TwitterShare to FacebookShare to Pinterest
Labels: Pike, Walleye, What I Caught Fish On 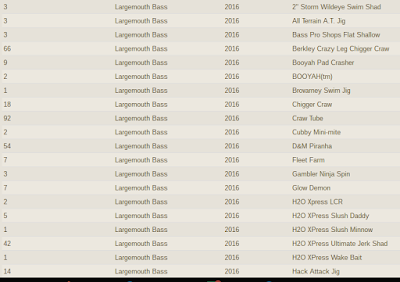 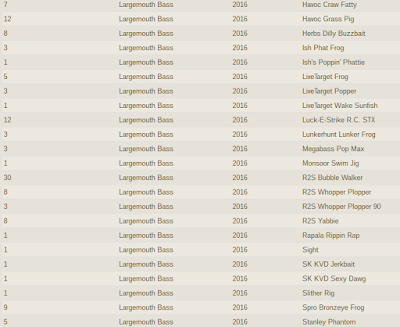 I caught a total 764 largemouth in 2016.  My catch rates for them this year were nothing to write home about yet again.  The most I caught in a single day was a pretty pathetic 16 fish.  Even when I was on 'em I wasn't really on them to good in 2016.  I'm setting an ambitious goal for catching a thousand largies in 2017.

Smallmouth at Eddy's Jetty has always been a hit and miss proposition.  This year I got a few hits which is always good.
Posted by Basspastor at 2:17 AM 0 comments

Email ThisBlogThis!Share to TwitterShare to FacebookShare to Pinterest
Labels: Largies, Smallies, What I Caught Fish On

2016 Fishing Goals Achieved (And Not)

Bass Snatcher Goals:
1.  Get "Wood" in at least one tournament. (1st-3rd Place Finish or Lunker) Nope! 12th Place was my best finish. Ugh!
2. Win my 1st tournament.  Not even close!
3. Get "Lunker" in a tournament. 3.13lbs was as big as I could muster.
4. Get paired with Chuck Fields. (He usually only fishes a couple of tournaments a year so chances of it ever happening are not very good.) Nope, All repeat partners for me this year.
5. Finish in the Top 10 at the end of the year.  (Something I haven't done since 2011) 12th Place.  Finished behind two guys that spotted me a whole tournament worth of points.
6. Catch a limit at every tournament of the year. Didn't get limit in 4 out of 6 of the tournaments that is a personal worst.