As A Life Long Vikings Fan, I say AMEN! 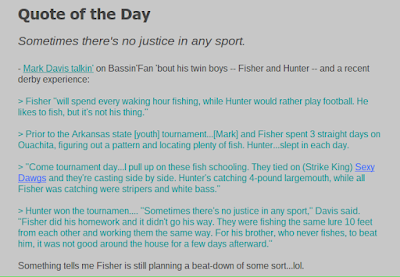 I would say it's pretty rare in tournament fishing where the person who wins doesn't really deserve to, but pretty much every tournament there are guys that deserve to be in the money that don't make it.
Posted by Basspastor at 7:35 PM 0 comments

Power Pole for the Poor Man 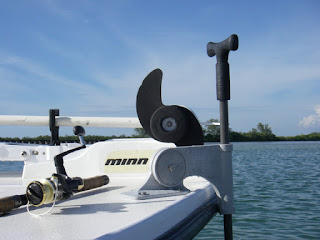 Want to have a shallow water anchor but don't have $1000 to spend.   I think the Stick It Anchor Pin is what your looking for.  I believe one can be had for sub $200.  Of coarse, if your really strapped for cash you can always use a mushroom anchor and a rope like I do.  I'm going to seriously consider buying one of these for the Trophy next year.  If I ever get the Trophy out on the water again.

If you don't understand what having an anchor means for boat control you should really get with the program.
Posted by Basspastor at 3:25 AM 2 comments

Missing The Woman, What A Dissappointment

One week ago was the Bass Snatcher Tournament on Woman Lake.  I dropped out because I was sick with a bacterial infection.  I would not have been able to fish had it been this weekend either.  I finally felt well enough that I did get out for about 45 minutes last night.  But full tournament day in this heat sounds like a terrible idea to me right now.

Missing the tournament was such a disappointment because my boater Dave Branum elected to fish slop all day just like Roger and I did at Farm Island.  Dave fishing by himself brought in 16lbs 2ozs with a 4lb 1oz kicker which put him in 5th Place.  Apparently he had a 13" that he couldn't get rid of that kept him out of the top 3.  I was so primed to fish a slop tournament with all the hollow body frog fishing I've done this year.  And knowing the way things went during our two days pre-fishing I would have had a shot at a good bag as well.

What a missed opportunity!
What a disappointment!
Posted by Basspastor at 2:55 AM 0 comments

My Day at Woman (Pre-fishing with Dave Branum)

And
I did have a large smallmouth follow late in the day.  I've got a plan to turn followers into biters come tournament day.
Posted by Basspastor at 11:33 PM 0 comments

The Difficulty Of Becoming A Pro Angler From My Perspective 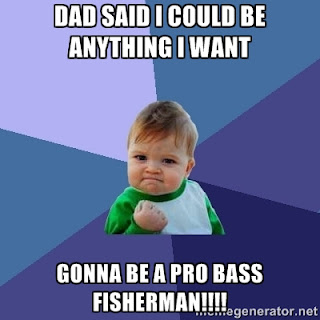 Over at AdvancedAngler.com they just did an article with Boyd Duckett giving people advice if they want to become a Professional Angler.  It contains some sound advice.  If you are planning to take a shot at becoming a Professional Bass Fisherman/woman you definitely should grab on to all the sound advice you can get.  I don't mean to rain on anybodies parade, but the difficulty as I see it is even if one takes and follows all the sound advice out there is they still don't stand much of a chance of really making it as a "Pro Bass Angler" in the long haul.  That is the reality of the situation as I see it.

God Bless and good luck to all of you that are out trying or have aspirations of making it.  I hope you prove me wrong.  Inevitably some people will succeed.

Sincerely
Bass Pundit
Posted by Basspastor at 4:42 AM 0 comments