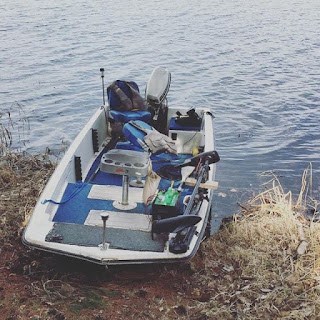 So I headed to the lake place at about 1:30PM. Getting the prop put back on and the trolling motor mounted went smoothly. The bow light still didn't work, and I realized getting the new bilge pump connected would require me to get that stuck wingnut off the terminal. I called dad and told him to bring some WD . Dad didn't find any WD40 but brought some lubricant that Pete brought up last fall. He suggested I spray the lubricant in the light receptacle. I'll be darned that work. I made a little headway on the wingnut, but it was extremely slow. Meanwhile, the CO detectors were going off in the lake place which Dad had opened. I propped the porch door open and found a pipe wrench in the basement. The pipe wrench allowed Dad and I to get enough leverage to get the wingnut off. I ran to Bear Trax to get a different wingnut and some minnows. I think we headed to the Platte Lake Access at around a quarter to six. The motor started right up and I was off. Victory Achieved!
Posted by Basspastor at 11:29 PM 0 comments 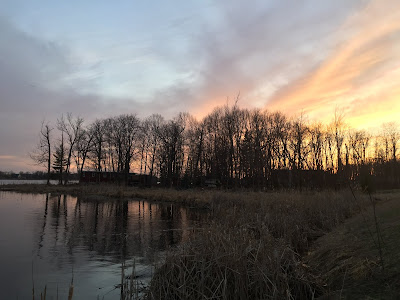 Went to Brainerd with Dad in the afternoon.  Picked up some Rippin' Raps, Rocket Bobbers, and Tackle Trays at Fleet Farm.  At 4:30PM, I went to the lake place to get the new bilge pump connected and get the trolling motor post redone.  Had some thunder boomers going off. That was a surprise.

It sprinkled as I got to Rock and the Rock Dock is in.  There was no activity.  I then went to Bulldog.  I could see activity to the South again tonight, but nothing was going on, and I quickly left.  I was pleasantly surprised no one was at the GOMH.  I got the 17.75" jumper immediately on the Cubby.  I thought maybe the fish were in, but they weren't.  I got one more jumper, one toothy, and got bit off once.  At dusk, the shiners showed up everywhere.  I did have a golden on that I brought to the surface while fishing off the bridge.  No silver bites tonight.  Not surprised because I didn't have minnows.  Bear Trax is supposed to get minnows tomorrow.
Posted by Basspastor at 3:05 AM 0 comments

Got the Trophy Out Today 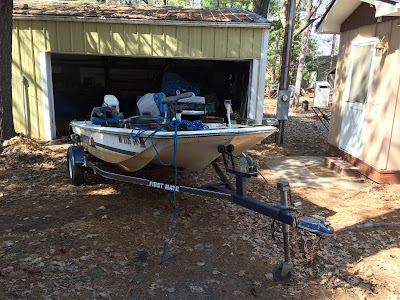 Dad didn't want to get up so I headed up to the lake place on my own.  The first job was to move the lawn tractor.  I couldn't get it started, so I called Dad and he came up.  While I was waiting for him to get there I tested out the new auto-bilge pump. Dad got the tractor started.  I didn't push the throttle up high enough to get it in the choke position.  We pushed it out of the garage.  I got it vacuumed out.  At first, it wasn't sucking very hard.  I took off the hose and it was filled up with sand.  Once I got it cleared it worked a whole lot better.  I couldn't get the bow light to work.  I've still got to switch out the bilges and get some other things done.  Hope to have it in the water by Friday at the latest.
Posted by Basspastor at 11:54 PM 0 comments 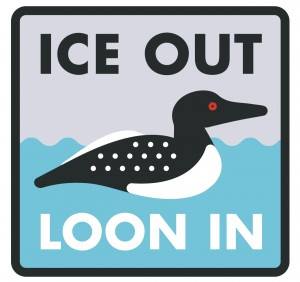 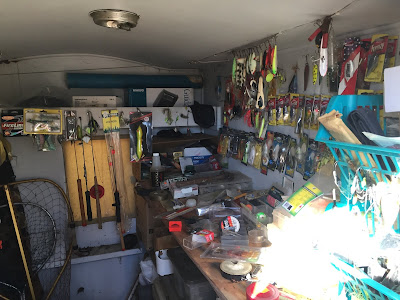 It was so nice out today (68℉) I went down and opened up the Tackle Warehouse for the first time this year.  It's definitely on the late end for a TWO thanks to the snow, but not the latest either. 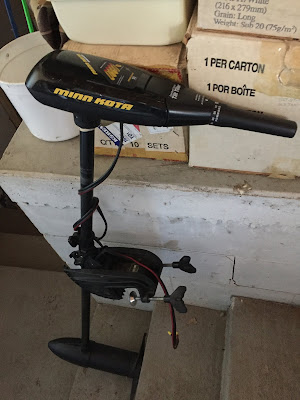 Earlier this month I also achieved the getting the Trolling Motor fixed goal.  It's got a brand new head thanks to them having one just laying around.  I should work at low speeds now.  Hooray!

The lakes should be open by the weekend (4 more days).


Lipless cranks are a lure that I had pretty good success with occasionally before I moved North in 2003.  For whatever reason, I haven't been on a good trap bite in years.  I've caught a fish here and there on them or nothing, definitely no memorable whackfests.  I've got the right equipment and dozens of lures. Maybe 2019 will be the year.

The Tactical Bassin video brought the subject to mind. (Hmmm for some reason the video embed code flat out disappeared.
Posted by Basspastor at 12:32 AM 0 comments

Rock. Sullivan Inlet, and GOMH Tonight and Hitting A Snag 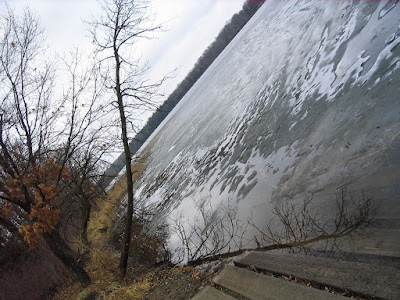 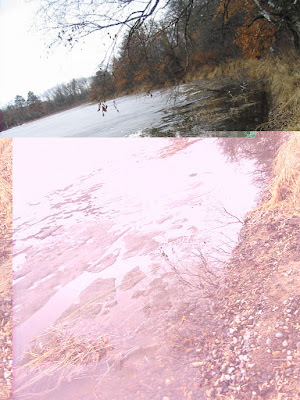 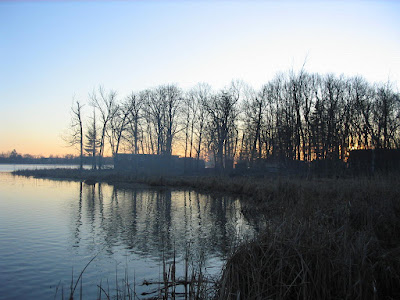 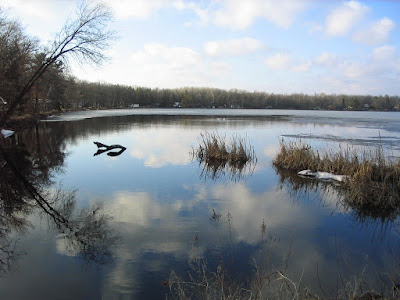 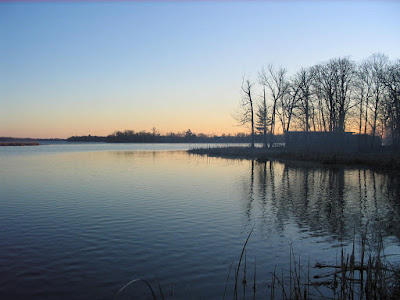 It looks like ice out is going to be delayed for a few days thanks to it getting cold with snow this week.  I think ice off will now not be until the 18th, 19th, or 20th.  Hopefully, we won't get a bunch of snow.🤞.  My guess is that most of the lakes in the Twin Cities will be ice-free before the cold weather hits.
Posted by Basspastor at 11:28 PM 0 comments 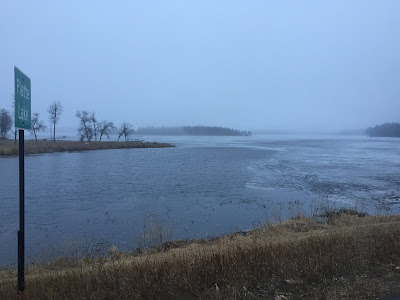 I stayed to watch Auburn go down to Virginia at the Final Four then headed out expecting to get another skunk, but that was not to be.  I started on the SW side and didn't get anything.  I switched to the NE side.  Sure enough, a bullhead pulled my bobber under and I landed my first fish of 2019.

The weather was once again running at least 5 degrees below the forecast.  It was foggy as well.  The one positive is that it didn't get under 40-degrees last night.  Maybe it will be warmer tomorrow.
Posted by Basspastor at 9:45 PM 0 comments

The weather made for an abbreviated ice fishing season for me this year.  Once the Snow and cold hit in early January I was done.

Any Day Now A Bullhead Should Show Up 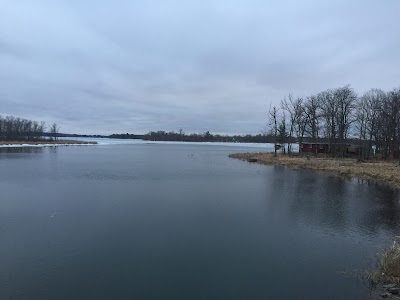 I am a little disappointed with the pace of ice disappearing at the GOMH so far this week.  It has generally been a few degrees under what was forecasted to happen.  Later today it is supposed to get near 60 degrees and it's supposed to be above average for the next 4 days after that.  Bullheads could move in at any time.  Odds are it won't be until Tuesday or Wednesday of next week at the earliest, but the GOMH has been known to pleasantly surprise me from time to time.

Update: Looks like it's only going to get to the mid 50's today if we are lucky. Drats
Posted by Basspastor at 1:04 AM 0 comments

Relaxing Night at the GOMH

A gloomy night cool night, but I was into it.  Casting out and listening to my 2019 Playlist.  Very relaxing. It's supposed to warm up tomorrow.
Posted by Basspastor at 9:06 PM 0 comments 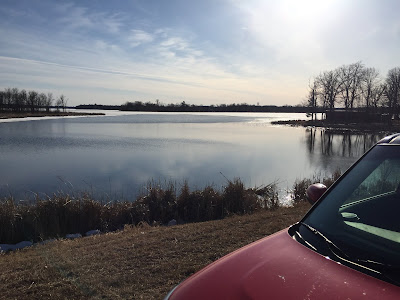 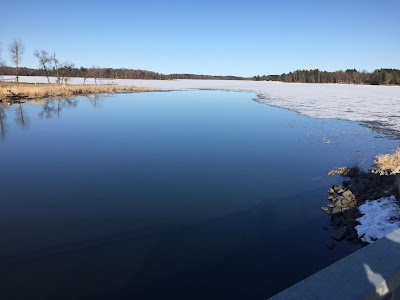 Dang light snow we got this morning didn't melt off the lakes today keeping the surface white so instead of absorbing heat under the ice we got practically nothing out of this sunny day.  No activity detected.  A couple guys briefly fished the NE side as well.
Posted by Basspastor at 8:48 PM 0 comments

I believe that over the next week, I'm going to witness quite a bit of progress towards ice getting off the lakes.  Today was a bit of a disappointment in that regard because it only got to about 40 degrees due to the thick cloud cover.  I didn't get a hit at the GOMH, and the water has clouded up quite a bit.  It's still rising.  I also went to Bulldog and the Sullivan Inlet. 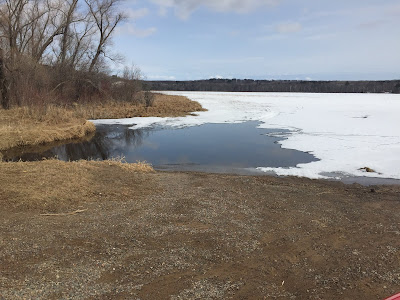 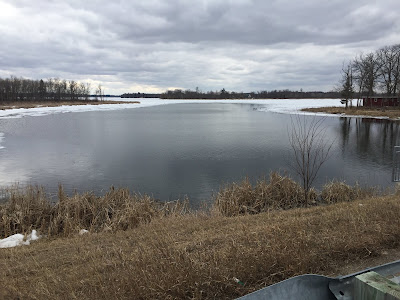 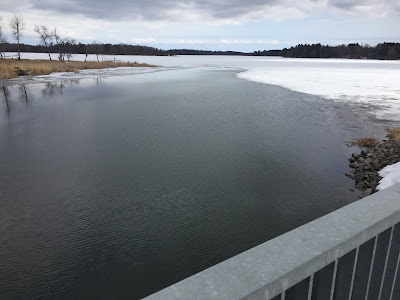 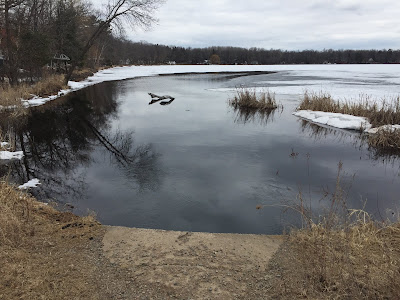 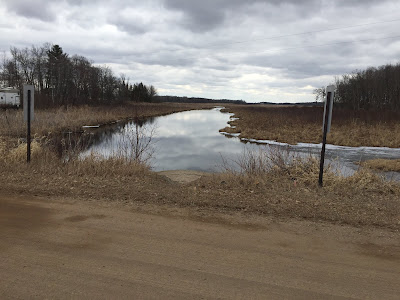 Posted by Basspastor at 7:35 PM 0 comments