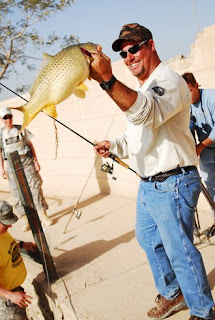 Professional anglers Sondra Rankin, Eric Maninno and Joe Mercurio were on hand to host the event. Rankin is a country music singer as well as the star in her own TV series, “Turn up the Bass.” Maninno hosts his own show as well as being co-host of Operation Catch Fish with Mercurio.

Servicemembers enjoyed a few hours off from their normal work to enjoy a fun and relaxing day of fishing. “It is nice to get out of the office and relax,” said Master Sgt. Betty Rupp, who won second place in the female division with a catch of 3 lb., 15 oz.

Gifts were handed out to all the participants while the top winners received special prizes like fishing reels and watches. Jason Sparkman, the first place male winner, won a TV for his fish weighing in at more than 13 lbs.

Taking first place in the woman’s division was Pfc. Ariadna Lee, with a catch weighing in at nearly five lbs. She was awarded a watch and a bag full of various fishing lures and hooks.

“I love it [Operation Catch Fish],” Rankin said. “We are giving the troops an opportunity to get a day off and win a few prizes.”

Hmmm I didn't even notice that Sondra Rankin wasn't at Table Rock. FYI-Rankin is an FLW Tour Co-Angler.

I wonder if the National Guard Team with FLW has ever done something like this?

Another Picture that caught my eye: 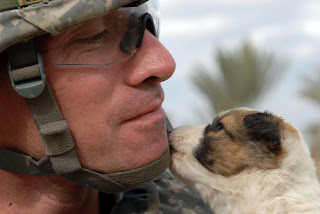 Is KVD blogging???
It sort of looks like he was blogging, but things seemed to have stopped with the Classic. WOW there is some good stuff here, check it out!!!

OK I found it now, this "Van Dam's World" blogging is being done at Bass Insider which is a pay service. I am guessing that after a certain length of time, the blogs are being released to his website and that is why it appears things stopped at the Classic.
Posted by Basspastor at 2:06 AM