Yes, I have known about this for some time, but the official announcement was made today 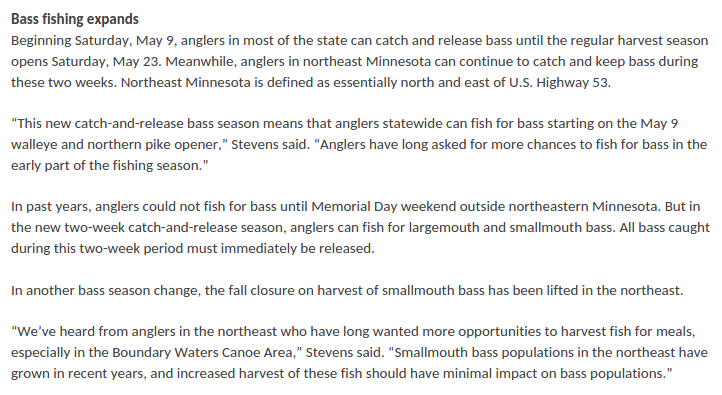 Posted by Basspastor at 4:17 PM 0 comments

So my year of revenge it is.

The only changes we made were to switch the Mission and Cedar lake tournament dates.  I really hope I get a boater who will take me with to pre-fish Woman and Rush Lakes.
Posted by Basspastor at 3:58 PM 0 comments

I still believe the best coverage they have ever done at a Classic was the interviews when the guys got off the water last year with this years live coverage being a close second. I thought the live coverage on Saturday was a bit of a dud after the great stuff they got live on Friday with the late start. The live coverage picked up steam again today with more fish being caught and the drama of it being the last day.  I thought the highlight of today's live coverage was Randy Howell missing that fish at the bridge.   Hopefully this is the last Classic where they don't offer live on the water coverage from start to finish.  Their decision to leave the best times of the day for catching fish out of the coverage is baffling to me.  If they thought it would build drama,  I suppose it did a little bit, but once Casey's weight was on the scale all the drama was gone.   Personally I watched the Major League Fishing re-run instead of paying attention to most of the weigh in.

I was really impressed with Powroznik in the post tournament interviews.

Casey Ashley is definitely a heck of a fisherman, especially on those blueback herring lakes.  Him winning kept my Fanatsy Team from being super mediocre.   I should have kept Wheeler.  Oh well.
Posted by Basspastor at 11:43 PM 0 comments 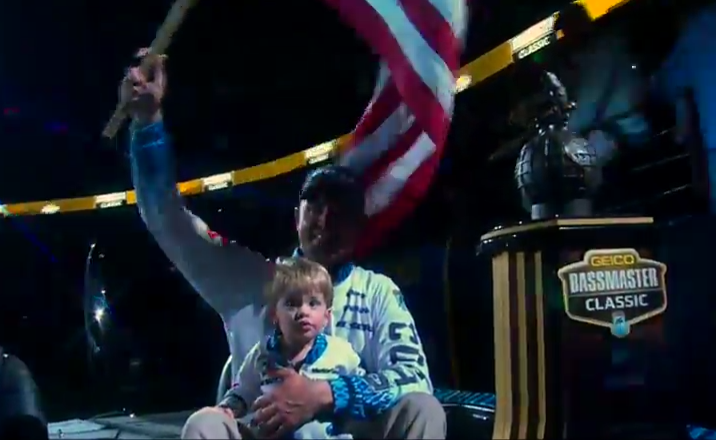 Posted by Basspastor at 5:29 PM 0 comments

The novelty of the live coverage for me wore off.  Why are they not going live first thing in the morning and the last two hours when the fishing is supposed to be the best?  I don't get it.

Thanks to my Bass Snatchers meeting and shopping in Brainerd I ended up missing the weigh in.  My money is on Casey Ashley to pull it out today.
Posted by Basspastor at 4:37 AM 0 comments

The Good:  David Walker getting a award for helping save a father of 4 kids life.

My switching out Morizo for Brett Hite.  Thank You Rich Lindgren.

The Bad:  BASS discontinuing the interviews as they come off the water that they did last year and ending the live on the water feeds 2-hours before the tournament day is over.  Also the on the water blog coverage didn't seem as good or comprehensive as last year.  The good live action that they were able to get really saved BASS's bacon.

I think they need to tell Mercer, Zona, and Sanders to resist the urge to be constant play by play announcers.  A lot of the time I felt less of them and more from the anglers on the water would have been better.  Zona and Mercer were definitely better at letting less be more than was Mercer.

Posted by Basspastor at 2:47 PM 0 comments

My Bassmaster Classic Fantasy Line Up 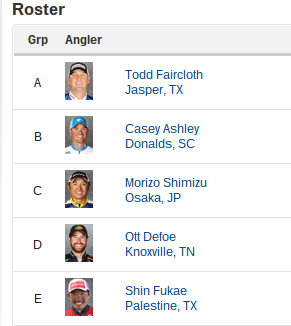 I decided to pull the cocky kid Wheeler for Shin in Bucket E.  I didn't go with Andy Young because a rookie Pro just isn't a good bet in a tournament this big.  We do wish Andy the best however.

Update: Last minute substitute of Morizo out for B. Hite.  Rich Lindgren over at the Fantasy Fishing Insider Podcast had solid reasons to go with Hite.  My pick of Morizo was just a gut feeling with nothing to back it up.

So here is my final roster. 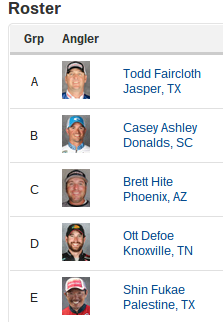 Why Close The Pike Season in MN North-Central Region?

An additional thought I had with the proposed changed to Northern Pike regulations in MN.  If the goal is harvesting more small pike, which clearly is the case in the north-central region, than why should pike season be closed in North-Central Region?

Wishful thinking on my part?  It wasn't even an option they considered.
Posted by Basspastor at 1:52 AM 0 comments

The MN DNR's proposal for our lakes in the north-central zone:

The DNR’s proposal would eliminate the statewide northern bag limit of three fish, with one over 30 inches, and replace it with regulations that would differ depending on three new northern pike management zones: south, north-central and northeast. The biggest changes would occur in the north-central region — roughly north of Hwy. 55 and west of Hwy. 53 — where most of the lakes with an overabundance of small northerns are located.
There, the northern bag limit would be 10 fish under 22 inches, with two over 26 inches allowed in the 10-fish bag. All northerns 22 to 26 inches would have to be released
I am all for it making the 10 fish limit, but think the protected slot should go from 23 to 28 inches and be only one 1 fish allowed above that.

Platte/Sullivan had liberalized limits with some kind of protected slot for northern pike when we first bought a cabin on these lakes .  I believe the change started working slowly, but then they switched back to normal state regulations about 10 years ago and the lakes are now reverting back to a hammer handle factories.  I firmly believe we need to protect the bigger pike and cull out more of the smaller one's on many of the north-central lakes.

Full Star-Trib Article on the proposed changes
MN DNR's PDF on the issue.
Posted by Basspastor at 9:10 AM 0 comments

2015 FLW FantasyFishing.com Is Open For Business 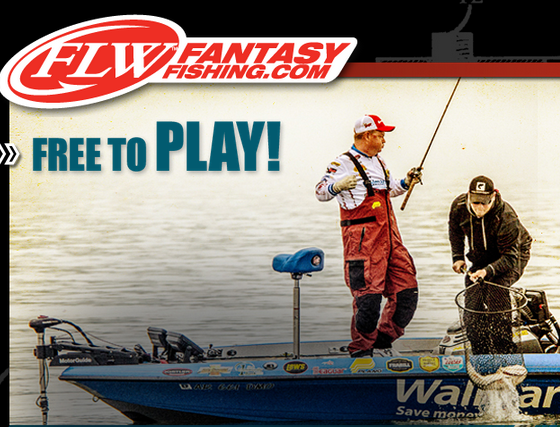 Free to play at Fantasyfishing.com

Here are Prizes this year: 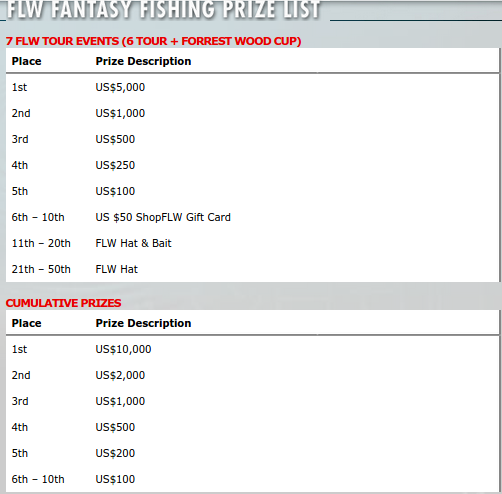 I would have to say FLW has taken back the mantel of the top fantasy bass fishing game to play with this prize structure.  I really should put more thoughts into my picks than I have in the past few years.  The only thing I don't like is they kept the $100 salary cap.  I would prefer to just pick the 10 anglers I want to have on my team for each tournament straight up.  It does look like they toned down how much the "Top Angler" will cost us to buy compared to last year, which was my biggest complaint with last years game.
Posted by Basspastor at 6:16 AM 0 comments

Here is the key info from the Bassmasterfantasy.com:


Fantasy Fishing begins each year in advance of the Bassmaster Classic. To play, fans simply choose an angler from each of the five “buckets” whom they think will outperform all the other anglers who are in the same bucket. The Fantasy Fishing player who performs best overall during the Classic wins a $2,500 gift card to Bass Pro Shops.
Play continues with the commencement of the Bassmaster Elite Series season, March 19. From then on through the rest of the season, the top player for each event wins a $2,500 gift card to Bass Pro Shops, and the player who accumulates the most points over the course of the season wins the grand prize, valued at $37,293 — a Triton 189TrX boat with a Yamaha VF150LA motor, a single-axle trailer, MotorGuide trolling motor and Lowrance Mark 5x.

So except for your groups it's first place or fuhgeddaboutit.

Here is my initial Bassmaster Classic roster, which is subject to change. 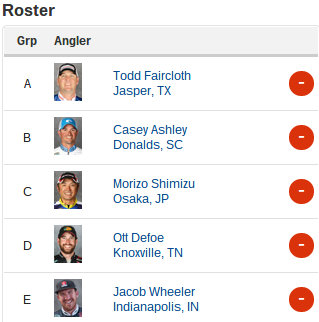 Posted by Basspastor at 2:13 AM 0 comments