The Lake Fooled Me, Platte Not Quite Open Yet 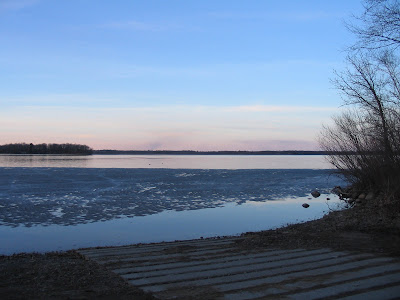 Well I'll be dipped in bull manure, Platte Lake did not open up today according to my reckoning.  Being able to drive by boat from the Public Access to Jenny's.  Unbelievably the NE wind didn't completely eat away the ice in front of the access today. 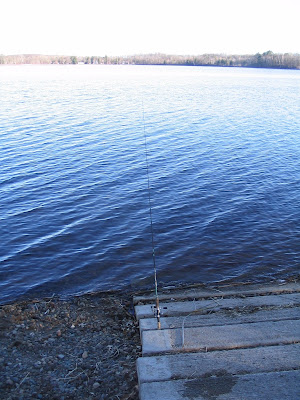 Rock was open for business.  Even heard my first loons out there tonight.

Full Fishing Report For the Night at the Log Blog.
Posted by Basspastor at 11:28 PM 1 comments

1st Bullhead of the Year

Platte was a surprise with the Eastern side of the lake ice free.
I thought maybe I would be able to call Platte Lake Open when I got done fishing, but the access was still iced in.  Tomorrow is the day. 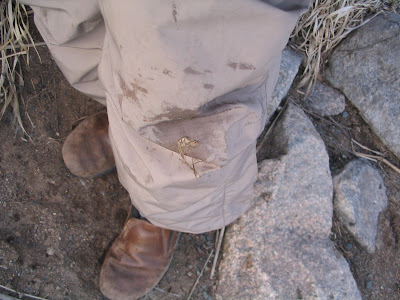 The line broke a the pike was flopping up on shore.  It almost got away; I had to go down on my knee to grab it.  First bullhead of the year is a toothy.  It bit in shallow water, so I wasn't entirely sure if it was a fish or maybe I had gotten caught on a weed.  I set the hook and it felt like a small fish and I thought maybe it might be a silver bullhead, nope toothy.  That was the only bite I had tonight.
There was a noisy male Mallard duck tonight over on the SE side.

Goal Achieved: #7 Under Technique And Tackle 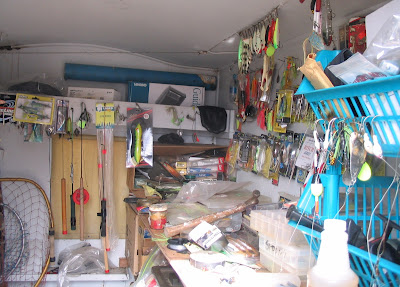 I never got around to official opening the Tackle Warehouse last year.  I don't store much of my tackle in it anymore.  It's mostly full of old junk and extra plastics.  Sometimes I use my little man cave to work on securing my jig and spinnerbait skirts so they don't fall apart.

Today I was after some dogfish candy. 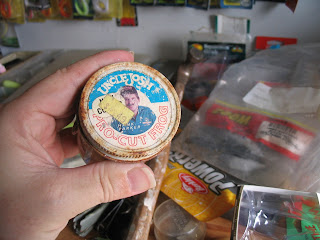 I haven't used a pork frog in several years.  I won both my first and second Minnesota Bowfin Club Grand Championships with pork frog.  I thought it's about high time I get back to using them to chase another title.

It was such a nice day today.  In addition to playing around in the tackle warehouse for most of the afternoon, I also got the Muse Gold/Daiwa Emblem combo spooled up with 10lb Fireline. I headed out to check the lakes around 6:40PM.  I fished quite a while at Bulldog but didn't get anything there. 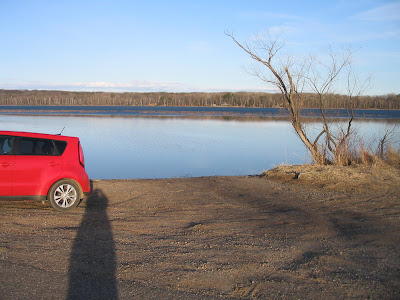 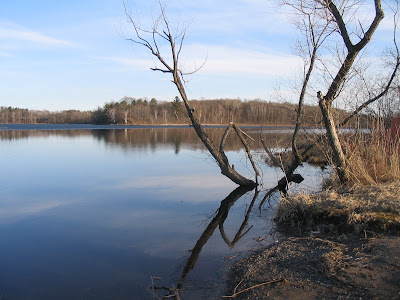 I would say Bulldog is 1/8th open. A little more progress on Rock Lake. 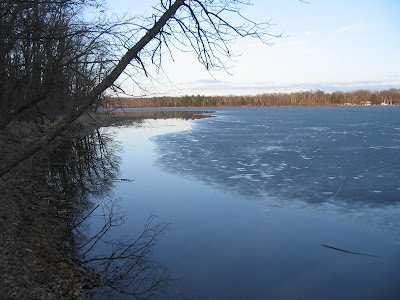 As for Platte/Sullivan ice hasn't pulled away from the Eastern side of the lake for the most part yet.  From the access, it looked like a different story on the NW side. 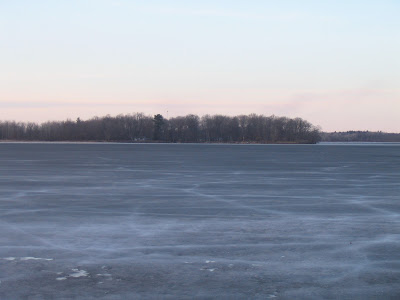 It looked like the SPRO was now totally open (no picture).  Channel Inn Bay was open. 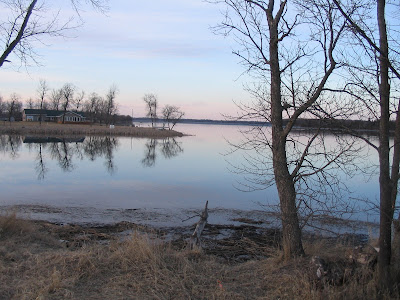 I think Platte is about 1/8th open as well. 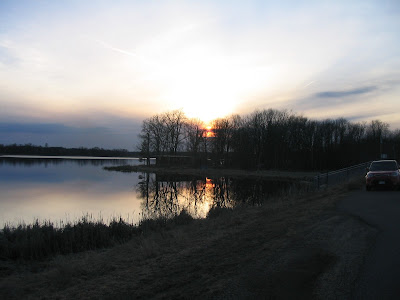 I really thought I might catch something at the GOMH tonight.  There was some baitfish activity and a muskrat scarred something out of the bulrushes that made a fast-moving V wake and no muskrat ever came up that I could tell.  I had a lively minnow on too.  I stayed until it was dark and I could no longer see the bobber.  I think the total lack of current moving under the bridge is why I didn't get anything tonight.  The anticipation of getting that first open water fish of the year and the warm weather made for a fun trip even if I did get skunked.
Posted by Basspastor at 10:30 PM 0 comments 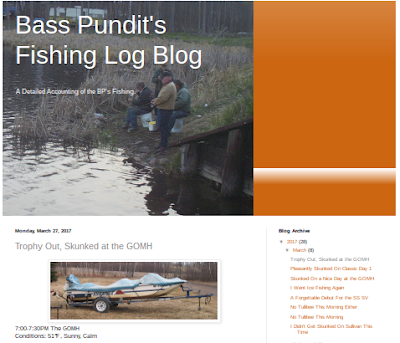 I'm not totally thrilled with the way the top of the blog looks.  What I need to do is play around with that picture of the Grumpy Old Men at Pic Monkey to see what I can come up with there.
Posted by Basspastor at 12:57 AM 0 comments

Trophy Is Out Of Storage

I have to get it cleaned up, but now the tow vehicle is now at the shop.  Hopefully the Expedition will be ready by the time my parents head South on Friday morning. 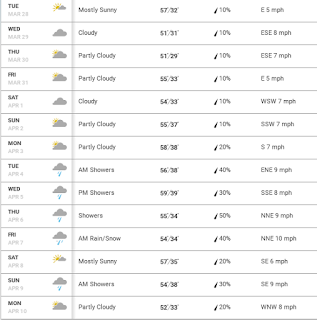 I will update with an ice out progress report later on tonight.  There was open water on the South end of and along the western shore of Long Lake. 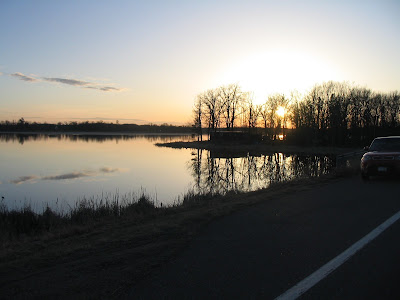 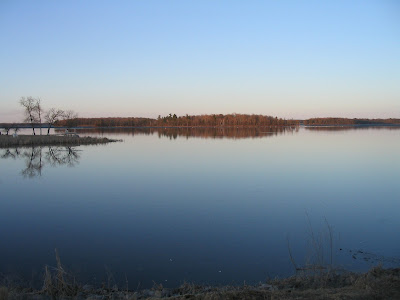 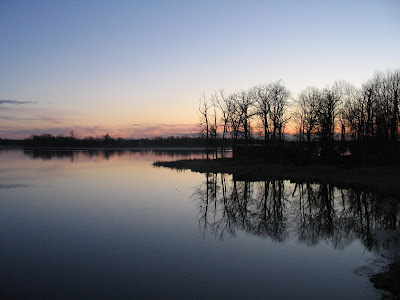 Ice is not totally out in the Sullivan Platte River Outlet; With the dark ice and calm conditions I was able to see the ice that is there clearly.  It got cold tonight fast once the sun went down.

Ice was officially called out on Lake Minnetonka today.
Posted by Basspastor at 5:28 PM 0 comments 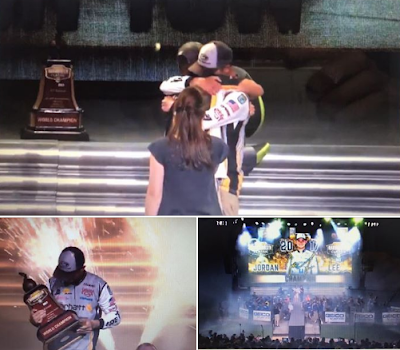 The largest comeback in Bassmaster Classic history and quite the tearjerker with his family coming up to celebrate with him.

Open Water At the South Tip of the Small Island 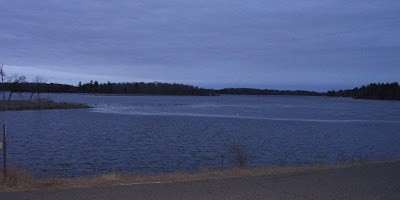 It was cooler than forecast yet again today.  The sun did come out for several hours in the afternoon, but the wind was out of the North again.  It only made it to 44℉.  I slept in today, so I didn't catch much of the Classic fishing today.  I left to go check things out after I watched KVD weigh his fish.  First I stopped at Bulldog. 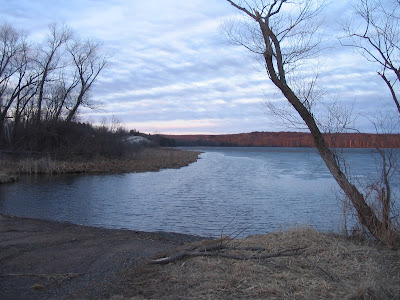 Then I checked out Rock Lake where the tree had been removed from the road. 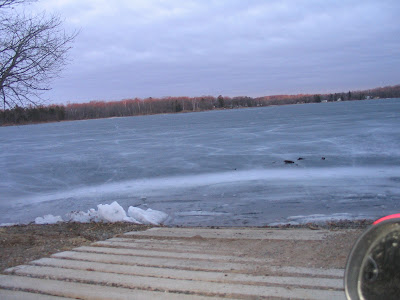 Last stop was the GOMH.  I don't think Sullivan Platte River Outlet was completely ice free, but will be tomorrow.  At this point I'm predicting ice is off the area lakes by next Saturday April 1st, no foolin' 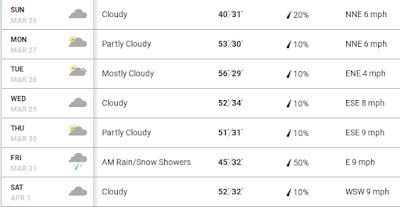 If we don't get much sun, then maybe it will be after April 1st.
Posted by Basspastor at 10:26 PM 0 comments

I watched The Classic down at Lake Conroe all day.  It stayed cloudy with a North wind.  It got up to about 41℉.  I was kind of bored by the weigh in so I headed to the GOMH.  There is still some ice in the SPRO and open water hasn't progressed much toward the small island in Platte.  There was more open water to the North in Channel Inn Bay.

I wasn't really expecting to catch anything in 30 degree water, but you never know.

I  fished for about 5 minutes in the wind on the NE side, then I switched to the SW where it was actually kind of pleasant.  I got better acquainted with the Daiwa SS SV and the 6'10"Med Tatula and I tuned the Vision 110 Knock Offs I put hooks on.  Maybe they will catch me some fish some day.  I like the colors, but the quality of the lure blank isn't the greatest.  I didn't realize I had to put hooks on them, so I overpaid a little bit.  Oh Well.

I ended up fishing for about an hour.  Not a hint of a fish.  It was just nice to be out.
Posted by Basspastor at 11:29 PM 0 comments 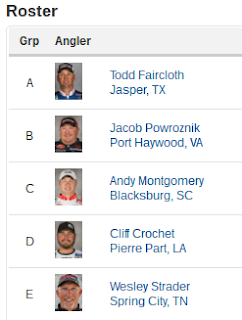 I decided not to go with Keith Combs, who is the prohibitive favorite in Group A and to win the tournament.  I basically picked 4 solid anglers and 1 wild card, the Cajun Baby.
Posted by Basspastor at 11:33 PM 0 comments

Not Much Farther Along 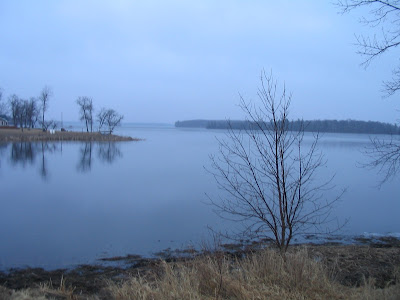 Temp was above freezing basically all day, but temps didn't get out of the mid 30's. It was cloudy and breezy out of the South for most of the day.  I should have brought some rods along as it was quite pleasant when I went to check things out tonight.  Probably the same eagle from the other night flew in front of the car in almost the same place, pretty cool!  Muskrats were out and about at Bulldog and Platte.  Swans and Geese flying around in the haze.

Posted by Basspastor at 8:35 PM 0 comments 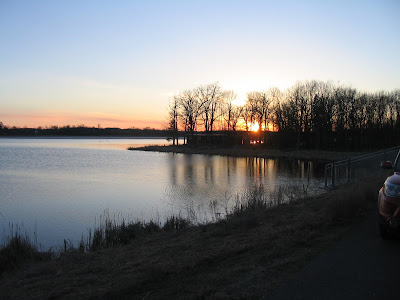 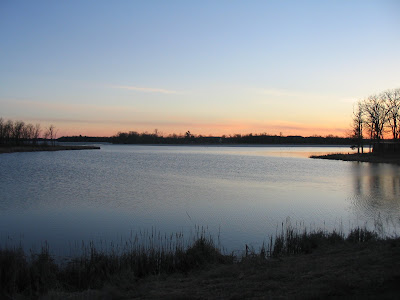 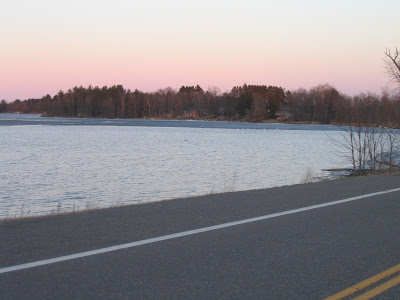 If anything it was colder than forecast today.  I don't know if it got above freezing or not.  With the sun and a bit of wind I thought there might have been some progress in the ice out department, but there wasn't much.  As I was leaving the driveway to check things out 5 good sized deer crossed the road, just to the North of our property.  As I headed West on the GOMH road a huge eagle flew in front of the car about 15' up and about 30 yards out, pretty cool.  No body was fishing on Platte tonight.  I also drove to Bulldog and took a picture of two C-130 airplanes in the distance.
Wish I could have gotten the picture about 10 seconds sooner when I first saw the planes.  It was a really cool sight. 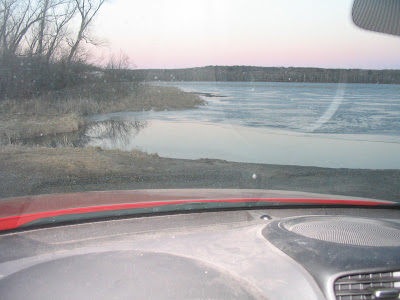 Posted by Basspastor at 8:42 PM 0 comments