1st Dogfish of the Year!
Yesterday I went to Mille Lacs for a little bit of multi-species angling. I started in the Isle Island Canal for panfish. I caught 2 small crappies 1 sunfish and one milting perch. There were tons of baitfish in this canal along with several muskie; At one point I had two 40 something inch muskies swimming side by side right under the boat. Apparently the crappie had been going good in the canal up until the cold weather a couple of days ago.

As the day wore on I deceded to try "Dogfish Nirvana" which is a very small bay over by the State Park Isle Bay. For some reason there always seems to be dogfish in this particular cut. I got in there and started tossing a 1/2White Jig and pig. As I made my way in I spotted a nice doggy right in front of me. I was able to make a couple of casts and bounce the jig off his white nose, but he didn't bite. The boat then passed over the fish and I had to spin around. I respotted the fish and cast passed it. I then hopped the bait closer and closer, sure enough it struck and I set the hook. I fought the dogfish until it was plum wore out and then I netted it. It was a dark fish (looked a lot like doggy drawing above) that measured 30inches. YES! What a way to start for doggies this year.

I think I saw another smaller fish in "Dogfish Nirvana" too.

Various news outlets are reporting that a leaky bottle of J.J.'s Magic Dippin Dye fish attractant yesterday forced the closure of the Hueytown, Ala. post office. In addition, 20 workers were sent to hospitals in the Birmingham area.

Apparently, officials were at first unsure whether the concoction was lethal. The Associated Press reported that six workers had difficulty breathing and were rushed to hospitals as a decontamination measure. Others reported a burning sensation in their throats.

And as its name implies, J.J.'s Magic Dippin Dye also contains lure dye. Workers initially thought the substance was caustic and had burned the floor.

The threat of a terrorist attack is anything but funny, and BassFan, every day, thanks the men and women who put themselves in harm's way to keep up safe. But there is one line of an AP report on the event that we got a chuckle from, and you might too: "Many anglers are familiar with such concoctions and use it without any protection."

Posted by Basspastor at 1:15 PM 0 comments

No dogfish yet. I've only had one good day with the Crappies.

The Weather: To nice to blog.
Posted by Basspastor at 10:26 PM 0 comments

Crappie:
1. Catch 14inch or bigger
2. Find the Crappies this spring on Platte 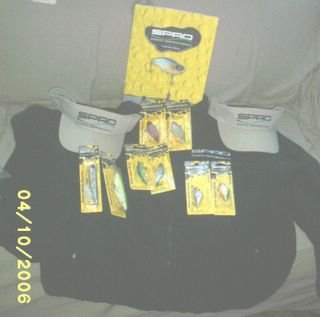 Here is what I won in the Spro Monthly online prize drawing.

So far I'm quite impressed with the quality of the baits, although I have not caught any dogfish with them. I like the Spro Dawg better than the Lucky Craft Sammy of similiar size. The Spro Dawg throws a country mile. The Aruku's look like they will be fish catchers. The Fat Cranks are super shallow runners like Mann's Minus 1's and the Crank 25's are a unique bait that is shaped just like a small sunfish or perch. When bass season opens these baits should get serious consideration. Unfortunatly I did not get any of those new Dean Rojas Bronze Eye Frog's, but beggars can't be choosers.

It's that time of year again, so once and for all.
BP's Philosophy of MN Closed Bass Season over at Bass Pundit Preach

Hellabass on Wrapped Boats
Posted by Basspastor at 2:10 AM 0 comments

The Weather: Has been unseasonably warm, so I've been fishin instead of blogging. Also this computer is a bit mixed up right now so that's been a factor in my non-blogging as well.
Posted by Basspastor at 1:09 AM 0 comments

Boat in the water, motor fired right up. YES! 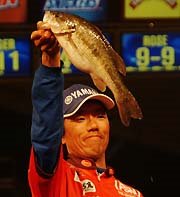 Can Shin do it agaIN?

In case you are unaware Japanese Angler, 2004 FLW Angler of the Year, Shinichi Fukae is in the hunt at Beaver Lake Wal-Mart open to win the $200,000 first place prize. This would be his second FLW tour victory of the year. He won $100,000 at Lake Okeechobee, the first tournament of the year. It is quite a test to win a 200 boat field Pro Tour tournament, two in one season would be incredible.

FLW Walmart Open Live blogging:
It 's down to Shin and Mark Rose, both have 1 fish left and Shin has a 2lb7oz advantage.

Mark Rose weighs his last fish: Has a Smallie it weighs 2-2 he needed 2-7 to take the lead Shin Wins Shin Wins !

We didn't get the rain that the twin cities had, but that didn't matter. We are free and clear.

The Weather: Extended Forecast Bring it on! 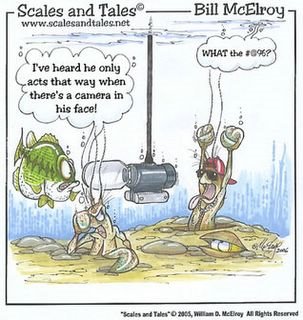 Platte Lake Ice Out Update: I'm going with tomorrow for the official "Platte Ice Out Day" even though the big western and big northern bay will still be ice covered but our bay will be ice free thus Jenny's launch would be open along with about 70% or more of the lake. I could fish the lake tomorrow so tommorrow it will be.

Goings on at the GOMH
Posted by Basspastor at 11:05 PM 1 comments

Explain this to me : At the recent Bassmaster's Elite Series Tournament at Santee Cooper Kevin Van Dam and Alton Jones were disqualified for breaking the rules. (For background click on names). For more background read here

Rule 12: "In pro-am type events, pros will fish from the front deck, non-boaters from the rear deck, no exceptions. Non-boaters are only allowed to drive the boat in emergency situations in both practice and competition with the exception of loading and unloading from trailers."

Now in Kevin's case the "non-boater" who was "a competitor" drove the boat in a non-emergency situation and that garnered the DQ. I think this punishment was harsh and unnecessarily severe, but clearly KVD broke the rules.

However, I have learned that angler Randy Howell was looked into for violating the rules but was not disqualified. According to the story at Bassfan this what happened:

On the first day of practice I had my brother-in-law practicing with me. We got hung up on a stump, and it was one of those situations. He cranked it up to get me off the stump and idle me over in an emergency situation, which is legal

Now never mind the definition of emergency situation or not, Randy clearly admits he was practicing with his brother in law who was not a "competitor" in the tournament. Should not Randy Howell have been guilty of breaking Rule 3?

I just do not see how it is legally allowed for a boater to fish with a non-boater who is not also a competitor. Someone explain it to me, please?
Posted by Basspastor at 1:05 AM 1 comments

Platte Ice Out Update: The rain and wind have been chipping away. From what I can tell the lake is now 30to40% open with a real shot at being fully open in the next couple of days.

Be sure to visit the Bass Hole now that he is fishing again.
Posted by Basspastor at 8:33 PM 0 comments

On the FishingMinnesota.com Bass Forum this question was asked by SLP:

I'm just curious what people think a great day on a Minnesota lake would be from a quantity standpoint fishing for Bass with 2 guys in the boat. 10? 20? 30? 50? 100? The few people I have talked to say 75 plus days are pretty common in the spring(late May early June). What do you think?

Now instead of answering the question in a straight foreword answer, most responses consist of talking about how any day fishing is a good day and quantifying it does not matter blah blah blah. Finally after a bunch of those sophist responses Tom Wilson answers with this:

SLP,
While you got a few answers here, and they are all right on about the company you keep, I don't think anyone answered your question. From the end of may (after opener) until about the 4th of July, for two people in a boat fishing for an average 6-7 hours 100+ fish is not uncommon at all. At that time of year, shallow water fish are the key, and if you know what you're doing, then 50 bass apiece is absolutely doable.

BP's responce: I am a fisherman that is geared to pay attention to numbers and so feel qualified to offer an informed responce. I think the answer depends upon the lake being fished, the weather conditions, and the pattern/presentation being used.

Obviously some lakes have better bass populations than other lakes and that will be the number 1 deciding factor of guiding expectations for bass "by the numbers." 2 Guys would be having a pretty darn good day on Platte/Sulivan if they could put 50 fish in the boat. On Sylvia/Twin in Wright County catching 50 is probably an easy mark, 75-100 about average and 100+ a pretty good day with 125 to 200 fish days possible. I don't know which lakes or rivers Mr. Wilson fishes but I would say calling 100+ fish days "doable", meaning in somewhat common, is a bit of a stretch. You have to really be whacking them pretty good to be boating 20 fish an hour for 5 straight hours; many lakes just are not capable of that type of output.

As I mentioned before the weather conditions and pattern fished obviously play a role. If the fish are shut down because of conditions than even a great bass lake can be pretty stingy. Also if you a chuncking a jig at docks, 100 fish days are gonna be the exception rather than the rule even on a great dock bass lake.

The Weather: Today was below normal cool and cloudy. Despite that a several acre large patch of water has openned up the NE corner of the main bay on Platte. Had we gotten that rain and the sun that was predicted today than there probably would have been serious momentum towards ice off being next week. As it stands I'm sticking with yesterday's prediction.
Posted by Basspastor at 9:40 PM 0 comments