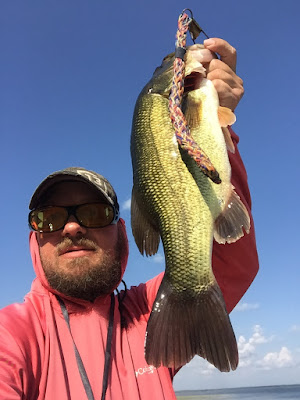 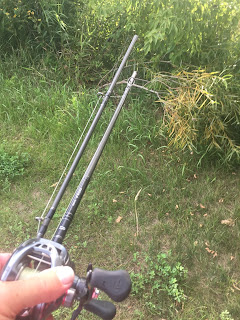 Conditions:
Started late due to fog turning sunny around 11:30 or so. Light WSW Wind.

The Day:
Started with a fog delay, so we bumped the weigh-in time to 4:30PM. I think we had our 5mph blast off at 8:20 or so. Herman and I were headed to the East end so it was a good long time before we started fishing. We stopped at some reeds along the South shoreline with some rice and pads closer into shore. I got a pike on a frog along some reeds and then the first bass of the day (1.94lbs) along some rice.  Herman got a 2lber out from some rice on a spinnerbait. That made his day. We hit some Reed/Rice/Pads in the middle of the Eastern Bay next. I got a 1.27lber out of some pads. Had a couple of probable pike swipe at me and not come back for seconds. I launched one pike that bit 12 feet through the air when I set the hook on it.  I then had the 2.40lber ambush the Sparrow about 8 feet out in open water after coming off of some pads. We worked around the backside of the stuff we were fishing. I cast to some pads landing on the edge when a 3 to 4lb fish body slammed the Sparrow. I quickly dropped the rod and set the hook sending the Sparrow back towards me at Mach 1.  The dand fish didn't eat the frog. I threw the kitchen sick at her trying to get it to bite again, but she gone!  That was my last bite in this stuff. As we worked our way over to the access area I switched the Sparrow from my 7' 4" Xtra Heavy Frog Rod to my 7'4" Heavy Tatula Frog Rod. It was clear that I was going to be throwing a frog for the next few hours, so I wanted to do it with my favorite rod.  Over by the access I had a 14/15 bass get off at the boat. I figured that fish would have been culled so I didn't stress it. The sun came out.  We were working some open water between slop pockets when I caught a dink. When we got to the next slop line I lost another 14/15 fish, no biggie.  We went through a little dead zone of rice.  We were approaching a rice/pad point where Bruce lost a bite during pre-fish. I think Herman missed two separate fish there. I think Herman missed another fish in some pads/reeds.  The area turned to pads. Herman gave me control of the boat as he made sandwiches. I had a pike miss me.  I then had the 2.66lber give his location away. I caught her on the next cast.  I doubled back to re-fish the area and got the 2.73lber. The sandwiches were now ready so we sat there and ate. I finished first so I went back over the area again and got the 2.22lber. We doubled back one more time and didn't get anything so we proceeded along the pad edge. I got me big fish of the day which weighed 2/13. Shortly after that, I had a fish smoke the frog and bury me in the pads. Thinking it was another good one I put way to much pressure on the rod and it snapped. The fish was still hooked and I reeled in a 13-inch dink. I quickly put the Sparrow back on the Xtra Heavy and tried to get the fact that I busted my favorite rod in the world with little hope of being able to procure another one out of my mind. I caught a couple fish that didn't help and Herman lost a couple of quality blow-ups.  Herman was not happy about missing the fish and that his trolling motor was continuously needing to be freed of weeds. And I wasn't happy I had busted my rod.  Smitty came over to talk letting us know his smallest fish was 3lber.  After he left I should have suggested we re-fish over the pads again. I don't know if Herman would have gone for it or not seeing the trouble the weeds were giving him, but the thought didn't even enter my mind. I did want to go back to the area where I got my first quality bite. That is where I got my final cull of the day, a two and a quarter. At about 2:30PM we left for the West side of the lake. We went to some reeds where he got some bites in pre-fish. Nothing going on. We then tried some docks. Herman got a dink. We then went to some reeds/pads along the Southside of the lake. Herman got his third fish and I got a couple of dinks.

The Results: My fish weighed 15/15, which put me in 4th Place. The tournament was won by Smitty's 21/05 bag. Beau won the Co-Angler Challenge again with 16/13 which put in 2nd Place. Getting "wood" for the first time was Jonathan Notsch in 3rd Place with a 16/7 bag and Bruce Groulx with the 4/1 Lunker.

My Thoughts: This tournament is going to sting for a while.  Breaking my favorite rod because I was so amped up burst my bubble.  Devastating! I love that rod.  I can't believe I only had that one 3 to 4lb bite and the doggone fish didn't get the frog. It's like losing the smallmouth that would have filled my limit on the Mississipi. I am snakebit as far as getting wood. We really should have gone back over that pad area a second time.

On the positive side, fourth place is solid points. I am now definitely in the hunt for the Super 6 as I currently sit in 5th Place and the next tournament is on Little Boy/Wabedo.  A lake I feel good about. 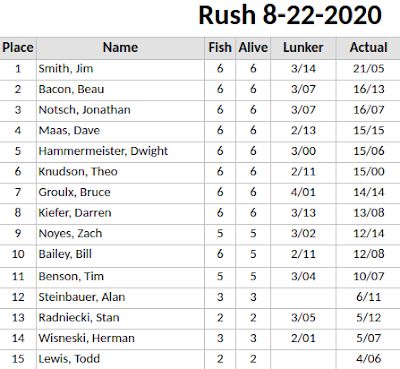 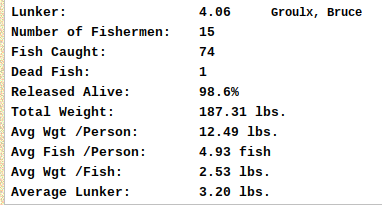 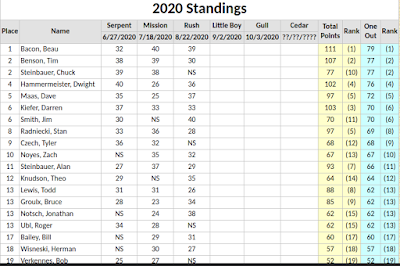 Posted by Basspastor at 5:03 AM 0 comments

Snatcher's at Rush Lake (Ottertail) My Plan and Rods

I got two three-pounders and one two-pounder on a frog in the hour and a half we spent fishing the slop during pre-fish. I also missed a couple of bites and Bruce missed 3 or 4 as well. If the slop bite is AWWWWN I have a feeling I am going to have a really good day because Herman didn't find anything in his two days of pre-fishing.