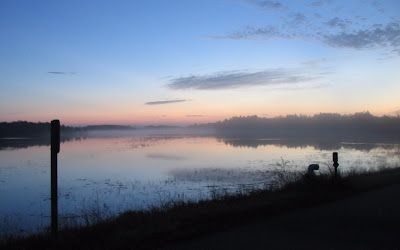 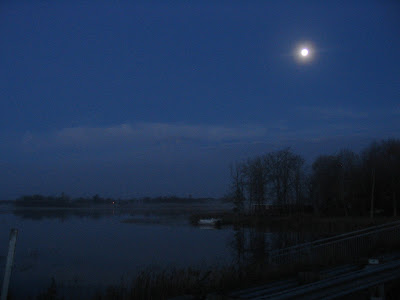 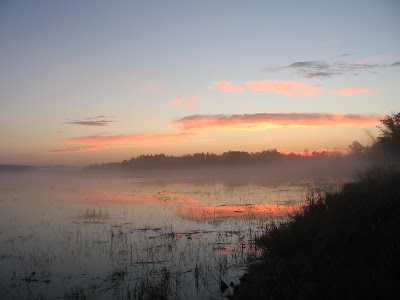 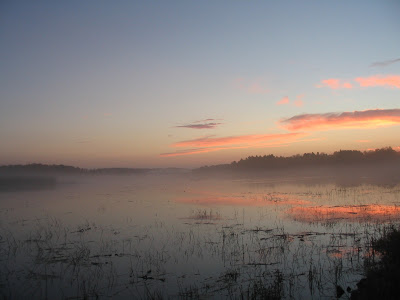 This turned in to my longest day on the water in who knows how long.  I was totally worn out and didn't get on the water again until 4 days later.  This blog is being written 11 days later.

I started at the GOMH and didn't catch anything.  I then went to Rock Lake and didn't get anything there either. 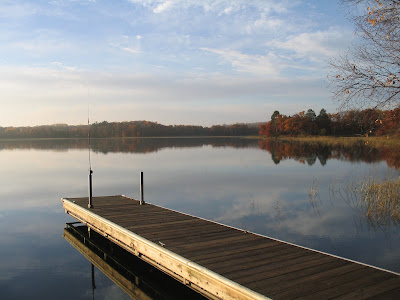 I then got in the Trophy and tried out front and at West point, not getting a thing.  I then ran to the North end of the reeds across the way.  There was a seagull and some baitfish activity on the flat.  I started throwing a River2Sea Rover, a walking topwater across the weed flat.  I had one fish blow up on that but not get it. 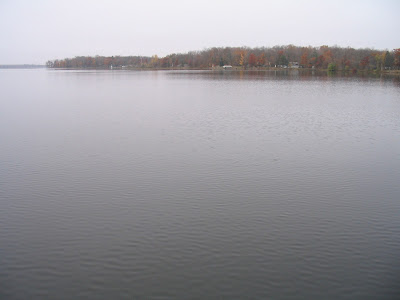 Conditions seemed just ideal for topwater, so I switched to a Vixen, then the small Whopper Plopper, and then to a River2Sea Bubble Walker.  The Bubble Walker was what they wanted.
That was the first fish I ever caught on the lure.  I then had a 16.5" not get the lure, but I was patient and just let the bait sit still for about 45 seconds.  I then worked the lure for a couple seconds, then killed it again letting it sit for about 15 seconds.  When I started up again the fish blasted it.
You can see I was working about the length of a cast from shore, casting parallel to shore, sometimes shallower, sometimes out more.  The 18.5" was my fourth fish on the Walker at that point with a couple of more misses.
I got over by the start of the reeds on the North end of Don's Bay when I got this long, but skinny pike.
I worked the flat back an forth for a number of hours getting enough hits to keep things interesting.  I missed my fair share, that's for sure.
For a little while it looked like it was going to rain and a light wind came up.  I switched to Pop Max and immediately got nailed by a typical fish.
I then got a small pike and then missed 3 or 4 straight hits.  I then let myself get pulled off of the juice.  Instead of going back to the juice I decided to fish the reeds across the way.  Stuff was getting blown up well inside the reed bed so I worked my way in fishing a Pad Crasher.
I caught a couple and missed a couple doing that.  It was now cooling off and I was getting tired.  I elected to try "The Dock" and was rewarded with a good bass on the Hack Attack Jig.
That worked out so well I tried the next dock down and got an even bigger fish.
I then hit the two docks and our dock on my way in.  I didn't get anything on the docks, but missed two fish in the pads in front of our place.  I was beat.  On the way home I bumped a deer and sent it rolling into the ditch.  It got back up and kept on running.  It was the darndest thing.  No damage to the Kia Soul, thankfully.

I've been fishing a lot again this month.  All my trips are blogged over at the Fishing Log Blog.
Posted by Basspastor at 3:48 AM 0 comments

It Was the Fuel Line, Stupid

In May 2013, the motor on the Trophy started giving me problems. When I would open it up to full throttle, it would start to sputter like it wasn't getting gas.  We tried switching the fuel lines, and the problems persisted.  I only got the boat out a few times that year because the fishing was so phenomenal at the Grumpy Old Man Hole.  In 2014 the fishing at the GOMH was pretty darn good, and I didn't put the boat in the water once.  In 2015 with low water fishing at the GOMH declined precipitously.  However, instead of turning to the Trophy, I fished out of the Slop Slip and never got the Trophy wet.

I finally put the Trophy in the water again this year, and it was still giving me the same problems.  We put on different connector ends on the fuel line, the problem was not fixed.  It didn't really matter that much because I had the boat parked at the lake place.  I was pretty much content to fish where the trolling motor would take me fishing no farther than a quarter of a mile from the lake place.

When Pete was here last month, we ended up fishing out to about a mile away.  It was getting dark, so we started the gas motor, and on the way back, Pete got the motor to run at full throttle by holding the fuel line tight against the motor.  He suggested I buy a brand new fuel line and see if that didn't fix the issue.  When we switched fuel lines back in 2013, they were both who knows how old at that point.  I finally got around to buying a new fuel line last week.  Yep, the fuel line was the problem.  I'm so glad to have my motor back up and working correctly.
Posted by Basspastor at 5:31 AM 0 comments 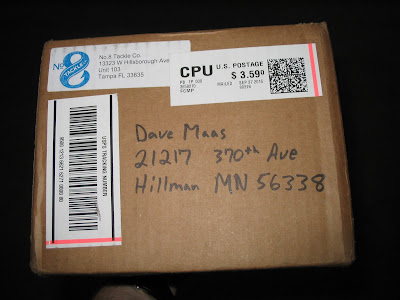 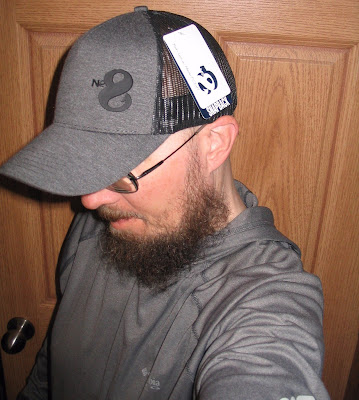 Matches my grey Columbia  Hoodie.  It should make it into a few pictures this year at the Fishing Log Blog provided the weather holds.
Posted by Basspastor at 12:30 PM 0 comments

Email ThisBlogThis!Share to TwitterShare to FacebookShare to Pinterest
Labels: No. 8 Tackle Company

9:00AM-3:00PM Rabbit Lakes
Conditions: 53-36 degrees, Alternating between Mostly Sunny to Mostly Cloudy throughout the day,  Wind out of the WNW 8-2MPH less wind towards the end.

I was asked to fish the annual Snatchers Mini Bucks Tournament by Charles Steinbauer because Nate, his usual partner, wasn't able to make it this year.  The lakes were divided into 5 holes, one for each boat. Holes 1,2,4 and 5 were in the lake and the pit was a hole #3.  We would get an hour and 10 minutes in each hole with  I drew for us to start in Hole 4, which meant we got an extra 10 minutes to fish the pit.

In Hole #4 we didn't get anything on our first two spots.  I caught a 14" keeper on our 3rd stop on a bluegill D & M Baits Piranha Swim Jig.

In Hole #5 (The northern most quarter of the lake) Chuck got 14" right away and I got a 12 incher on breen Crazy Legs Chigger Craw.  I think Chuck got another 12 incher and then got a quality 17+ fish off a dock.

Hole #1 (The farthest SW quarter of the lake) Chuck got another quality 17+ bass.  It hit like a pike and I got 13"on a Craw Tube along a reed point to cull out the smallest fish.  This is the hole the Lunker for the tournament came out of in the Slop in the far western bay.

Hole #3 (The Pit).  I think my 17'er was the first fish we got in the Pit providing a good upgrade.  Chuck got a couple of fish that didn't help and I got 1 that didn't on the craw tube.  With about 15 minutes left I got 14" that was a small up grade. 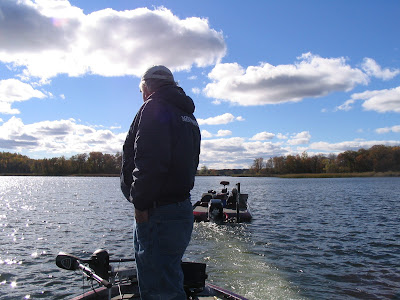 When we went to take off to go in, we didn't have enough juice to start the motor.  We had been having trouble with the electronics all day.  I was eventually able to get a hold of Guy who came and towed us in.
Dwight and Guy won the tournament and got lunker.  We got 3rd.  Here are the results. 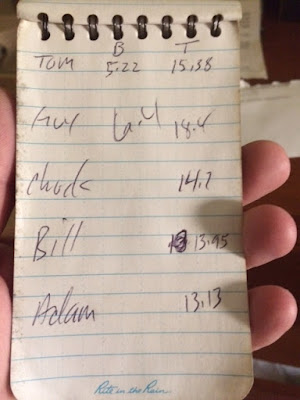 Posted by Basspastor at 9:40 PM 0 comments

Today was the 200th Day this year I put a bait in the water.  I'm pretty sure I've never fished that many days in a year before.  I didn't land anything, but I did briefly have a small toothy bullhead on and that counts as a catch for me.  Long line release.

I'm fishing a Mini Bucks Tournament, patterned after the old Bassmaster Mega Bucks Tournaments, tomorrow on Rabbit Lakes with Chuck Steinbauer.   There are 4 holes on the lake and a fifth one is the Pit.  We will have a certain amount of time to fish each one, and then I think we get the last period to go where we choose.  It's going to be a chilly one in the morning.  The 9AM start time should help at least a little.  I'm not sure if it's winner take all. I'm also not sure how many boats are fishing.  Fishing with Chuck I like our chances. I need t get to bed
Posted by Basspastor at 11:43 PM 0 comments

I procrastinated blogging these because I wasn't happy with most of the pictures I took.  Day 1 was the only day I went to the Blast Off and Weigh In. 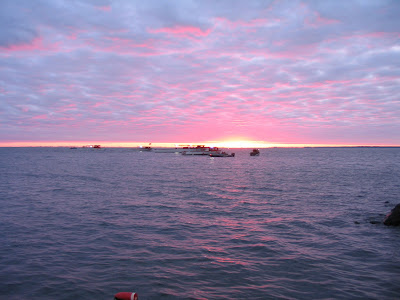 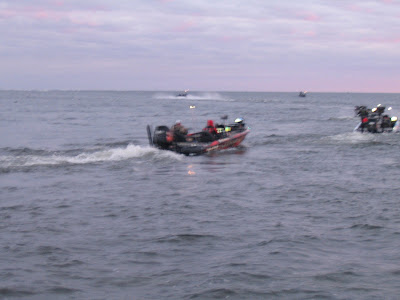 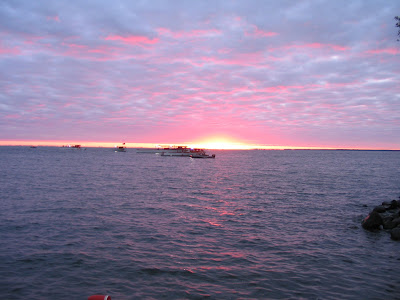 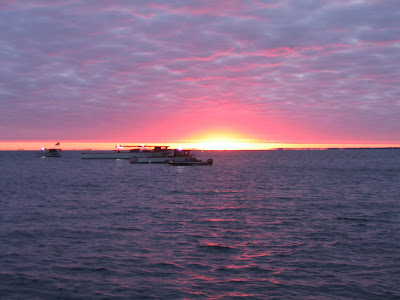 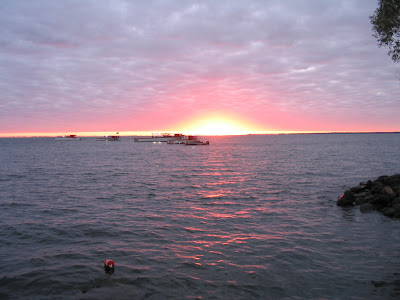 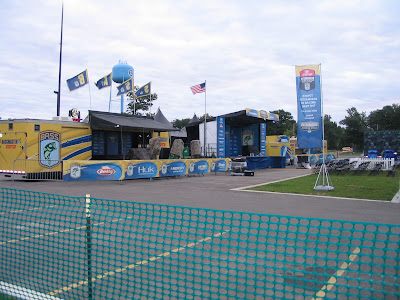 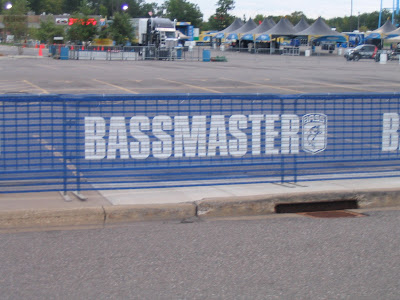 Posted by Basspastor at 4:16 AM 0 comments