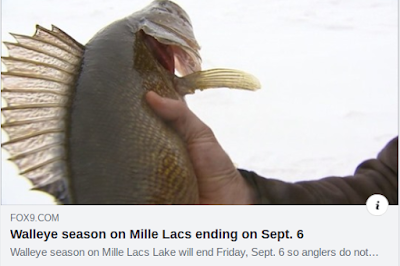 Just last week the word from the DNR was that a closure would not be necessary.  This is complete bullshit.  The lake is healthy and exceeding the quota by a little bit isn't going to change that fact.  This decision really has me steaming mad.

I have written the Governor and my state Rep. and Senator.
Posted by Basspastor at 12:50 AM 2 comments 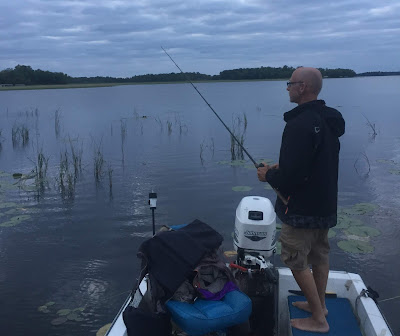 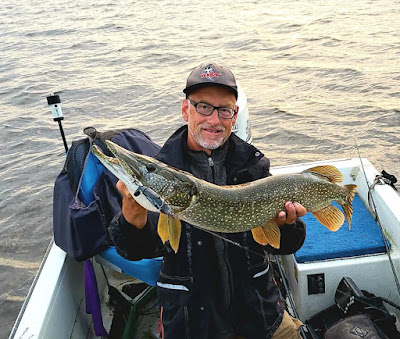 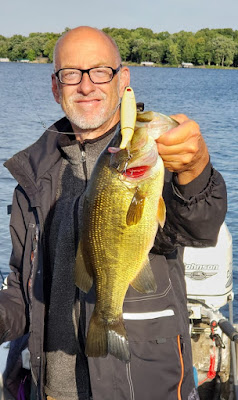 Got out fishing with Cyb Saturday Night and Sunday Morning
Posted by Basspastor at 4:16 PM 0 comments

The Day:
We started at the rice island at the confluence of the two rivers where Bruce got the two bites prefishing.  There was notably no activity going on here while there was plenty of it when we pre-fished.  We didn't get a bite.  There was some activity to the South of us just off of the rice.  When we got down there I had a fish hit my Piranha Chatterjig, but not hook up.  It jolted the rod like a pike.  That was the only bite we got along the rice.  We then headed across to the slop matt which wasn't nearly as well-formed as when we pre-fished; It shrunk significantly.  I saw a fish come out of the water.  I had bruce get me in casting range and I got a hit on the Spro Sprinker Frog but it didn't hook up.  It was a small fish.  Couldn't get a follow-up hit on a swim jig, Piranha, or craw tube.  We worked our way to the South end of the mat.  There was activity there and I was just about to say expect to get a bite when Bruce had a hit on his swim jig.  It got off.  Bruce is pretty sure it was a bass.  A couple of minutes later I had the grub tail get bit off the Piranha.  I replaced it with a Zoom Speed Craw.  We worked back over the point and I directed Bruce to take us into a cut slop.  I got my first bass there.  I was so relieved not to be skunked.  We worked up the East side of the slop mat without any luck.

Next, we went to re-work our starting spot coming up from the NW along the shoreline.  I got my second bass along the shoreline on the Piranha.  Didn't get anything on the second pass.  I think we then went a little way up the Crow Wing to where Bruce got a bass the first day he pre-fished. Bruce got a pike and I got a pike in the rice slop on a 1oz Jig/Craw.  I was so ticked it wasn't a bass.

We then tried a spot in the confluence we hadn't pre-fished and didn't get a bit.  We then ran up the Gull River to a narrow section.  I got my third bass there at the entrance to the narrow section on a white double willow white Strike King Spinnerbait.  We fished a few more spots without any luck in the Gull River.  We went back to the starting spot.  Nothing doing.

We then ran up the river.  Bruce thought he missed a bite.  I got an 11-inch short largemouth.  I thought I missed a bass, immediately threw back to the spot and got a pike that stole my spinnerbait when it came off the Power Clip.  Was not to happy about that.  We ended the day where I got my second fish.

Results: My fish officially weighed 6/01 which put me in 14th Place out of 18 anglers. Bruce got skunked and came in last.  The winner was Keith Tuma who set a new all-time record bag for the club with 24/8.  Lunker went to Ruff with a 6/03 mega pig.  Checkbook took the Co-Angler Challenge with 15/4.

My Thoughts:  I got a tough break when I drew Bruce for a boater.  He s an outstanding guy, but he is a novice when it comes to bass fishing.  I think Bruce probably would have preferred if I would have taken charge and run the boat.  If I ever get partnered with him again I'll see if he wants me to do that.  The thing is I enjoy the challenge of fishing from the back end of the boat without having to worry about controlling the boat.  I did do some boat control coaching, which I think Bruce found helpful.  If I would have taken control of the boat I would have thrown a frog a lot more than I did.  A frog was a key bait for Tuma and Ruff.

Thanks to the number of guys that elected not to fish this tournament I am basically guaranteed to reach my goal of being in the Top 10 at the end of the year.
Posted by Basspastor at 2:15 AM 0 comments

There has been far too much trepidation about this tournament in my brain.  Maybe the fishing gods will smile on me tomorrow or maybe they won't and it will be a really tough day on the water.  I've just got to fish the best I can and not allow myself to get stressed out if I miss a fish or they aren't biting.

Posted by Basspastor at 3:04 PM 0 comments 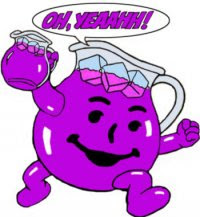 Simply put, Kirk Cousins showed he wasn't up to the task when the competition was good and the lights were bright.  That was knock on him coming into last season and he played true to form.  Hopefully, things will go better for Captain Kirk this year.  Maybe our O-Line play and running game improve and things finally click for Kirk against the top of the line competition.  I don't have any faith in Kirk becoming what we need.

The Day:
We blasted off 4th right behind Chuck Fields and wouldn't you know it he went right to our starting spot as well which was off of the big point on the North of the pit side of the lake.  Darren set us down to the West of Fields and we started working towards him.  I had a 1.91lb bass jump on my 3/8 black/blue jig pretty much immediately.  I got it in the box and it was a repeat performance with a slightly smaller fish.  The fished seemed to shut down on the jig after that. I threw out a Neko rigged Yum Dinger and got a 1.30lber on that immediately.  I think Darren got his first fish shortly after that and I got a short.  We worked back over where I got the fish to start and didn't get anything, Fields worked to the East so we went to where he started and I got 1.70lb fish that hit my jig on the fall.  After maybe an hour and a half we went to our second spot which was in the NE section of the pit lake.  I made the mistake of checking our fish while we were running and I shut the livewell on one of my rod tips breaking it, doh!  I got a 1.19  and my 2/8 lunker to fill out my limit on the jig.  I then culled up with 1.71lb fish on the jig.  Darrin was getting a little better quality of fish on a blue/black craw tube, so I started throwing that and I got a  1.63lb fish on that;  I thought the fish was a weed at first.  We were just about to leave to go fish the pads when I got a 2.05lb fish on the jig next to a dock.

The pads didn't even yield a blow-up for me, but Darren got a couple of fish there and missed some solid blow-ups.  Next, we went out and worked the roadbed.  I think I got a 2.13lb out there along with a couple that didn't help.  We went back to our second spot and I got my last fish of the day there on the craw tube (2.20).

My thoughts: I don't think I lost any fish that hurt me.  I just didn't have a shot at a kicker that would have put me in the top half of the field. 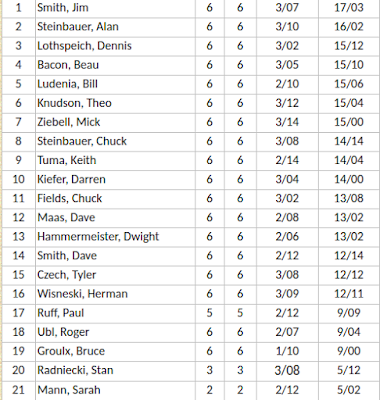 Posted by Basspastor at 4:48 PM 0 comments