Pretty Night For A Paddle on Bulldog Lake

7:50-9:30PM
Conditions:  Mostly sunny, 70 degrees, slight wind out of the South diminishing to nothing

I decided to take the Slop Slip to Bulldog for a quick trip tonight because of the light winds.  I figured fish would still be where they were last week on Thurs.  There were, but they weren't as aggressive.  I had two or three fish that I missed the hookset on and another 5 to 7 that didn't get the frog.  It was such a nice night with the loons calling as I paddled back that getting skunked didn't matter.
Posted by Basspastor at 11:09 PM 0 comments

Good Night On The Slop Slip On Bulldog (Thursday Night)

I put in at Holy Family Access and headed North into the wind.  I missed my first bite in the open area in the reeds past the dock with a pontoon.  I got my first bass out of the pads behind the reeds.
I traded of 14.5" and 13.5" fish on the Mad Maxx and I got a 12.5" on the Hack Attack Jig with a breen Chigger Craw trailer.  Then I got this beast. 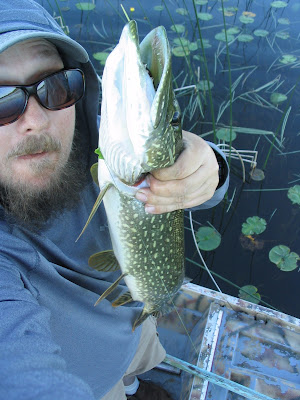 I got into a good area for prime time.
I caught about 10 fish and missed 4 or 5 bites.  On my way back in I missed one, then got my biggest of the night, a real chunk.
I was off the water by 9:35PM 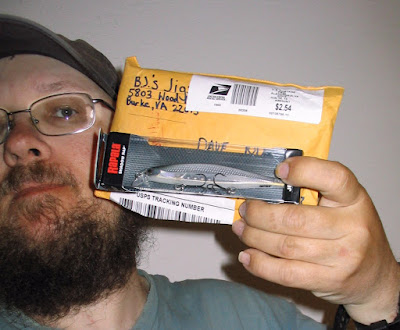 I won a prize in B.A.S.S. Fantasy Fishing game in one of my leagues (Group: Fishing All The Time).  I was the top finisher at the Guntersville event.  Always great to win something.  I should have gone to Mille Lacs and tried out the Shadow Rap tonight, but I went to the Grumpy Old Man Hole instead.
Posted by Basspastor at 11:25 PM 0 comments

A Measure Of Revenge at Farm Island Lake

The Day:  We were a bit surprised to have the whole SW slop bay to ourselves in the morning.  We spent all day there fishing the shallow rice and pads with Tru-Tungsten Mad Maxx Frogs.  My boater Roger and I both mostly threw "Sweet Revenge", but I threw "Big Sexy" in the afternoon as well hoping it might get me a big bite.  Only 3 other boats came in there the whole day and they didn't stay long.  The fish bit throughout the day with only one about an hour long dry spell  from about 9-10AM.  I got the first bite of the morning about 5 minutes in, but it was a pike.  There was a lot of baitfish activity right away in the morning before the wind came up.  Roger was up two to nothing when I got my biggest bass of the day, a 16.25" about half an hour in.  As we were drifting across the flat Roger asked me if we should drift closer to shore.  I told him I thought the fish could be anywhere.  About 5 minutes later I herd a whooosh.  A big bass had annihilated Rogers frog.  I turned my head and informed Roger about the situation as he was watching my frog at the time.  Roger got it in and it was 4lb 5oz and to tied "Lunker of the Tournament."  Roger had his limit before I got another fish.  I just wasn't getting hit.  Roger had his limit in the first hour and a half.  We had to use my push pole a couple of times.  Roger had culled two times when I got on a hot streak and landed 5 fish to Rogers none (14", 14.75", 13.5", 15.25, and 15.9").  Roger was getting bites, but missing them.  I had my limit by 11AM.  I got a 15.5 to cull out the 13.5" and then caught a couple more pike, five 12inch fish, and 14.5", which I culled out for 14.75" fish.  We had lots of short strikes and a few bad hooksets cost me some fish I probably should of had.  I had three bites on the Havoc Pit Boss but I missed all of them.  I also fished the Fluke and Horny Toad but didn't get a bite on either one of those.

Results:  My six fish weighed 11lbs 7ozs and put me in 15th Place out of 27 fishing.  Roger's fish were 16lbs and netted him 3rd Place, with the 4lb 5oz Lunker.  The winner was Guy Henkensiefken with 16-8 edging out Keith Tuma by three ounces, two of which were for a dead fish penalty.

Thoughts: Frustrating, but fun day.  Here's my theory on why Roger kicked my butt. I believe the decision to switch out my Team Daiwa-S103 with a 6:1 ratio the day before for the 9:1 ratio Revo Rocket was a critical mistake. I couldn't slow down enough with the Rocket to give the frog the look they wanted. I was trying to match Roger's retrieve, but it just wasn't happening for me when I did that.   Roger had quite a few more bites than me, but we caught about the same amount of fish.  I definitely caught more 12" fish than Roger.  That and Roger was just lucky to land casts next to bigger fish that were able to take the frog well enough to be hooked.

It really would have helped if Roger would have had a small anchor to put down when we were drifting through good water.  That would have saved Roger some frustration of dealing with the rice as well.

How much can a guy complain on a day where he caught 17 fish and set the hook on at least that many more.  The fish bit all day and I fished one of my favorite ways.  Amazingly I didn't get a single hit while walking my frog when I had the opportunities to do that in holes in the weeds.

I saw one 5lb dogfish and an 8lb carp.

Next Tournament: Woman Lake July 18th
Posted by Basspastor at 8:31 AM 0 comments 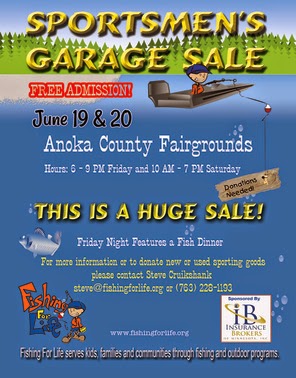 Email ThisBlogThis!Share to TwitterShare to FacebookShare to Pinterest
Labels: Fishing for Life, GEM

Well it wasn't quite sweet revenge for me today, but it was my best tournament in terms of weight by 2lbs and number of fish caught at Farm Island Lake.  I believe the decision to switch out my Team Daiwa-S103 for the Revo Rocket was a critical mistake.  My boater Roger was getting more bites than me and the only difference that I can figure was that I couldn't slow down enough with the Rocket to give the frog the look they wanted.  I still had plenty of bites, but the fish weren't as big.  I was trying to match the retrieve, but it just wasn't happening for me when I did that.  I would often have to coax a fish that I already knew was there.  Roger rarely did that.  The fish bit pretty much all day and I got to fish one of my favorite ways.  It was a fun, but frustrating day for me.
Posted by Basspastor at 7:37 PM 0 comments

Why is it my #yearofrevenge?

I've got a bone to pick with these last five lakes on the Snatcher docket.

My boater Roger and I had a pretty descent pre-fish last Saturday.  Will our pattern hold up?  I really hope so because due to wind we weren't able to establish a back up.  I really hope the fish are active in the morning on our first stop and we can just camp there for most of the day.  I am ready, let's go!

My Snatcher Tournament at Bay Lake May 30th

6:50AM-3:00PM
Conditions-  Mostly sunny, cold and windy in the morning out of the NNE, the breeze dying down a bit, and it warmed to the high 50's.

The Day:
It was cold in the morning, I did layer up properly and stayed warm except for my left hand which I had to stop fishing with a couple of times to put in my pocket to warm up.  We agreed to start on a deeper spot where we got a double on in practice.  This spot was exposed to the brunt of the wind and the fish weren't there.   My boater Todd got a couple pike and an Ok sized bass and I got a pike on a craw tube.  After about an hour we moved shallow.

I got a pike then a small keeper (12.5") on a black/blue D & M Piranha with a sapphire blue Chigger Craw.  We then moved to another shallow bay where that loon came to see what we were up too.  Todd got two small keepers.  I switched up to a bluegill color D & M Piranha with a swimbait trailer.  Very quickly I got a small keeper (12.25") casting out, then one that felt better than it was (13.75") right up next to shore.  We worked back over this area two more times.  I got a pike on the D & M and Todd got another keeper or two.  We worked into a small marina and I got a quality fish (15.75) off a pontoon with a white Zoom Horny Toad.

We then made a move to a boat channel.  As we were entering it I got my best fish of the day (15.9") off of the first dock in the entrance.  Todd caught one of his better fish in the channel and I got my limit fish (12.5") and missed one on a bubblegum Zoom Super Fluke.

We made a long move to another shallow bay.  Todd got a fish to cull and I ran the trolling motor for about 10 minutes while he got his fish figured out.  Shortly after he regained control of the trolling motor I saw a 15.5" bass take a shot at my Piranha.  I caught it.

We tried our starting spot and didn't get anything but a pike or two.  We then went back to the bay with the loon.  I had a hit on the the D & M that ran towards me and got off.  I think I got my next cull (14.5") on a Zoom Super Fluke.  Todd got a couple that didn't help him.  We got to a calm area and I got my last cull (13.25") on a Reaction Innovations Vixen.  We made one last move to the bay where I got my biggest fish in pre-fish, but didn't get anything.  And then the day was over.

Results:  My six fish weighed 10lbs even and was good for 18th place out of 30 anglers.  My boaters limit went for 10lbs 15ozs and put him in 11th place.  The winner was Nate Steinbauer with 14lbs 2ozs who caught the Lunker at 4lbs 2ozs.

My Thoughts:  I could have done without the cold front and a little less wind.  Apparently the bite turned on in the later part of the after noon, but we really struggled the last two hours.  Fish just didn't move up in the bay we chose to fish unfortunately.  Todd was really enjoyable to fish with and was very concerned that I get my limit, which I fortunately got in the 1st half of the day.

My #yearofrevenge starts at the next Tournament at Farm Island Lake.
Posted by Basspastor at 12:11 PM 0 comments