Since Bass Opener is always on Memorial Day Weekend I consider the MN Bass Opener to be a 3-day affair.

Today I slept in and didn't start fishing until about 5PM and I fished the whole time on Platte. The day was mostly sunny but had turned to partly sunny by the time I went fishing. When I first got out winds were out of the WSW at about 7MPH, eventually it got calm for about 1/2 an hour, then a 5MPH SE wind started up. Water Temps were 69-71.

My first stop was the Channel Inn Bay North Point reed bed. With my success there Sat. morning I figured this was a place I could pick up a few fish and I was right. My first bass took a Zoom Horny Toad that had sunk sub-surface. I had a fish on and didn't set the hook. The fish let go and then the Toad got picked right back up and I set the hook into a 13incher. I was having problems with the trolling motor not working at low speeds and the wind was such that I had to set up outside the reeds anchor and then fan cast back into the reeds. I caught a few bass and pike on swim jigs doing this. The biggest was this scrawny 15.75" 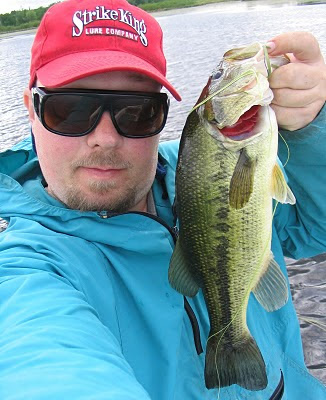 A little after 7PM I made the move to the North side of The Big West Bay where the big maidencaine bed is. I started at the tip of the maidencaine bed fishing with the Horny Toad, eventually I switched up to a clown Spro Bronzeye Frog. A fish gave itself away in close to the maidencaine bed. I pitched into the hole with a red/black Terminator Top Secret Jig w/junebug Zoom Speed Craw and was surprised when I brought in a pike. Pretty much parked in the same spot casting out away from the maidencaine bed into the rice, sparce reeds and sparse pads I got a 15" bass on the Spro. I worked down a little ways casting out again when I got a small blow up that missed the frog. I cast back and this time it ate it. I set the hook and my 40lb Power Pro snapped with a crack somewhere along the rod. Since I had a lot of line lost I figured I just might be able to catch my line. While I was moving in that direction the fish jumped trying to spit the hook. Sure enough I spotted the line but it started racing away from me. I had the trolling motor on high and eventually I caught the line and the fish was still on. Hand-lining a bass through rice isn't easy, but I got this 16" in the boat. 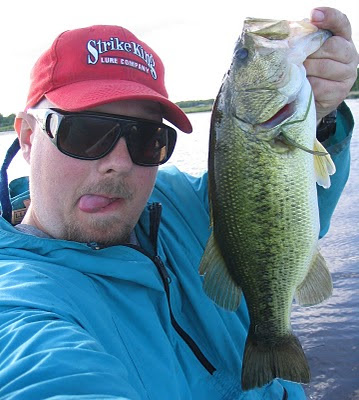 I don't know why the line broke where it did, I'm going to have to give the rod guides a close inspection. By the time I was ready to fish again I had drifted well off the maidencaine onto the rice flat with sparse pad fields. I decided to keep throwing the Spro and drift with the wind. I got a couple of smaller bass doing that.

At one point a fish gave away it's location and I cast to the spot and something bumped the brown Snagproof Bobby's Perfect Frog I was throwing. I cast back again and it bumped it again. I cast back a third time and this time got a 13" bass. I put down the anchor so I could fan cast the area. On one of my casts when the frog was getting close to the boat something that seemed to be big charged at the frog but swirled away at the last second. I made repeated casts but couldn't get anything to hit. 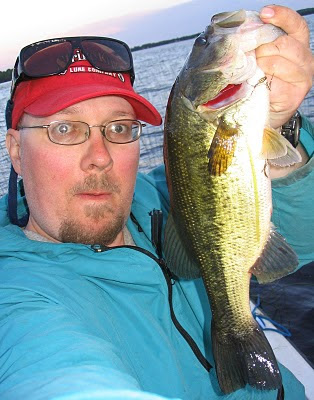 For the Memorial Day Bass Opener weekend I landed 74 bass total.
Posted by Basspastor at 11:26 PM

Love the Bass Opener....now you don't have to worry about accidentally catching 'm. lol.

I'm in between tourneys now and catching up on all the blogs I've been missing. Nice to see your catch'n.