Weather: Today it got to 69°F and was partly sunny. By the time I got out fishing at 7:30PM the sun had escaped the overcast and was shining bright in the West while it was clouds overhead and to the east. There was a 5MPH wind out of the SE.

As I got the boat ready to roll I had to replace a couple of trailers on swim jigs and I took a few casts with the new trailers. On my first cast with a wht/chart Monsoor Swim Jig with 4"pearl Action Plastics Curl Tail Grub, I brought in this bass. 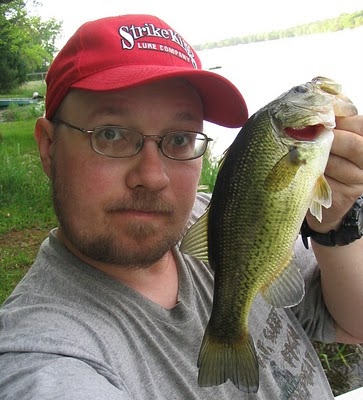 As you can see from the pic, the boat is still up on shore at this point. I had a swirl on the next cast that didn't hook up. Soon I was done messing with the jigs and I was off, headed to the North end of the lake where I have had success with dogfish and pike.

I would start out by probing a maidencaine bed. The southern most bed didn't yield anything to start with, but casting to the NE tip of the long East bed I got hit about 3 times on a blk/red Monsoor Swim Jig with blk/red fleck Zoom Speed Craw before a 13" bass finally hooked up. I made another cast to the spot and hooked up again but this fish buried me in some reeds and got off. I worked the reeds and some open water and got nothing, so I worked my way back to the maidencaine beds. I was on the back side of the southern most bed casting up to where I caught a big dogfish last year, when I caught this 15.25" bass. 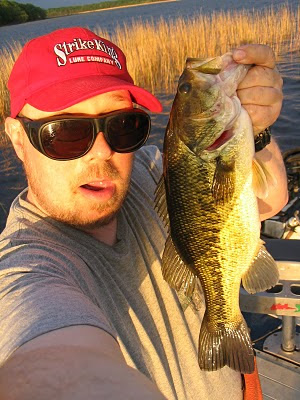 I caught it with the wht/chart Monsoor Swim Jig with 4"pearl Action Plastics Curl Tail Grub. I worked my way around the end of the West maidencaine bed and was casting North away from the bed with the same swim jig when I picked up this hammer handle. 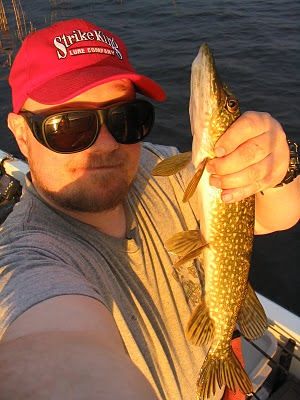 I started throwing an all chart Strike King Spinnerbait and had a good fish latch on but it got off about half way in. A little later I got this pumpkinseed on the spinnerbait. 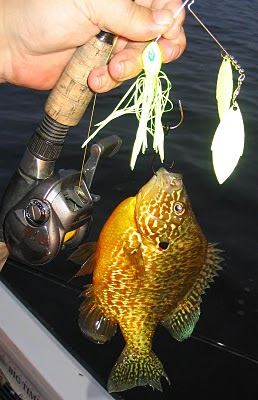 This was to be my last fish, but I did have a pike take a swipe at a swim jig next to the boat and had what I'm guessing was a nicer pike swirl at a Snagproof Bobby's Perfect Frog I was working over some new of the year rice.

I guess fishing right now is OK, but it seems to me that I should be catching more fish. As I got into the North end of the bay I was fishing matters were complicated by the emerging rice bed.
Posted by Basspastor at 11:42 PM