I think Pete and I not getting out until 9AM probably cost us because by the time we got to Mille Lacs there was little wind and it was blowing out of the SW thus making the Eddy's Jetty protected water. It was warm with an occasional breeze picking up and it was overcast most of the time, but fishing was slow. Pete messed around with a few perch in the harbor while I fished quite a bit farther out from the harbor mouths, we were on the center Jetty.

The first time my bobber went down I caught nothing. The second time it went down I wasn't paying attention, but it didn't cost me this brute smallmouth. 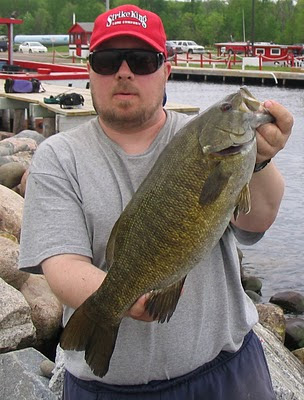 The pig was 20.25" and the biggest bass I've caught in several years. It hit on a leech below a bobber with a glow bead and pink hook.

I had a few bites from some perch and maybe a couple of other bites from real fish, but I didn't connect when I had the chance. Boats coming in were pretty much all singing the blues. We left about 2PM, so we were there for a chunk of the day.

With Pete@Platte:
After napping for the afternoon Pete and I arrived at Platte to do some boat fishing a little after 7PM. Thunderstorms were rumbling to the East and South, but we stayed dry. Basically I put the trolling motor down and we worked East towards Jenny's. The pike were far more active tonight and Pete caught 7 to my 5 or 6. I got 2 on a wht/chart Monsoor Swim Jig with pearl 4" Action Plastics Grub and the others were caught on a Storm Kickin' Stick Swimbait. Pete got his on a buzzbait. We both missed several bites and we didn't get a single bass.
Posted by Basspastor at 10:50 PM

Holy Smoke...the Bass Pastor rules!
Nice fish Dave. I wish i could have been to watch you land it.
Take care. ( The Tuffy Guy )

WOW!!! Nice Catch! Sounds and looks like you and Pete had a great day of fishing.

I think I'm gonna try using a bobber with a plastic leech.

My competitors would laugh at me, but clearly it works. Great job!

On Linders Angling Edge they actually did a TV show segment on Mille Lacs about fishing plastics under floats or possibly poppers used as floats for smallmouth.