I must have been wore out from yesterday's travels cause I slept in until 5PM after going to bed at midnight last night. I didn't get out the door until right around 8PM and my first stop was at Jenny's to drop off the walleye fillet. Next I went to the lake place to get a Norman Speed Clip and pick up some swim jig rods. I discovered I had the Norman Speed Clips with me the whole time, but I did want those rods. I threw a few casts off the shoreline with a swim jig, forgot which one, and had one strike that didn't hook up. Next I decided to hit Jenny's and missed a pike that got off more than half way in on a blk/red Monsoor Swim Jig with blk/red fleck Zoom Speed Craw. I was going to try Bulldog but that was covered up, so I headed to the GOMH.

There was a car parked on the SW side and no one on the NE side so that is where I went. No sign of Grumpy Old Man Willard once again tonight. I started off throwing a Smokey Shad Strike King Tour Grade Swimming Jig with a "Bluegill" color Action Plastics 5' Mag Grub and quickly landed this small jumpin bullhead. 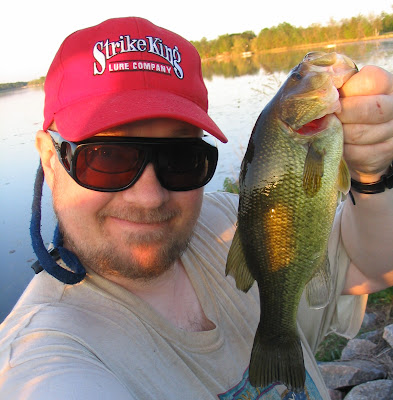 A few casts later I had a toothy bullhead on but it got off. I think I caught 1 more small jumpin bullhead on the Strike King jig.

I switched to a blk/blue Strike King Pure Poison chatterjig and hooked into a 23" toothy bullhead. I was so intent on giving the fish away to someone, that I forgot to take a picture. Neither of the two groups of people fishing wanted to take the fish. When I went to the SW side to ask if those guys wanted to take the toothy bullhead they were in the process of taking the picture of a nice jumpin bullhead. The guy holding the fish was the same kid who was fishing with a Scum Frog last night. He said they got a couple of other jumpin bullheads and a couple of silver bullheads as well.

When I got back to the NE side I noticed Bass Pundit reader Mike B. fishing in his Tuffy Fishing boat down the shoreline a little bit. We got to talking and he had been out on Mille Lacs to start the day. Apparently he just hammered pike on Mille Lacs with Yum Money Hounds. I think he said he went through 9 of them. Yum Money Hounds are a spook like soft plastic that cost about a buck a body. He also saw lots of spawning largemouth and smallies including the biggest smallie he has ever seen in his life.

After Mike left I landed 2 more jumpin bullheads and lost a toothy bullhead. 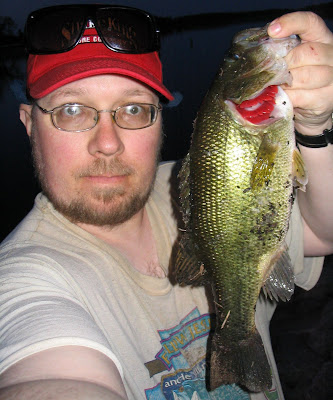 This was my last jumper and biggest. It hit on the blk/red Monsoor Swim Jig the second the jig touched the water.

Mike B. stopped by again on his way home with the boat on the trailer. He told me some more about what he saw on Mille Lacs. I forgot to ask if he saw any dogfish, but I'm guessing he would have told me if he saw any big ones. It was getting dark and Mike left. I decided to take a shot on the SE side but didn't get any hits.
Posted by Basspastor at 11:19 PM