I didn't get out of the house until after midnight last night and when I arrived at Eddy's on Mille Lacs there was no one fishing and it was dead calm. I headed out on the middle Jetty and started out by throwing Raps but that didn't last long. Next I put a leech on a Custom Jigs and Spins Glow Demon. After I lost 2 leeches with no apparent bites, I switched rods to a pink glow hook. Wouldn't you know it but the light in this bobber stopped glowing while it was out on a cast. I could still see the bobber thanks to marina lights, so I just let it sit until I pulled in for another cast. Lo and behold the bobber disappeared and I set the hook into a real cigar. 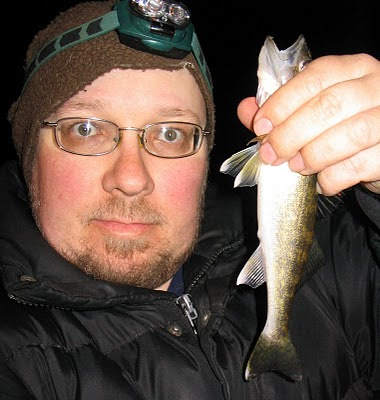 Still a walleye is a walleye and I wasn't going to be skunked tonight.

About 15 minutes later my bobber went under like it got hit with a locomotive. I thought for sure it was going to be a pike or muskie, but much to my delight it was this 24.75" eye. 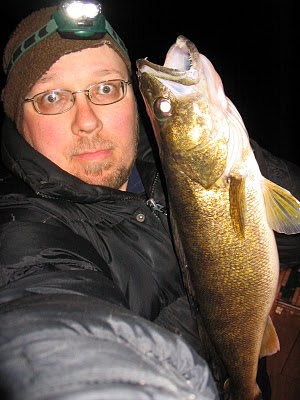 About 20 minutes later a fish hit something on top kind of close by me and then it did it again, so I quickly reeled in and cast to the spot. Sure enough my bobber went down but then it popped back up. After about 5 seconds the bobber went down and I set into a little bigger cigar (12"). 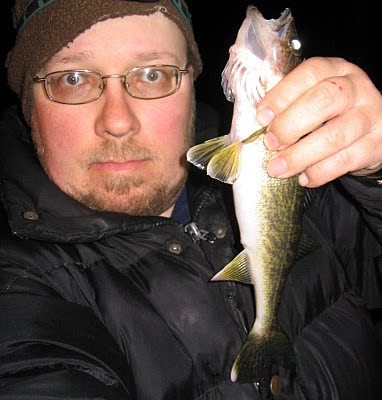 That would be all the action I had even though I stayed until 5AM.

I don't know what it says about yesterday's bite, but Eddy's Marina was dead when I left and almost no boats headed out early.

On my way home I got to watch a black bear running through a farm field. Can't say I've ever seen a bear like that ever. It was aways off the road and running away from me so I didn't get the greatest view, but cool none the less.
Posted by Basspastor at 7:26 AM

Nice job, great looking fish! Glad you made it out this weekend.