Yesterday I took a trip down to the cities and hit up a few tackle shops. First stop was at Capra's where I snapped up a few more used lures (KVD Susp Rogue, Rapala Skitter Prop, Husky Jerk, wht/chart Spinnerbait) and I also picked up a couple of black/red Monsoor Swim Jigs and 2 bags of Zoom Speed Worms for $2 a pack 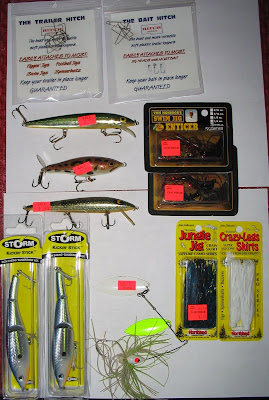 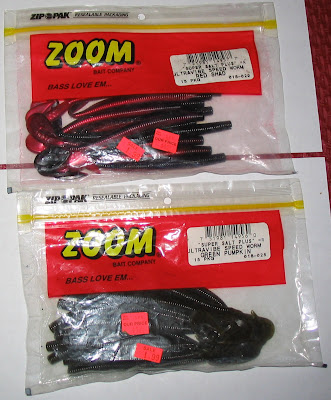 2nd Stop was at the new Thorne Brothers store in Blaine. There I picked up "The Trailer Hitch" and "The Bait Hitch" which are terminal tackle designed to keep plastics from slipping down on jigs and hooks.

And my last stop was at Mills Fleet Farm to pick up a starting battery for the boat along with a couple of Storm Kicken' Stick's hard swimbaits that were on sale for $6.99. I was kind of lucky to get the Kicken' Stick's as they were down to their last 3 and the one's they had left were in back off the retail floor. I also bought a couple of jig/spinnerbait skirts.
Posted by Basspastor at 7:35 AM

You'll love those Ultravibe speed worms. I couldn't fish a day without one now.