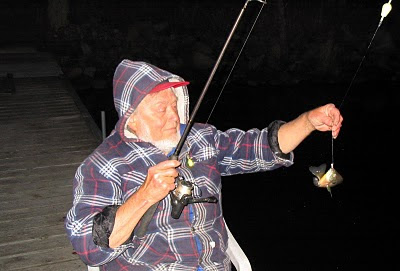 (Don W. catches a sunfish)
Tonight Pete was over for the evening and we decided to go fishing at about 7PM. Originally I was going to take us to the Rock Dock and GOMH, but Pete suggested we check in with Don W. and see if we could fish off his dock.

Don was home and was generous enough to allow us to fish his dock. He has been catching lots of sunfish, perch, bass, and pike along with a few crappie so far this Spring. We got down to the dock and on my very first cast I had something hit my Panfish Chatterbait but it didn't hook up. On my first cast to the other side of the dock I also got a hit, but this one didn't hook up either. Pete missed a fish that he thought was a pike. Eventually I switched to a glow Cubby under a bobber. Around 8:15PM Don came out and joined us. He said the bite really doesn't rev up until right before dark and he was right.

I started getting a few hits but couldn't hook anything. Eventually I tipped the Cubby with a dead minnow, all my minnows were dead, and had a fish pull the bobber under. I set the hook and immediately the fish came up and jumped; I thought for sure I had a small bass, but lo and behold it was this nice crappie. 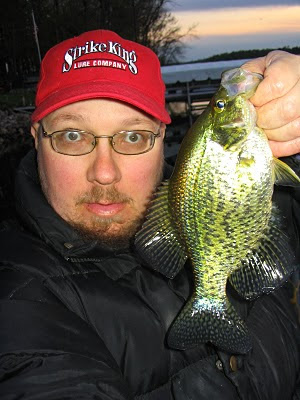 That was the last bite of the night for me. Don had a bass jump him off and caught a few small sunfish and 4 keeper sunfish and a couple of small perch. Meanwhile all Pete caught was a single tiny perch. Pete did miss quite a few bites. Don offered to let us keep to fish, but we let him have them.

All in all it was a nice calm night, but a bit cool for Pete who was lightly dressed.
Posted by Basspastor at 11:06 PM