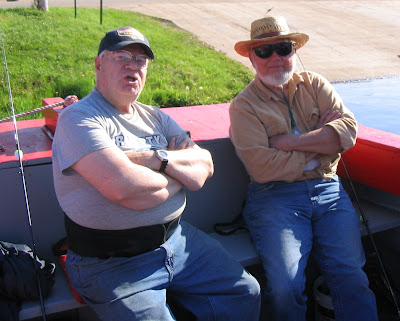 Since the weather has been so nice this week Dad and I decided to go on a launch trip with Eddy's and we invited Don W. to come along with us, which he was plenty willing to do.

The Eddy's night launch goes out from 6 to 10PM. Our Captain was Tom, who we have gone with at least once before and I think we had 12 people on Boat 8 which is a smaller launch that can hold up to 20. Two other launches besides ours went out tonight. There was a little ripple on the water to start, but by 7:30 it was flat calm for the rest of the night.

The report when we got on the boat was that the fishing has been tough. Apparently Tom's launch last night did next to nothing fishing the usual early season shallow bite, so we headed off to a little deeper water down by Spirit Island. We parked in about 26 feet of water and withing 20 minutes there were 2 keeper walleye in the boat. About 35 minutes in to fishing my bobber went down and I brought in this 15" keeper. 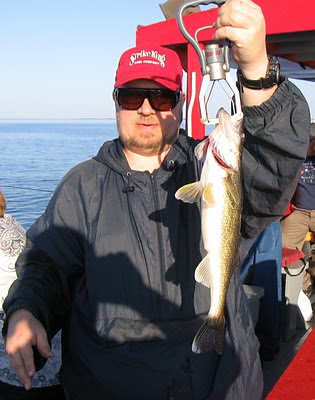 Two protected slot fish were brought in within the next half hour and then it got slow.

We moved around 8PM and went in the direction of Indian Point. We set up in about 24 feet of water and fairly quickly a keeper was on board. Someone caught a protected fish and then there was a missed fish. I was not paying a whole lot of attention and when I went to look for my bobber it wasn't there. I reeled in some slack and set the hook into a better fish, which I took my time to bring in. It turned out to be this nice 24.5" protected slot walter. 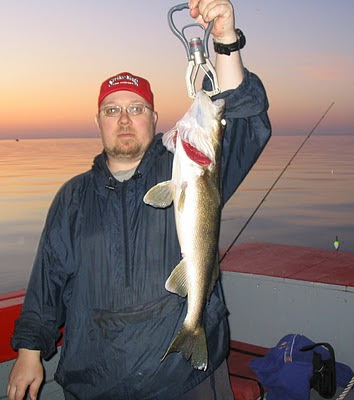 A couple of more fish were caught and lost and then at about 9PM I'm not sure why but Tom moved us forward about 50yards and dropped anchor again. At this point 2 others Eddy's Launches were close by. Some fish came in right away again. I got a bite but missed it and my leech that had caught my first two fish was gone. I got a new leech cast out and after about 5 minutes my bobber went down again. This time it was fish on and I landed this 12" eye. 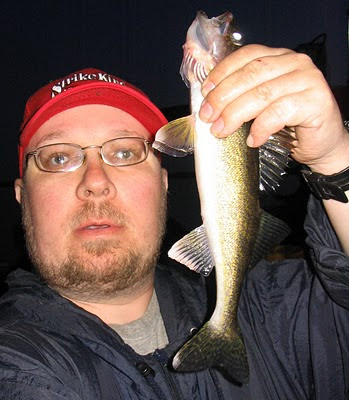 I threw the fish back. About 5 minutes later Don's bobber slowly went down and he brought in a nice 17+ inch keeper. The protected slot starts at 18" this year. About 5 minutes after that the guy next to me brought in a 16" eye and he gave it to us. I think maybe one more fish was caught on the boat after that. Dad was the only person not to get a bite. Don gave his fish to us, so we ended up with about a pound of walleye meat once cleaned.

I caught the most fish of anyone on the launch and I think all but about 3 people caught something.
Posted by Basspastor at 12:02 PM