After last night's snow the day turned out to be cool but sunny and I don't think it was as windy as forecast, but then again I didn't get out until after 6PM. My first stop was the Rock Dock. I talked to a guy who was coming off the water with his boat and he had gotten 8 crappies in a spot and then they turned off and he couldn't find anymore. The guys Grampa used to have a cabin on the lake and so he has been fishing Rock his whole life and he knows several places that hold crappies, but he only got them in that one spot.

After he left I got down to fishing and my first fish was this hammer handle caught on a glow Cubby and a minnow. 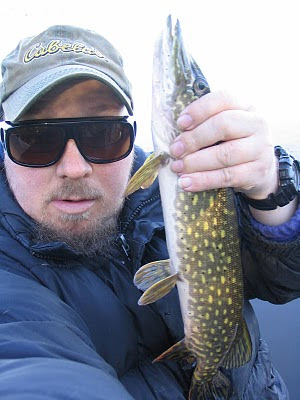 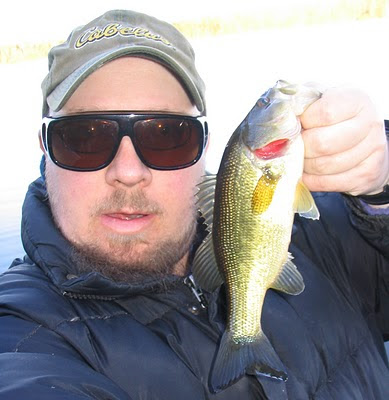 About 15 minutes later I got another bass about the same size and when I lifted it out of the water the line broke sending the little bass flopping on the dock. I quickly tried to grab it so I wouldn't lose my Cubby Jig. While I was trying to grab it, the bass flopped around knocking the Cubby out of it's mouth and right off the end of the dock into about 3 feet of water. I grabbed the fish and let it go and I could see the Cubby standing up on it's head at the bottom. I got a small X-Rap and reeled it up to the rod tip and stuck the rod in the water in an attempt to snag the jig. By some stroke of luck I caught the hook and brought my Cubby jig to the surface.

I retied the glow Cubby and decided to forgo minnows. I got a few more bites, but kept missing the fish. Eventually I landed this sunfish which was close to the dock. 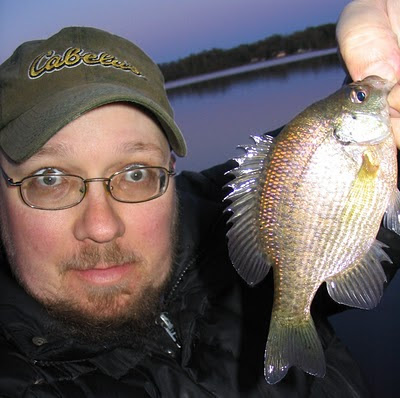 Actually this is some trick photography, it was just a little guy. 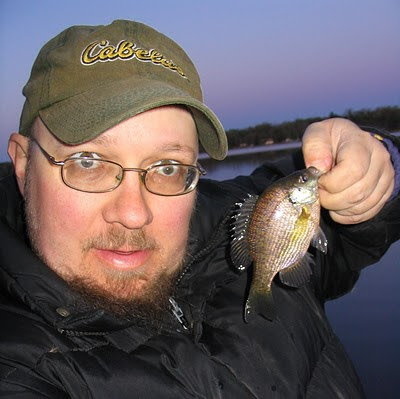 Around 8:40PM I decided to make a run to Bulldog and then the GOMH. I got nothing at Bulldog and in a bad sign there wasn't a soul fishing the GOMH. I didn't get a bite there either but I only fished it for about 15 minutes.
Posted by Basspastor at 11:36 PM