I was underway a little later than I thought I should be by about 15 minutes, but it didn't matter the Sullivan Platte River Outlet(PRO) river mouth was all mine for the taking and I had it for a good half hour plus until a couple of more boats showed up. I started out the morning casting the purple Berkley Frenzy Popper, but that only lasted a couple of casts. I managed to miss my first two hits.

This was my first bass of the morning: 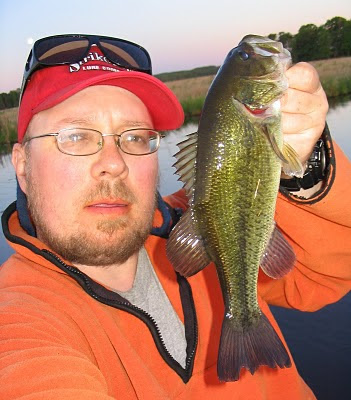 My next few fish came to the South of the river mouth on an unusual inside weedline on a olive/brown Lethal Weapon 2 Swim Jig with Watermelon Seed 5" Action Plastics Mag Grub. The inside weedline is unusual because normally the weeds (rice & pads)) grow tight to the shore there. Eventually I moved into the river and that is when 2 boats showed up and went right past me fishing all the way as they went. About 30 feet into the river I sat down in a productive spot and proceeded to whack a number of fish on Zoom Super Flukes and the purple Berkley Frenzy Popper. It seemed like a little better quality came on the popper. 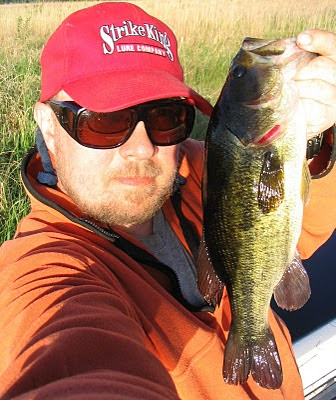 This bass was 14.75" and came on the BFP. I did work my way down to the first bend in the river but it was slow so I headed out.

Next I was going to try and drift the North end of the PRO but I quickly discovered the rice is ultra thick this year. I was even having a hard time fishing Spro Bronzeye and Snagproof Bobby's Perfect Frog in the stuff and I dare not stray from the boat lanes that were in the stuff already. I got 1 bass on a Super Fluke before I decided this was a battle not worth fighting.

Next I headed in Platte and Channel Inn Bay. I worked some awesome looking water North of the Grumpy Old Man Hole. But my only bite came from under a pontoon and the fish hung me up and got off. It felt like a good one.

Next I tried working the NW shore of Channel Inn Bay but the usually productive water was dead and some of it didn't look very good either. Eventually I worked my way out to the point and into the reeds and I started banging fish on a blue/pink Monsoor Swim Jig with electric blue Action Plastics 5" Mag Grub. The first fish to hit in this spot was my biggest of the morning at 15." 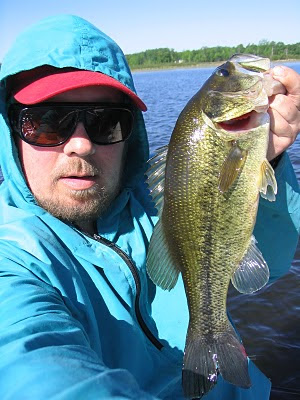 I had what looked to be a bigger bass swipe at the swim jig close to the boat. I worked the area hard and couldn't get it to bite again. Eventually the bite on the reed point shut down.

I decided to head to the NW corner of the lake where I thought the wind in the reeds might have the bass active. All I caught on a long drift pass was 1 bass and 1 pike and I think I missed a couple of other hits. There was some awesome looking water in that NW corner and I am a bit surprised that all I caught out of it was 1 small pike. It was now after 11AM and I decided fishing was kind of tough in the bright sunshine so I decided to pack it in.
Posted by Basspastor at 1:09 PM