Minnesota Fishing Opener weekend was coming to a close and I had to make 1 last trip to Mille Lacs before the night ban sets in tonight at 10PM. I arrived at Eddy's at a quarter to midnight. There was a guy and his daughter fishing at the North Jetty harbor mouth, which is where I had planned to go. I ended up taking the center Jetty and fishing where I did last night.

About 15 minutes in the girl got a fish and it was a good walleye. Not having a net and rushing the fish, the Dad broke the fish off losing the bobber in the process. It turns out they were staying at Eddy's and using Eddy's equipment. There was an Eddy's staff still around and he fixed them up with another bobber, hooks, and a sinker and also pulled a net for them off of a launch. Turns out they would need the net about 15 minutes later when they brought in a 24" walleye.

Later I found out they got a 16" keeper around 10:30PM that they gave away to someone who was coming off the lake.

Anyway I didn't get a bite. At quarter to 2AM I started throwing the clown X-Rap and made a little tour around the Jetty. Right when I started doing that a boat came trolling by on it's second pass and for a second time brought in a fish from right out front of the Jetty about a long cast and a half out. By the time I got to the North Jetty the Dad and girl where headed back to the hotel.

On my very last stop at the North Jetty harbor mouth I caught an edible golden sock. I say sock, cause that is how it fought. 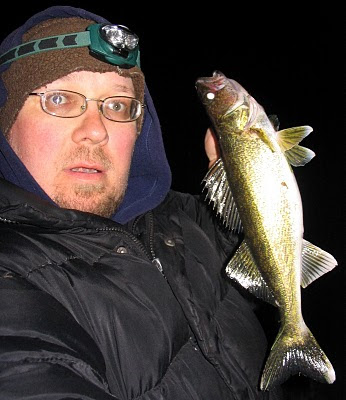 
Updated: PS forgot to mention that after I caught the walleye an absolute giant of a muskie swam by. I couldn't really tell it's girth, but it's length had to be at least 50 inches. I have never seen a muskie even close to that long ever. They are out of season and I had no interest in casting to it, even if though there is the possiblility it was a giant pike.
Posted by Basspastor at 4:07 AM