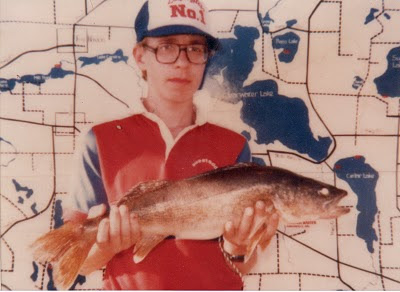 (5.5lbs Walleye Caught MN Fishing Opener 1985.)
Pic from Little Jim's Bait Shop Annandale MN
Certainly one of my most memorable MN Fishing Openers was in 1985, when I was 15 years old. Just like pretty much every year the 85' Opener was spent up at the family cabin on Sylvia/Twin Lake, now called East and West Sylvia, in Wright County Minnesota. Keep in mind growing up I was much more into bass, then panfish, and then pike; We were not a family of walleye fishermen. However, this particular Opener we would try our hand at walleye fishing. Dad had just purchased a Hummingbird LCD Fish Finder, which was pretty much the cutting edge technology at that time and so we were prepared to strike out onto Lake Sylvia after walter (Note-The family cabin was actually on Twin).

It was a sunny and fairly warm day with moderate winds. I went out in the old family Alumacraft Fishing Boat with my brother Todd (At least I think it was Todd) and we were accompanied by a boat of my Dad's co-workers. I don't believe Dad went out on this mid morning trip. We drove all the way out to the big sunken island in Sylvia and started fishing in about 30 feet of water with Lindy Rigs and a Leech. At this point I could probably count on one hand the number of times I had fished with a Lindy Rig. I was fishing the Lindy Rig on my prized baitcasting outfit, a Shimano Bantum 250 on a 5'6" Berkley Stinger 100% graphite rod.

I believe we were just doing a controlled drift or maybe back trolling with the trolling motor when my brother had a problem. I put my rod down and went to the front of the boat to help fix whatever was wrong and quickly solved the issue. On my way to the back of the boat I noticed the tip of my rod was bending indicating something was up. I grabbed the rod, felt that there was indeed a fish and set the hook. I knew right away that it was a good fish and I backed my drag off. The fight was on and this fish didn't disappoint.

Those Sylvia lakes are extremely clear and I spotted this monster well below the boat. Much to my delight it actually was a walleye. I got a little nervous, but I was determined not to lose this fish and so I played her as carefully as I could. After what seemed like a long time I got the fish up next to the boat and my brother netted it.

As far as I knew the fish weighed 10lbs. I don't know if I had even caught 10 walleyes total in my life up to this point and all of those that I had caught were 2lbs or under. When all was said and done, I'm pretty sure I was shaking.

We fished for a couple more hours but this was to be the only walleye we caught, which isn't a very big surprise because I had almost no clue about what we were doing. The fish was a total gift from God.

When we got back to the cabin everyone was very excited and we drove into Annandale so I could get my picture taken at Little Jim's and enter the fish in a contest they held. I didn't win the contest, but I was a huge winner anyway. We ate the fish.

Great Memory!!!
Posted by Basspastor at 1:53 AM