Nice Night on the Lake 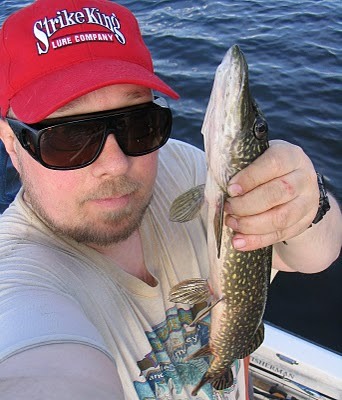 I can't remember if I was on the water by 5PM or 6PM. I think it was a bit before 6PM. Tonight I put the trolling motor down and went in the other direction. Right off the bat I had a pike follow the all white Strike King Spinnerbait to the boat. About 2 docks down I got hit by a pike a couple of times but it didn't hook up. As I was going around the bend I picked up my first pike on the all chartreuse Strike King Spinnerbait by a dock. 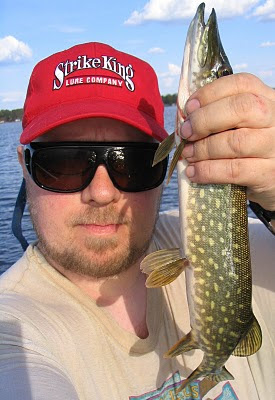 Ok not a very big fish, but it was a start. On the other side of the same dock I got hit again and reeled in another hammer handle.

There was a pretty good lull before I caught my next pike on a sexy shad Strike King Red Eye Shad. This particular Pike went 22inches and would be the biggest I would get. Around the South Platte Lake Drive Peninsula Point I got another little pike on the Red Eye Shad.

I was fishing along the South side of the SPLD Peninsula Point when I missed another pike. As I got further into Loon Sex Bay I tried a swim jig and lost a bass. Next I started throwing the purple Berkley Frenzy Popper and I caught a small bass. I saw some movement and cast to it, and came out with this sunfish. 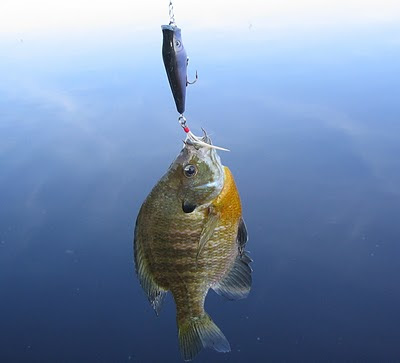 There was a fair amount of fish activity going on in the bay so I headed towards the middle of the bay and got a fat 15inch bass and had what I'm guessing was a pike wake to the Frenzy Popper but not hit it. There was quite a bit of activity in closer to shore so I headed in. Complicating matters was the closer I got to shore there was a combination of last years weeds and new rice to foul up the Frenzy Popper hooks. If it was just the new rice or just the old weeds I would have been ok cause I would have been able to see the old weeds which where the problem; The popper came through the new not so thick rice just fine. Anyway I landed another chunky 15 inch bass. Then missed a bite and then had what I'm guessing was a big dogfish annihilate the popper, but all I got was weeds. Basically the next 20 minutes I put on a clinic on how not to fish in moderate cover and I didn't catch a thing. I just wasn't equipped lure wise to fish in that junk where the fish were. I did miss a pike hit by Loon Sex Point and then it was time to go.
Posted by Basspastor at 11:00 PM