Tonight I headed out just after 7PM and since it was so nice out I decided I would hit the GOMH real quick and then go take the boat out..

When I arrived at the GOMH, Grumpy Old Man Willard was there along with 2 young guys that were just arriving. The were on the NE side so I took up the SE side. I missed a hit right away on a Strike King Tour Grade Swimming Jig Smokey Shad with Action Plastics 5" Bluegill Mag Grub. A few cast later I hooked into a good fish on a long cast but it got off a quarter of the way in. Casting towards the bridge this jumpin bullhead latched on the jig. 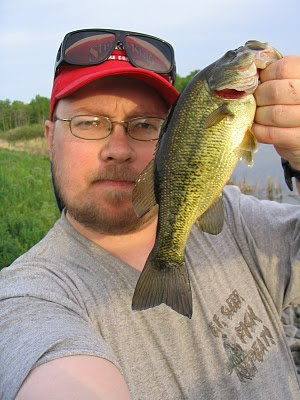 I switched up to a blk/red Monsoor Swim Jig with blk/red fleck Zoom Speed Craw and was immediately tagged by this little toothy bullhead. Very quickly after this I caught 4 or 5 jumpin bullheads that were 11-14" long. The action quick pretty much and it was coming up on 8PM, so I headed for the lake place.

I think I was on the lake by quarter after 8PM, but as I was just starting out I realized I left my bag with the camera in it on shore. As I was headed in at full speed on the trolling motor on my way in I spotted a 23 or so inch dogfish right in front of me. I picked up the bag and then tried to relocate the dogfish but couldn't find it. I started moving at a steady pace in the direction of Jenny's. Much to my dismay nothing was going on and a little breeze started up out of the NE that would make travel and casting in the new of the year wild rice more of a chore than if it would have stayed calm . I couldn't buy a bite on a spinnerbait. I eventually hooked up with this 15" bass on a wht/chart Monsoor Swim Jig with wht 4" grub. 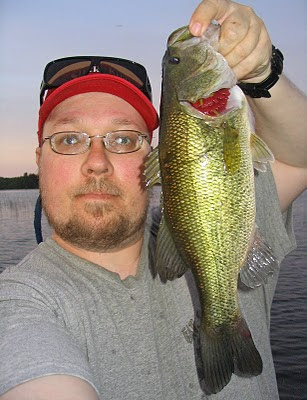 A couple minutes later in the same general area I got a 12" bass on the same swim jig.

I worked past Jenny's and was throwing a purple Berkley Frenzy Popper when I got this little guy. 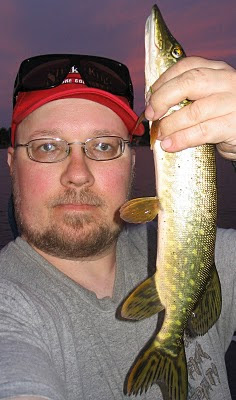 This was to be my last bite. I think I headed in at around 9:10PM so I was out in the boat just about an hour. Lousy fishing for the conditions. I just don't know where the pike that are normally in this area could be.
Posted by Basspastor at 11:12 PM