The weather is about to turn nasty for a couple of days so I figured I better get the boat with the new/used motor in the lake today when it was going to be reasonably decent outside. I had everything ready to roll around 6PM. Much to my amazement as I pulled in to the Rock Lake Public Access, the Rock Dock was in. 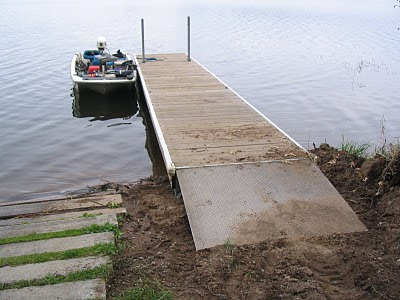 The motor started right up and so I took her out for a spin to see how fast the 25 horse would go. I had loaded in a bunch of gear to weigh down the boat just like when I will be using it in the summer, plus I had the trolling motor battery in front because I planned on doing some fishing. I was a bit disappointed that out of the gate the motor only just barely made 21mph. However I had the manual trim at it's lowest setting and so I started putting the motor up one notch at a time. Each notch gained me about .5 miles per hour and I settled in at the hole that pushed the boat right at about 24mph. Still a little disappointing as I was hoping this motor would put me in the 26 to 27mph range. It will be interesting to see how fast I can go with a passenger.

Once I was satisfied that I had gotten the best performance I was going to get. I ran into the Platte River Outlet (PRO) to do some fishing. The PRO is basically a fair sized shallow bay that gets weed choked in the summer and it is where the water flows out from Rock down a small navigable stream (best if by canoe, but I did make it from Rock to Platte with a motor boat once) into Platte Lake. I was surprised to see that the lily pads had already come up big time in the PRO.

I ran all the way back to where it narrows down to the stream and there is a beaver lodge. I cast out my glow Cubby below a bobber and on about the 5th cast a fish made a V wake right at my bobber and the fish nailed the bobber taking it under. The bobber came out of the fishes mouth when I set the bobber and I reeled in real fast and quickly changed up to a blk/red Monsoor Swim Jig with blk/red Zoom Speed Craw and threw back in hopes it was a big dogfish. On about my third cast the fish waked right behind the jig and took a nip at the speed craw and turned away before I had a chance to see it. It was calm but cloudy and so seeing down into the water away from the boat wasn't the best, thus I had to blind cast and couldn't sight fish. I am pretty sure it was either a big dogfish or a fair sized pike. I had a couple more wakes that didn't hook up down by the beaver lodge and then I slowly made my way East working the Northern area of the bay. I had a couple of fish bump my lures and one fish stole a tail on a white Zoom Super Speed Craw. Basically it was starting to get dark and I had worked my way back to where the PRO bay narrows before it opens up to Rock Lake and I thought I was going to get skunked, when this little bass hit the Monsoor Swim Jig over some dead rice. 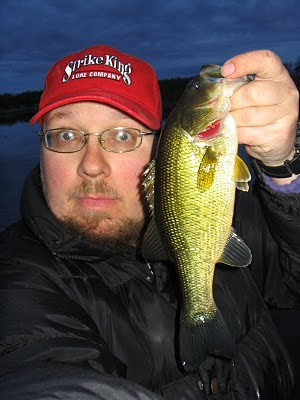 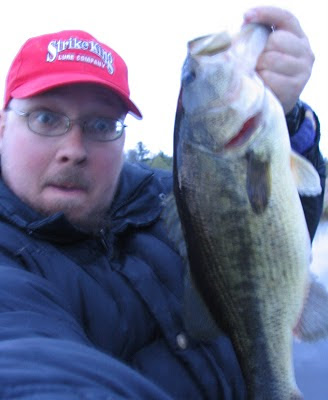 I accidentally changed some adjustment on the camera and so this pic for some reason looks lighter even though it was taken 10 minutes later and it was darker out than the first fish picture. Also this was the only pic of about 5 I took that was reasonably in focus.