That was my reaction when I saw the conditions off of Eddy's Jetty. 10-15mph E SE wind so I went to the corner of the North Jetty. I thought it was going to be a serious whack fest, turns out the fishing was just OK.

I started casting a couple of minutes past midnight throwing a purple perch Husky Jerk because I whacked them hard on that color in similar conditions in 2007 (and 2007 Part Deux). That didn't pan out so I switched to a gold husky jerk.

After about 10 minutes it was "fish on" and I landed it. 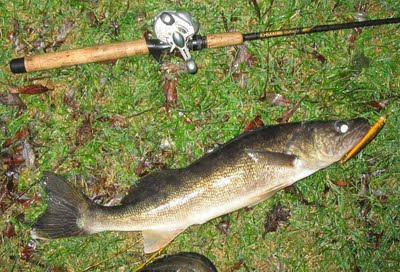 About 10 minutes later it was fish on again. 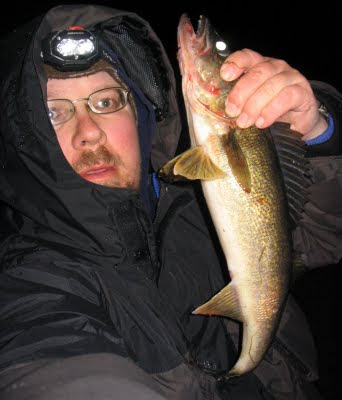 I went for about 15 minutes without a bite, so I switched to a glass perch color and I got two on that. 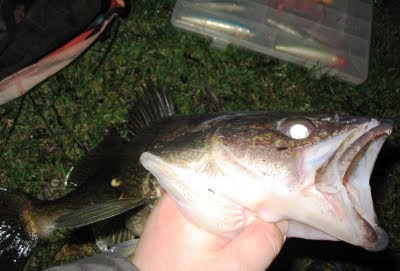 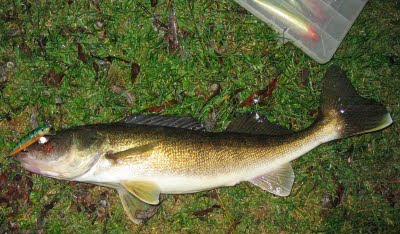 This one, both pictures, went 25" and was big fish of the night. 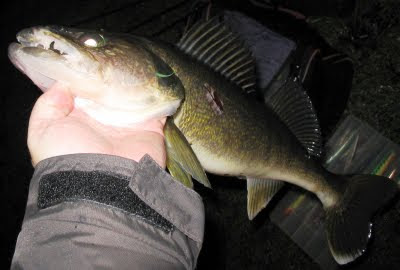 I then had a long lull and tried several baits before getting this 22" on a white Shallow Shad X-Rap. 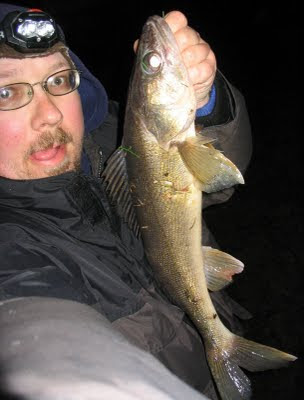 I got this last fish around 2:15AM. Soon after that my upper back started to really bug me and by 3AM I had to give up the rap throwing.

I went and got my bobber rod and went up the center jetty and fished the North harbor mouth. There had been 3 guys fishing at the North harbor mouth from the North Jetty and they got a total of 4 Eye's. After about an hour I got a bite and missed it. I quickly put on another leech and cast back to the same spot. Sure enough it got picked up and I reeled the slack and set the hook. This one looked like an eater, but it got off. That was my last bite. I stayed till a little after 6:30am but the fish were just not going like I would think they should be.

I'll be back tonight.
Posted by Basspastor at 9:19 AM

Live leeches or Gulp! or something artificial?