Weather: Today was sunny and in the mid 60's with a breeze out of the NE about from 3 to 10. As I fished the wind would come and go.

Tonight I arrived at the Grumpy Old Man Hole right about 5PM and I set up on the NE side. I started off throwing a clear smoke sparkle Berkley Havoc The Deuce double tail grub on a ball head jig and I was quickly rewarded with an 18 inch toothy bullhead. 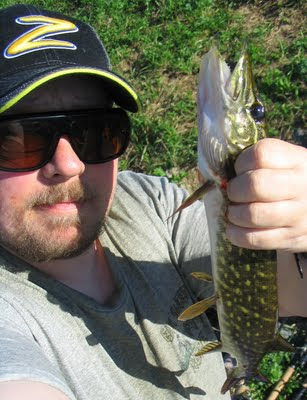 I didn't bother to ask if anybody wanted it and threw it back. I started getting some small jumpin bullheads, several of which were jumpers. Next I tried a couple of swim jigs with no luck whatsoever.

I pulled out the River2Sea Wide Glide that I won in a contest and tried to work it. It didn't help that it was breezy and I couldn't work it right. I tried later when there was less wind and still couldn't get the hang of it. The lure is suppose to glide from side to side. It takes a different cadence than a normal walk the dog bait. I'm skeptical that I am going to like it, do to the difficulty in working it properly.

Eventually I put on a black/blue Strike King Pure Poison chatter jig with Berkley Havoc Craw Fatty black blue flake. It didn't take long and I got this 20" class fish. 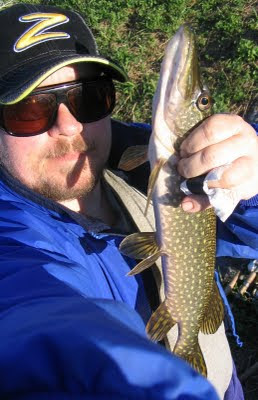 I gave the toothy to a guy and girl that were fishing. The girl had just left to go to the South side and had been throwing a spinnerbait right where the fish hit. I proceeded to miss a couple of toothy's and then it got slow when the wind picked up.

I was hoping the Poison/Fatty off the bottom when I had a hit and it quickly was apparent this was no little fish. It took a couple of powerful runs pulling drag before I saw it was a toothy. I couldn't see the lure and the line was coming out the side of it mouth. I thought for sure it was going to break me off, but the 14lb Fireline held and I landed this 35 inch beast. 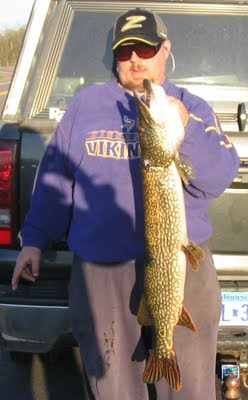 The guy who took the picture thought it was a good idea to take the picture with the truck as a back drop. I wish he hadn't. This pike went back in the lake. I wish all people would throw back pike that size so they have a chance to get to 40". At 40" I don't care if somebody keeps it for the wall. This is my biggest GOMH toothy bullhead and biggest Platte/Sullivan Pike. However Cyberfish caught one quite a bit bigger than this one a few years back in shallow slop in like July or August on a hollow body frog. I wish we had a pic of that fish.

After this one I might have gotten a couple of more toothy hits but nothing for sure. Of note I did get this 18.75" pig jumpin bullhead on the Poison/Fatty. 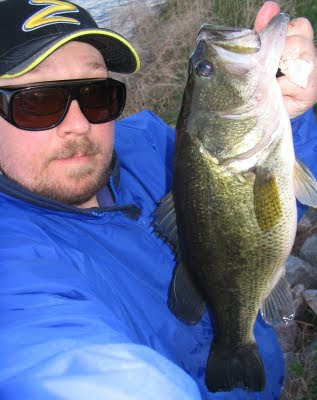 I'll tell you what, that Berkley Havoc Lane's 4" Craw Fatty is a good bait.

As it got dark GOM Willard came over to see me. He actually had been fishing tonight. He ended up giving his bullheads (orange's and 1 silver) to GOM Lee Anders grandson to take to Lee Ander. Willard didn't see the pike, so I showed him the picture on the camera.

Also of note tonight Conservation Officer Kuske showed up for a few minutes. He didn't come over to talk to me, so I didn't get to show him the pike pictures. There were several boats tonight fishing the South GOMH.

I left about a quarter to 10 or so. Didn't even try for silvers.
Posted by Basspastor at 11:48 PM