Because it's Memorial Day weekend the Minnesota Bass Opener is a 3 day affair.

Today my lower back was giving me issues and I wasn't sure if I was going to get out. It was cloudy and breezy out of the SE. I eventually did get out on Platte Lake around 4:30PM. I headed East.

I started on a few docks that are usually unproductive and they lived up to expectation. After wasting 20 minutes I finally got into more productive water and nabbed this pike off a dock on a small black/red Hart spinnerbait. 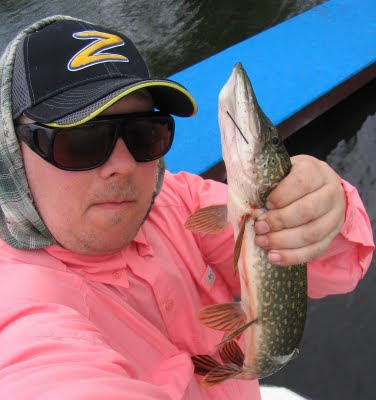 As you can see I'm sporting my new cantaloupe Columbia Men's Airgill™ shirt with homemade hoodie. Columbia sent me the shirt to try along with some Drainmaker™ shoes. Today was in the 80's and humid, but with the breeze that Airgill shirt worked it's magic and I wasn't the least bit hot even with the sleeves down. I'm loving the shoes as well and they arrived none to soon as I've been getting my feet wet the past few days.

Anyway I made my way West and was into a good area and I popped this 16" on the Hart spinnerbait. 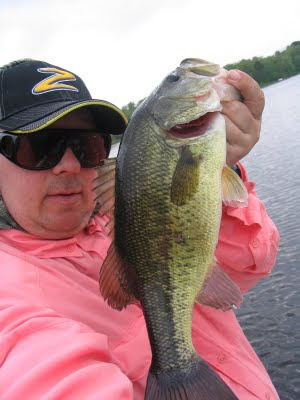 A little after that I got a 14.25" largie on the chart tiger Stanley Phantom topwater. Next I popped a couple of pike on the white Havoc Grass Pig, losing the Pig on the 2nd pike. I put a Big Bite Baits Cane Thumper on the 1/4oz weighted 5/0 Moaner Stroker Hook. I won those Moaner hooks earlier this year. It sure is nice to get to try something and see how it works for free. I popped one more bass on the Hart Spinnerbait, then I had a small pike destroy the spinnerbait. At that point I decided to head back East. I had my red shad Zoom Super Fluke bit off on the very first dock. It's possible I broke my line on the boat lift, but I think it was probably a pike.

As I worked my way West a guy came out to fish on his dock and got a crappie. I went around him and missed a fish, I think it was a bass, on the Cane Thumper. I covered an area that usually has rice and pads, but none were to be seen and no fish were there. Finally I got to some more docks. I popped a 15" largie on the PB&J Yum Wooly Bug along with an 11+" and a 12". That was the end of the PB&J bait so I tried a orange crawdad Yum Wooly Bug and got a 12" on that. I was in the wind and struggling with boat control thanks to my broken trolling motor bracket. I did pull a 12" and 14.25" off docks with the Cane Thumper as I drifted by.

I made a move, a little later than I should have to Loon Sex Bay. I started working the Phantom and had a couple of misses on that before I connected with a 14" largie. I was covering water quickly and I decided to give the Cane Thumper a try and that paid off with a pike and 3 ok sized bass. I think I figured out how to set the hook on those swimbait bites. It's kind of a surging sweep set. I left the fish biting as I had to get back and get the boat on the trailer before it got to dark.

I stopped at the GOMH on the way home and didn't get a bite.

All told for Bass Opener weekend this year I landed 51 bass and 39 pike.
Posted by Basspastor at 11:18 PM