On Saturday the wind blew out of the East all day. Normally that makes Eddy's hot. It didn't. I arrived at 8PM and set up on the North Jetty Harbor Mouth. Much to my astonishment nothing happened. Finally at 10PM I went to chuck raps off the North jetty corner and that didn't work. The wind was about 5 mph less than last night. I went to the lighted bobber and a leech and got bit around 11PM. I lost the fish more than half the way in. It may have been a keeper. About 35 minutes later the bobber was gone and this time I landed it. The fish went 19" and had to go back. 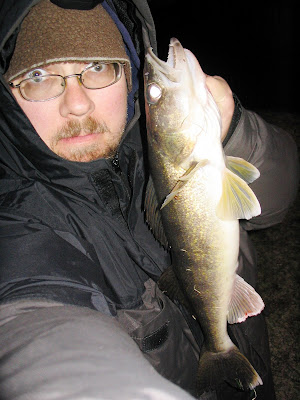 At 12:30AM I went to the truck to take a nap. I got up at 3AM and tried off the South jetty. The wind had picked up some. No luck. A little after 4AM I went back to the North jetty. I did get a bite but I waited to long and it spit the leech. Once the sun got up I tried the harbor mouth, nothing! I left at 6:30AM

I made a quick stop at the bridge North of Shakopee lake. Nothing, but I talked to a guy who said he gets walleye and northern there and bass occasionally.

After getting home and changing some things out I headed to the Grumpy Old Man Hole. There were several trucks parked, but nobody on the NE side so I was happy. My first lure was the Chuck Fall Pike Spinnerbait. I got a 14.5" jumpin bullhead on my first cast and 17.75" on my second. About 20 casts later I got a 16" jumper and that was it. I tried a bunch of lures but got nothing more.

I went to the SE side on the bank and made long casts with an orange swim jig I just won on Ebay with a Havoc Devil Spear Green Pumpkin dipped in Chart. JJ's Magic Dye. I got a 20" toothy bullhead and two 14.5" jumpin bullheads on it and missed a couple of hits. That Devil Spear is the bee's knee's for a swim jig trailer.
Posted by Basspastor at 10:27 AM