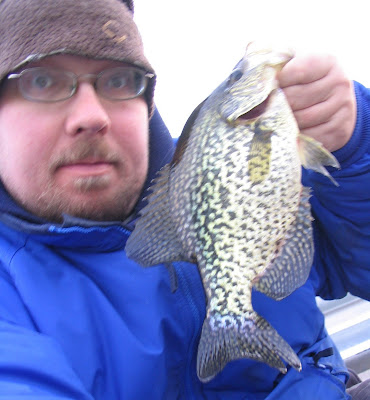 After the slugfest that was Friday night, I figured it might be a good thing to hit the Grumpy Old Man Hole first thing in the morning Saturday and so I did. I left the house about 5:20AM and as I did I wished I had left about 10-15 minutes sooner because of how light out it already was. Wouldn't you know it but a car turned in front of me from 27 onto 8 and they headed straight to the GOMH. The guy was quick about unpacking his gear and went straight to the SW side where I was going to go. I decided to fish on the bridge to the SW, where the people were having lots of success yesterday. I popped 3 nice silver bullheads immediately on the pink Cubby with minnow. The other guy started catching some and a guy and lady showed up and took the SE side. Then after about 15minutes I got a 4th. A man with his son who fished last night showed up and started fishing next to me on the bridge. I got a bite from a nice bass and had to go down to the SW side to land it. I'm not sure what happened but my line broke and I almost lost my wing it bobber, but I did get it back.

I went back up on the bridge and re-tied. I decided to try a tube, but I picked a ball head jig that was just a little to big to get the jig head inside the tube. I did catch one small silver that I threw back on a smoke tube. I tried a lemon tube, then I decided to switch jig heads, to an elongated lead tube jighead. I went with a red sparkle/smoke tail color and snapped two nice silver bullheads right away and I thought I was on to something but unfortunately the silver bullheads almost totally shut off at that point. My next 7 fish were all jumpin bullheads caught on the SW side. I stayed until about 10:30am.
Posted by Basspastor at 2:01 PM