I entered and was randomly selected by the Outdoor Blogger Network to do a product review on four Berkley Havoc baits.

If you were anywhere near the Bassmaster Classic this past February no doubt you heard about the new economy priced Berkley Havoc Plastics. If you weren't paying attention to the Classic and don't care about professional bass fishing maybe you haven't heard about them. For instance I am not aware of a store in my area in Central Minnesota that is carrying them Spring.

The four baits I received to review are the Bobby Lane designed Craw Fatty™, Gary Klein designed The Deuce™, Skeet Reese designed Pit Boss™, and the Mike Iaconelli designed Devil Spear™. These were the four baits rolled out for the Bassmaster Classic and as you can tell from the previous sentence Berkley B.A.S.S. Elite Series Pro Staff are being given credit for inspiring the designs of each bait. Could be marketing hype or could be the truth, I don't think it matters.

I don't believe the baits are suppose to be "scented" but a couple of reviews about the baits I've read suggested it smells somewhat like an old Powerbait formula. I guess I can't make up my mind if that is the case or not. If it does, the scent isn't very strong. The plastic on all the baits is soft, but not so much so that I would call it a wimpy weak formula thus the plastic is reasonably durable.

I will do my reviews in order of preference for the baits: 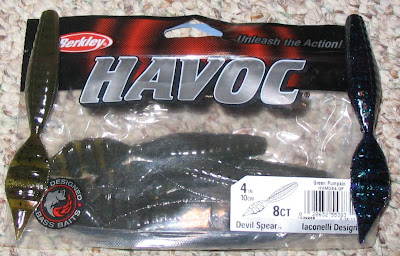 The Devil Spear has to be the most original bait of this crop. The Devil Spear is 4 inches long and a serious piece of plastic that comes in at least 10 colors; I was sent a pack of June Bug and Green Pumpkin. The bait gets it name mostly from the unique ribbed spear shaped tail. The original intent for this bait was to be a compact bait good for punching heavy cover with a stout 5/0 flipping hook. However, when I saw the action of it's tail on a You Tube Video before I ever received the bait I was fixated on one thing and one thing only. I wanted to use the Devil Spear as a swim jig trailer and that's it. The ribbed spear tail's action is a dead ringer for the tail of a baitfish propelling the fish through the water. Rigged on a swim jig it gives an incredible baitfish profile and action just like I thought it would. It can also be rigged on a weighted swim bait hook and be used as a swim bait.

As a swim jig trailer I have only thrown the Devil Spear for about 30 minutes from shore. With the weight and compact stature of plastic you can throw even a light swim jig a very long ways; Swim jigs are definitely a bait where distance can matter. In the 30 minutes I caught a pike and a couple of bass and had a couple of other hits that came off. One thing that is nice is that you can rig up the Devil Spear out of 4 different sides on a swim jig which adds to it's shelf life.

From what I have seen I give the Devil Spear an A-. 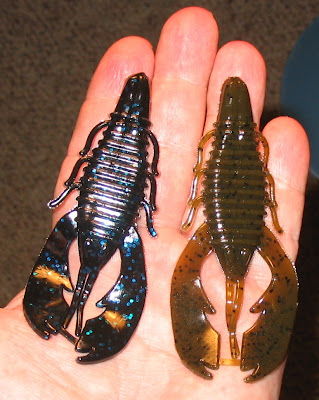 Aptly named the 4 inch Craw Fatty kind of reminds me of a hybrid semi-beaver/Chigger Craw. It's body is wide and thin with Chigger Craw arms. The body is detailed with little ribs, little legs off the side, raised eyes and two plastic strip antenna in-between the craw arms. The Craw Fatty comes in at least 10 colors of which I was sent black blue fleck and green pumpkin. Texas rig it, use it as a jig trailer, or chatter jig trailer is all good. I read somewhere else that it skips well and makes a serviceable topwater toad.

I used it as a a chatter jig trailer and this is some of what I caught on the black blue fleck: 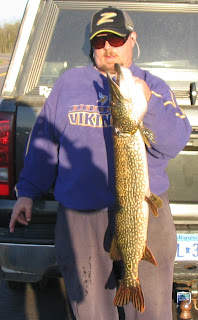 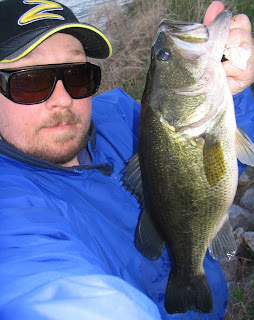 I really like the Craw Fatty, I also give it an A- 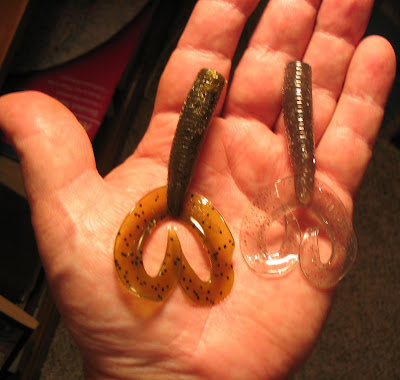 There isn't to much original or exciting when it comes to the The Deuce; It's a 3 inch double tail grub that Berkley says has an extended body to accommodate a bigger hook and specially designed twin tails that are suppose to move at very slow speeds. You couldn't prove either of those things by me because I just don't own many double tail grubs and the one's I do own are buried somewhere. It comes in 10 colors and I was sent smoke sparkle and green pumpkin. I used it on a ball head jig and as a swim jig trailer. No luck with it as a swim jig trailer, but the fish didn't seem to want a swim jig that day. I did catch quite a few fish either jigged or straight retrieved on the ball head jig, but the fish seemed to run small.

I think it's a reasonably good bait, so I'll give it a B-. 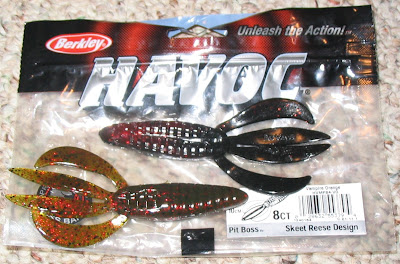 I guess you would call the 4 inch Pit Boss a creature bait. It's got kind of a very elongated tear drop shaped body with ribs that are mostly on one side and off the bottom it has two saber tails and two tails that come straight off the bottom. The saber tails give a lot of kicking action when pulled through the water. They come in at least 10 colors and Skeet gave some of them original names. I was sent California which is kind of a brown pumpkin with lots of red fleck and Vampire Orange which is black and red. It is designed to be a flipping bait, presumably Texas rigged and that is how I fished it. I was excited about Vampire Orange because black/red is a good bowfin color. So far I have given the Vampire Orange a workout and caught several bass and a couple of pike. I think I may have had 4 bites on it from a bowfin but I couldn't hook up. Sometimes hooking up was a problem with both a 3/0 wide gap or 4/0 wide gap hook. I tried it as a chatter jig trailer but wasn't impressed as the saber tails seemed to lose their magic. I think the bait is probably most effective when hopped a foot or two and then letting it fall with either a horizontal or vertical retrieve. Because of the saber tail action you can swim it as well.

I was least impressed with the Pit Boss so I'm giving it a C.

One great thing about all the Havoc baits is they are $2.99 a pack and can be found at Tackle Warehouse and Bass Tackle Depot.

Other reviews of these Havoc baits can be found at:
Lunker Hunt
Man Versus Fish

Disclaimer: The Berkley Havoc plastics were provided to me free from Berkley via the Outdoor Blogger Network. Other than the free product I was not paid to write this post and it is my honest opinion.