Another Night at Eddy's with GOMH Stop.

The night ban goes into effect tonight at 10PM, so that leaves two and a half over nights to take advantage of the Eddy's Jetty night bite. Sunday was sunny and warmer with a good wind out of the East and that East wind should be good for fishing the Eddy's Jetty which is on the West shore, but if you read my last report Saturday night was inexplicably a bust.

I arrived at the Jetty around 9:30PM and it was pretty much slick with clear skies. I went to the North Jetty corner and threw out a leech with the lighted bobber. After about 10 minutes it got weird. With no hint of a bite my bobber started moving toward the Jetty and off to my right. I started reeling in and the movement to the right was more pronounced but there didn't seem to be a fish there and the bobber was up on the surface. The more I reeled the farther to the right it went. It seemed that I somehow my line got stuck in a rock that was well to the right of where I cast. As I got to were the "rock" was my bobber went under and I thought I was going to lose the bobber. But then the bobber came around and I was hung up, but not on a rock, but a very big fish. I had the fish on for about 40 seconds and then it came off. Could have been a muskie, pike, walleye, carp or smallie.

Here's my theory, my fishing line which was sinking got grabbed by a crayfish. A big fish then picked up the crayfish getting my line in it's mouth. As I reeled in the line passed through the fish's mouth until the fish got stuck by my hook. Man I wish I would have landed it or at least figured out what it was.

Anyway about 20 minutes later I caught this fellow on my line. 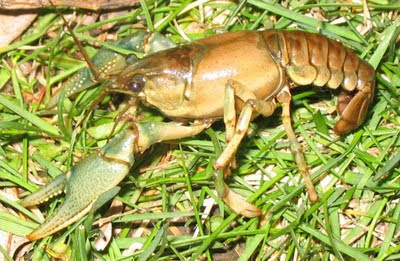 I had crayfish on my line 4 or 5 times throughout the night.

I tried Leeches and throwing raps but basically nothing happened until about 1AM when I put on an old clown Rapala Husky Jerk 14. I decided to give it a twitching action in the calm conditions and I got a hit but it got off. About 10 minutes later I landed one that was just over 18 inches and so in the protected slot.

After a little while I decided to change colors to a silver blue black Husky Jerk 14. I got a hit on that and landed my first keeper of the weekend at 16".

I went 15 minutes without a hit so then I tried a couple of smaller HJ12's without any luck. Because of the clear skies I thought maybe the glass white HJ14 might work. I had to the middle belly hook off so it wouldn't sink. This lure sort of turned out to be the deal. I missed a hit then on the next cast hooked up with a 17.25" keeper. 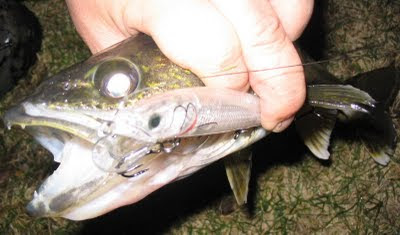 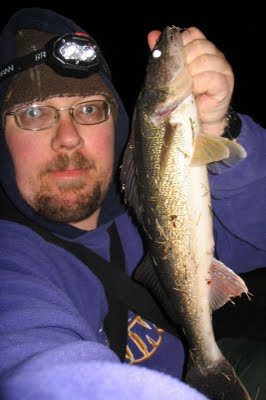 I then had 5 or 6 more hits a couple of which were ferocious, but couldn't hook up any of them. Then the action stopped. I tried switching baits but it went dead. This guy named Luke who I'd talked to a couple of times this weekend came out and got a bite on a leech, so I switched to a leech in the area where I had missed the most hits. After about 15 minutes the bobber went down and I got a 22". Here being held by Luke. 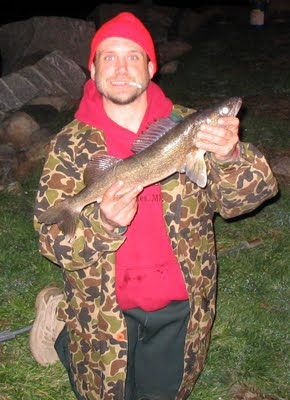 While it was still pretty dark but light on the horizon I got another bite but the fish let go right before I was going to set the hook. It took it down again for a couple of seconds, but then let go and that was it.

When it got pretty light out I caught 2 perch, one of which was nice which I gave to Luke. Luke put it on a stringer which he would later lose when he went to show a security guard the fish and he nearly fell in the harbor in the process. After that bigger perch Luke's bobber went down and he pulled in an eye that I think went 22".

I left just before 6AM.

I stopped at the Shakopee Lake bridge and I think I had a hit on my Strike King Pure Poison chatter-jig, but it got off right away. Wonder what it was?

I decided to go straight to the Grumpy Old Man Hole, where all I could catch was some jumpin bullheads, so I left.
Posted by Basspastor at 4:11 PM