I was not a spring chicken and didn't get to the launch until after 6AM. I wasn't fishing until about 6:45AM and much to my surprise I couldn't see anyone at the spot. As I was getting set up there was a red Lund heading my way. There was a bit of a SW breeze and I got blown towards the North Shore. I ran the trolling motor to get back towards the South shore. As the boat approached he was headed to go between me and the South shore. I yelled and pointed for him to go around the other way. I lined up my first cast of the morning with a white Stanley Jigs Phantom(spook) . Next thing I know the red Lund is passing between me and the South shore and headed right to where my bait is sitting. I was not happy, so I yelled at the guy (I have this on video and will post it when I figure out how to post to Youtube). Anyway if there were fish there, there weren't any longer. In the video if you look close you can see he drives right over where my lure was sitting, before I reeled it in.

Fishing the area I had one hit on the Phantom but it didn't hook up. Next bait in the quiver was a Havoc Lane's Grass Pig (Dipper). I could feel fish hitting it but they didn't hold on so I could set the hook. Next I tried a purple Berkley Frenzy Popper and had a fish hit that and not hook up. I went subsurface with a PB&J Yum Wooly Bug and finally I got a bass. 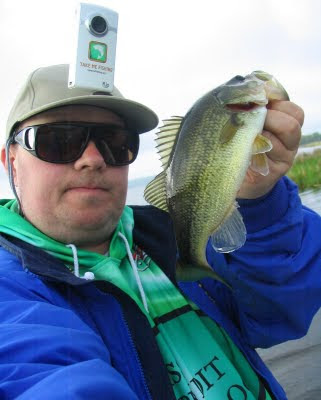 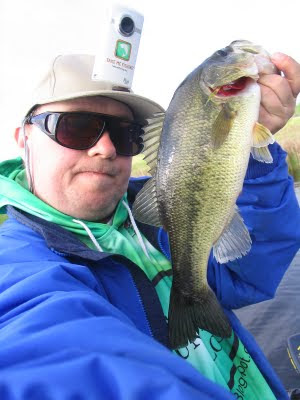 I caught a few more fish but it was slow. Eventually the red Lund came back out of the river. I asked them if they caught anything and the guy swore at me, so I'm guessing that is a no. I could see another boat in the river fishing it's way towards me. They said it was really slow and only got a couple of small fish. I had to see for myself and they were right. The one notable thing is that I caught my first Dipper fish. Actually I got two, one on an unweighted set up and one on a weighted hook. Both fish smacked it and held on.

Eventually I left the river and went to fish the greater Pro. I was throwing the white weighted Grass Pig and I had it get bumped a few times but the fish were not taking it. Finally I had enough of that and switched to a black blue Pure Poison Chatter Jig and got a bass on that. After a while it became clear the fish just were not chasing so I started pitching the Wooly Bug to groups of pads. I was rewarded with my biggest fish of the day at 17.75". 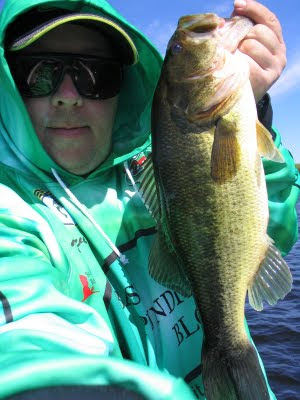 I caught a few more and missed a couple of bites doing that. Eventually I went to where it was calm and looked for fish. Saw one good bass, a few average to small one's and one nice pike. Not a single dogfish. Eventually I got back into the wind and got one on the Pure Poison and an Orange Swim Jig with Havoc Devil Spear trailer. I got a few more hits that didn't hook up and on one of the hits the Spear tail came off. I switched the tail to a 4" pumpkin Action Plastics Grub and got a couple pike. As I was fishing down the shore a couple of guys from the Bass Snatchers came by. They were getting the lay of the land and hadn't started fishing yet.

I worked my way to the GOMH and into Platte where I got a 15.25" on the Pure Poison, along with a couple of pike.

I worked into channel in bay where it was calm and it was dead, not even panfish.

Eventually I worked my way into the Big West Bay. I tied on a baby bass Ninja Spinnerbait and the pike fest was on as I drifted the weed flat in the wind (and it was windy folks). I think I caught about 15 pike and two bass. Eventually I made a switch to a smaller black and red faux Ninja and the bass and pike evened out a bit. I think I finally narrowed down an area that was holding a few bass and I headed in.

It was an ordeal getting the boat trailered in that big wind on a NE shore access, but I did it and didn't break anything. I'm lucky I didn't swamp the boat and break stuff.

Note: My "new and improved" trolling motor bracket didn't survive the first trip. I can still use it for now, but we are gonna need to try something else.
Posted by Basspastor at 10:54 PM

sounds like a fun and interesting way to start bass "season". how do you like the camera?

I like the camera so far. Easy to use. The editing software is bare bones, but that isn't all bad in that it doesn't take forever to produce something; My computer and Internet connection are slow enough as it is.

Great talking with you again ... especially when we are both "on the water"!

As far as those two jerks you got on video ... I still can't believe it ... My wife and I have been watching this over and over ... hard to believe that somebody could be this rude, dumb, obnoxious, pick a word I guess!

To me they did it on purpose. My wife, Deb, thinks the same thing.

She has been down by the Platte River Outlet with me ... and the first thing she said when she saw the video ... "What's wrong with those two morons? Why did they not just go around Dave on the other side"???

Worst case of boating/fishing idiots that I have seen in over 50 years of fishing!!

good to know about the camera. I've been shopping for some new video equipment. Thinking of getting something similar

At least they didn't fish their way right past me like a couple of Kayakers and another boat did in 2008. I couldn't believe they didn't have the courtesy to stop fishing as they went past me.

You can read about that one here:
http://basspunditflb.blogspot.com/2008/05/mn-bass-opener-2008.html